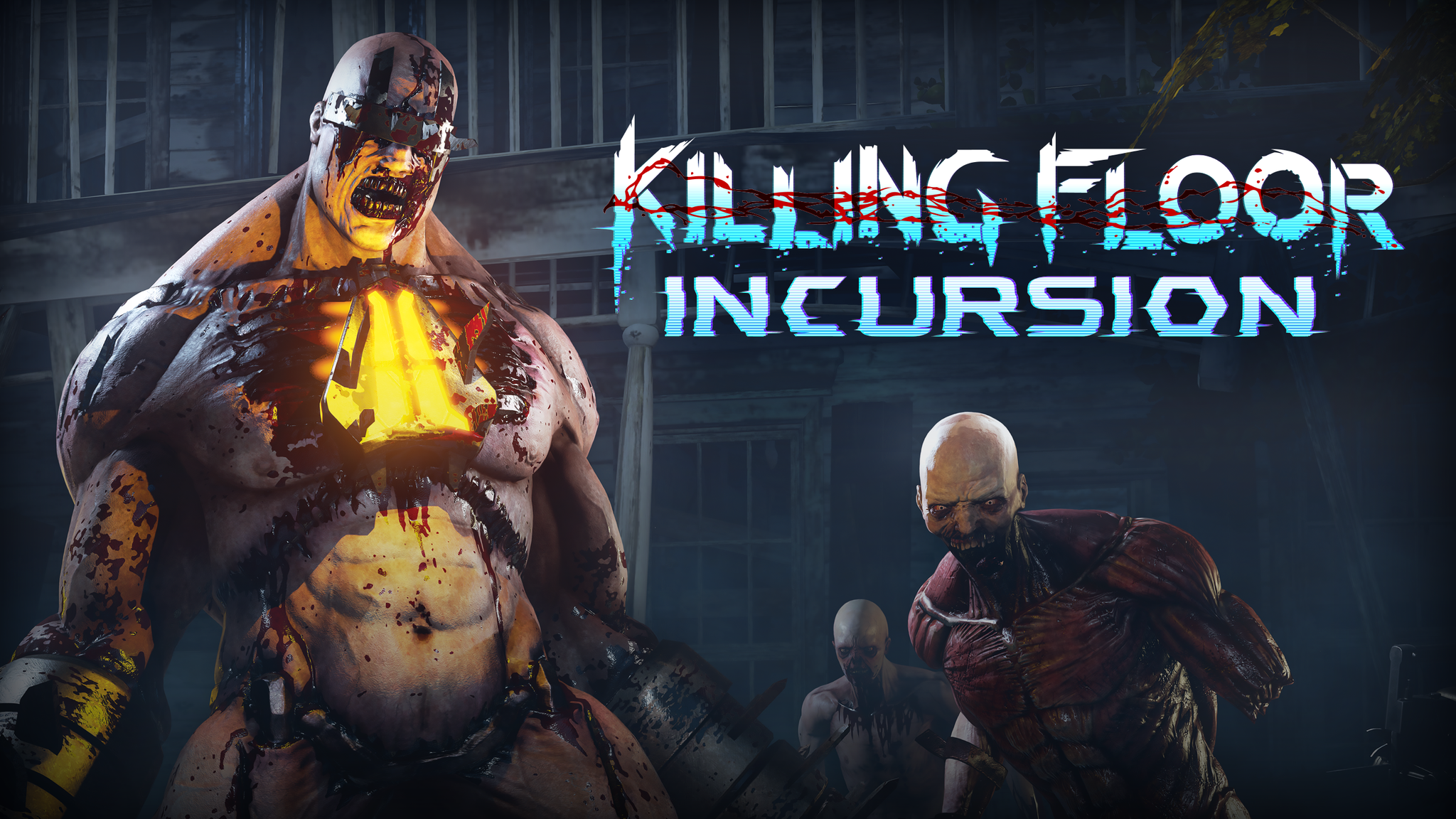 Edtior’s Note: Today we welcome yet another new contributor to the review staff here at PSXE, Kurt Collins. A former Gamespot.com staffer and huge VR fan, Kurt is a veteran writer who brings a lot of value and insight to our collective process, and will likely be handling most of our upcoming VR reviews. – Reviews Editor, Ryan Hartmann

Since the 2005 release of Monolith’s, F.E.A.R: First Encounter Assault Recon, I have been on a personal mission to find an equivalently spectacular horror first-person shooter. Before you start spamming my inbox with a list of everything released in the genre since 2005, I am willing to go on record to say the following: while F.E.A.R. was not the pinnacle of the genre, it was one of the most enjoyable story-based gaming experiences of this genre in which I’ve had the pleasure of partaking.

So when I got the opportunity to review the virtual reality version of Tripwire Interactive’s, Killing Floor: Incursion VR, I jumped at the opportunity. I was ready with my PlayStation VR, two move controllers, and a fresh pair of underwear in case Tripwire brought their “A game”.

The premise of the game is simple: you’re an elite soldier who is a part of the Horzin Security Forces. However, you’ve been injured and need to spend some time convalescing in a virtual world while they operate on you. How very meta. Incursion VR starts you off simply by giving you unlimited time to get ready in a training room so you can learn about movements and weapons usage.

Movement in the game follows the now-standard PS VR gaming mechanic of pointing your controller at the location where you want to move and being teleported there. You cannot move infinite distances, however. You only have a certain amount of energy (after all, you’re still recovering) and can only teleport short distances. The longer the teleport, the more energy you expend, thus leaving you bereft of energy until it regenerates. So be careful and take short hops. In case you ever want to know how much teleportation energy you have left, you can always look at the indicator on your left hand.

In the realm of weapons, the training room gives you ample education on how to use pistols and knives. You have two shoulder holsters that allow you to easily carry pistols on your person. You also have a flashlight on your chest that serves a dual purpose: lighting your way in dark place and also revealing hidden objects via functionality similar to x-ray vision. Finally, you have two holsters on your back allowing you to carry two knives (and later in the game, shotguns, axes, and more). In order to access those weapons mounted on your back, you simply reach over your shoulder like you’re a character from Conan the Barbarian.

Originality in the genre is dead. Whether you’re playing the newest Resident Evil or Tripwire’s Incursion VR, you’re likely to be killing some flavor of zombies. I wouldn’t be giving away too much of the plot by notifying you that every step you take in Incursion VR brings you one step closer to killing yet another zombie. While they’re called Zeds in Incursion VR, that’s merely a synonym for zombie. Just once I’d like a game that blends zombies, ghosts, gremlins, demons, or any other type of scary creature you can dream up. While Tripwire did give you a veritable smorgasbord of new types of zombies to dismember, they’re still pretty much all rotting flesh of some sort. Some walk upright on two shuffling feet, while others are spider-like in their appearance. Some partially disappear from sight, while others just take a lot of work to put down. Like fine wines, Tripwire certainly gives you different varietals of zombies to put down.

With all that said, virtual reality zombie stomping isn’t old enough to be played out just yet, and Incursion VR does a decent job of giving you some fun ways to kill them. My personal favorite is dual wielding axes. As long as you don’t mind getting up close and personal with your friendly neighborhood zed, there’s nothing quite like chopping a zed’s head off using dual-wielded fireman’s axes. The raw bad-assery you feel just from carrying an axe in each hand is enough to make you stand a little taller. There were moments when I was standing amidst of a mob of zeds only to catch myself screaming out in challenge to the oncoming horde. Incursion VR shines in those moments when it facilitates the replacement of reality with fantasy, and I feel like I was born to do one thing and one thing only: kill zeds.

If you’re not a fan of getting up close and personal with the undead horde, you can always look down the scope of a sniper rifle and kill from the rooftops. In fact, the controls for the sniper rifle were quite inspired. Incursion VR gives you the capability to use it like a true two-handed weapon by allowing you to pull back on the turn-bolt just as you would in real life. The only missing element is the actual resistance you’d feel if you were really doing it. They tried to make it life-like, and mostly succeeded. As such, the controls with the sniper rifle are truly sensitive; move even a little bit, and you’ll miss your shot.

FRIENDS. HOW MANY OF US HAVE THEM.

Co-op mode is where this game gets truly entertaining. As enjoyable as it is to lop off a zed’s head while dual wielding axes, it’s even more fun when you have a friend along for the ride. The co-op story mode is where you get to have some fun and watch your friends do crazy things. There’s nothing like watching your friend dismember a zed, pick up the severed arm and start using it to slap around the next one. The creative and often hilarious antics that the co-op story mode allows for made it far more entertaining than the solo story mode.

If you don’t want to go through the story again, you can always just battle it out in Holdout. Holdout is an arcade-style mode where you and your friends defend your position to the last person standing. You’ll have to use every trick in your arsenal to stay alive as the constant wave of zeds just keeps getting ever more difficult to eliminate. If nothing else, it’s a great cardio workout as you physically duck, strike, thrash, and shoot while trying (in vain) to stay alive. As is customary, there are leaderboards that allow you to rank yourself against others based upon how long you are able to stay alive. You better get in shape because this part of the game requires true stamina.

THE BUGS (NOT THE IN-GAME SPIDERS)

Unfortunately, there were a few idiosyncrasies in this release of the game which I’m hoping get fixed via patch updates. There were some issues with controller calibration which were specific to Incursion and were not occurring in any of my other shooters. While I’ve had controller calibration issues before, they are particularly bothersome when they happen in shooters.

The most annoying issue, though, is something I’ve noticed in other virtual reality games: horrible (or non-existent) collision detection. My weapons go right through each other. While I understand the difficulty involved in making my two virtual axes collide with each other, it definitely breaks the illusion. With that said, I’ll give Tripwire the benefit of the doubt that this was a deliberate development choice they made in the product, and I’ll live with it… for now.

Along the lines of collision detection, though, what bothered me more is the number of times I saw a zed’s limb poking through a door. And to make things worse, in almost every case, I was able to use whatever bladed weapon I had in my possession to kill the zed behind the door without even opening said door. All I had to do was chop through the door! As I said: I know this stuff is incredibly difficult. However, it gives the game an unpolished feel.

Despite the minor bugs here and there, I do enjoy Killing Floor: Incursion. It has already entered my regular rotation of games, and I have no doubt I will be playing it regularly for the next several months. Killing zeds is a fun way to get in my daily exercise requirements but, more than that, the co-op mode can truly be a blast. If you’re looking for something you don’t have to commit to in order to enjoy yourself for a few minutes, Incursion will do the trick.