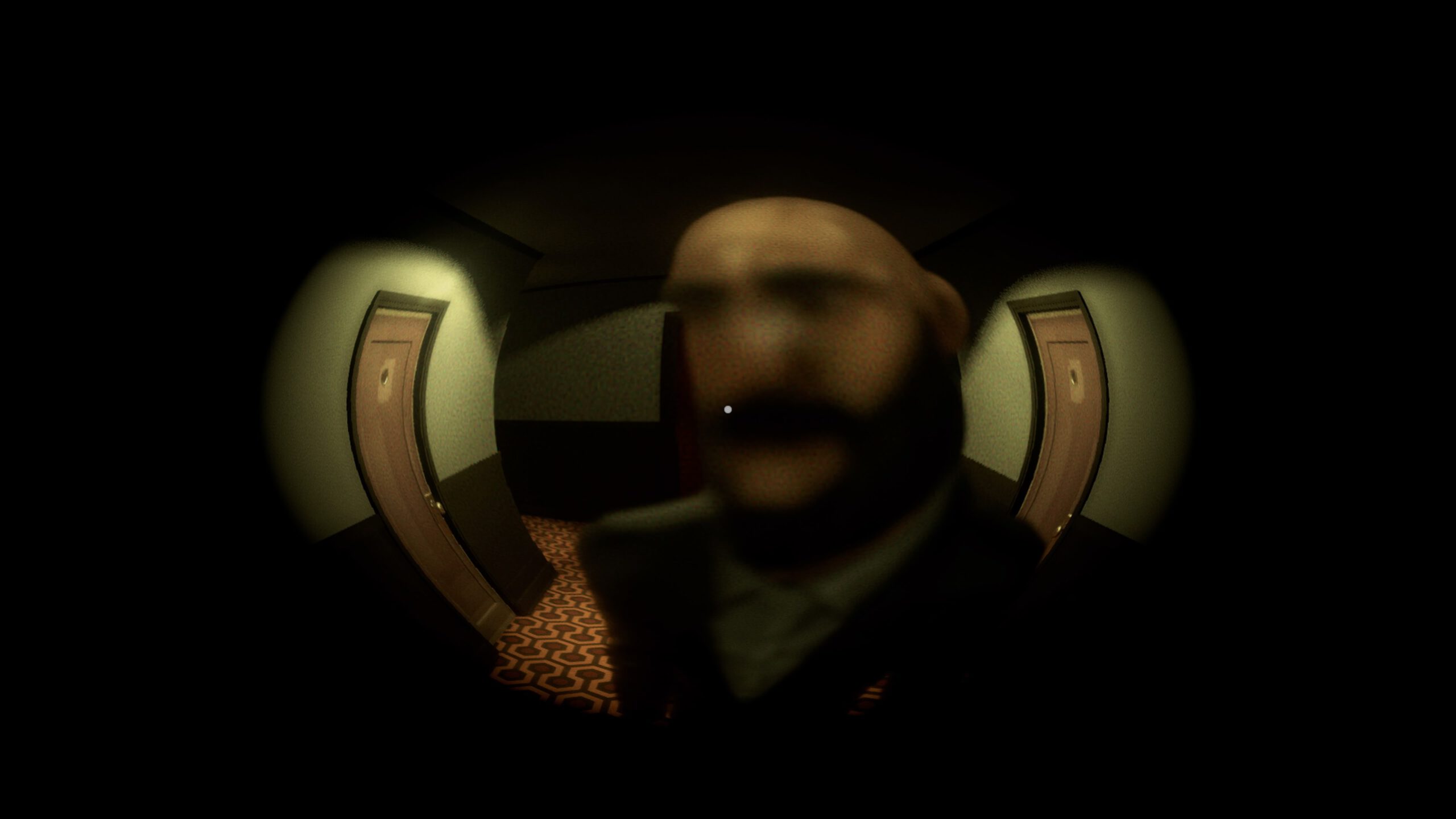 It is rare to come across video games that can capture the artistry of great cinema. Twelve Minutes nails the makings of a modern classic mystery thriller with grounded themes, a fine sense of aesthetic effect, and palpable foreboding. Developer Luís António effectively conveys emotion with cinematic language. He also commits to what games can achieve mechanically, resulting in a mature interactive experience you won’t want to miss.

Twelve Minutes takes place in one apartment, and you play as an average Joe who comes home to his wife. She welcomes him and hints at a special surprise that evening over dessert. Whatever way the player decides to spend time with the wife, a man will come knocking on the door claiming to be police several minutes later. He arrests your wife of murder, ties you both up, and ultimately starts choking you out, all in a bid to find a valuable pocket watch of hers. Once he beats you up or kills you, you are back twelve minutes before what happened. You’re stuck in a time loop.

The characters don’t have names, just “Wife,” “Cop,” etc., a thematic choice in and of itself. This is a thriller that revolves around trust, so you’ll uncover things that make you increasingly question these characters’ identities and intentions. Why is the cop breaking in, what is your wife hiding, and how do you stop the time loop? It’s a deftly paced, psychological mystery that plays on your emotions and expectations. 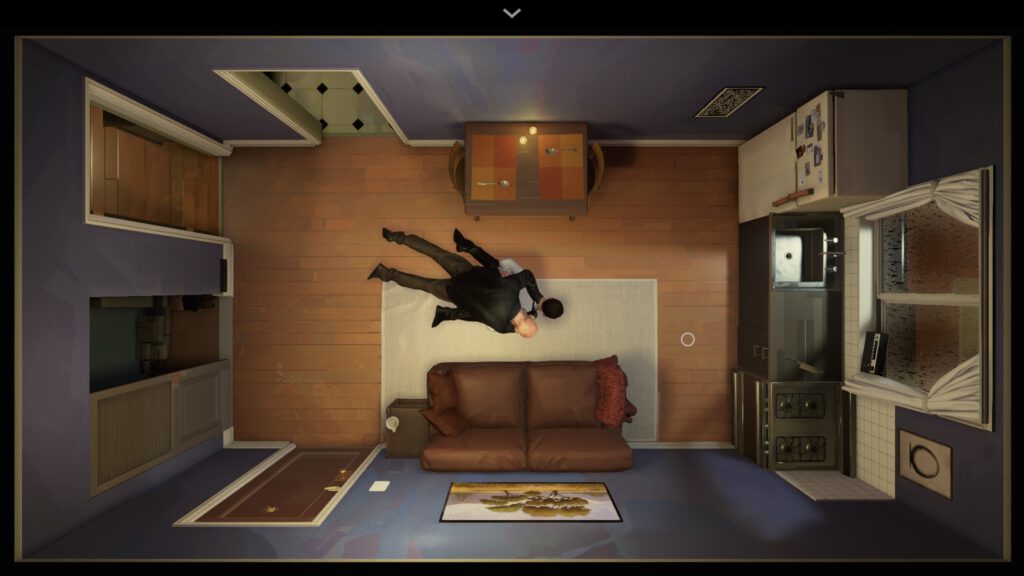 Twelve Minutes presents the story through an overhead view, meaning you’re pretty much viewing everything from on top of a ceiling. It is also an adventure game that works like a point-and-clicker but with no quick-time events like a modern Telltale title. However, you will be interacting with the environment, picking up items, and choosing various dialogue options, such are the genre’s norms. You can also pick up things you’ll be reaching for in an inventory screen to use with the environment. You can also combine and the like, so you’ll need to think outside the box. In that sense, it’s like a puzzle game, but with the added challenge of the game’s real-time nature. 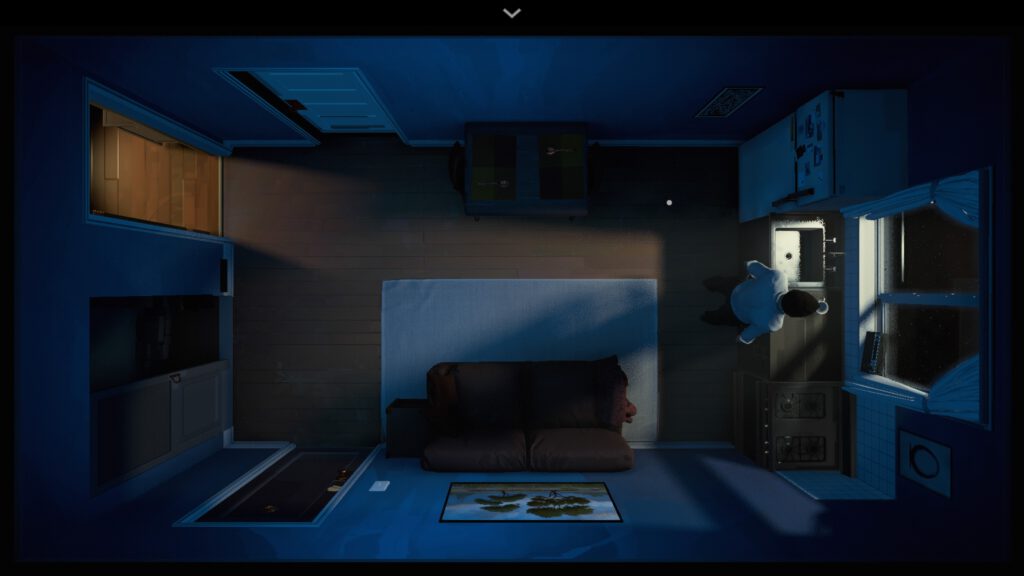 Since the cop comes in and kills you every several minutes, you’ll need to do different things. You’ll want to exhaust dialogue to find out everything you can for your next try (loop), among other actions. The creative thinking this game requires of you is intuitive and delightful. Although the game can be obtuse, and sometimes it doesn’t work in attempts that make sense, there are some real lightbulb moments to be had. And while you take advantage of knowing future events, there is also a feeling of terror that always looms when thinking about the intruder’s visit. While this sounds like it could be repetitive, the prospect of finding new ways to change your fate is always exciting. You’ll discover methods to exploit the situation while also uncovering some plot revelations along the way. The looping does not feel like a chore, which is a miracle. 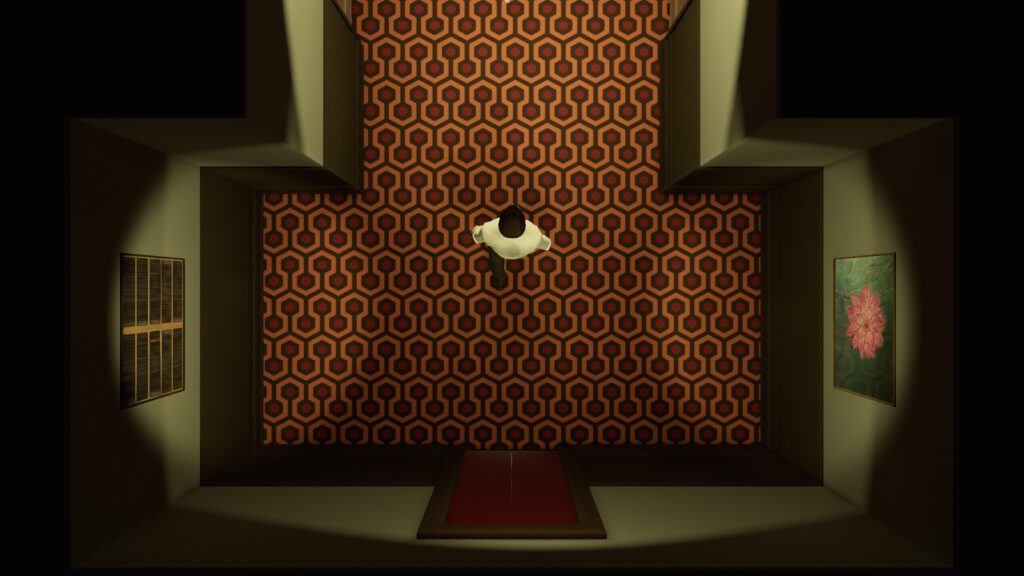 As an indie programmed by one man, the game does not have AAA production value. The characters model faces look somewhat odd when looking at them through the apartment door’s peephole, and a couple of animations similarly don’t look as great up close. However, what the game lacks in state-of-the-art graphics, it more than makes up for in artistic vision. For one, you cannot see the characters’ mouths move because of the viewpoint. While a clever way to save up on the budget, this also means projecting your emotional response onto the characters. This facelessness mirrors the theme of identity and mystery mentioned earlier. And finally, I will say that the motion capture work is top-notch, with multiple animations for the same actions (across various loops) being an impressive feat. 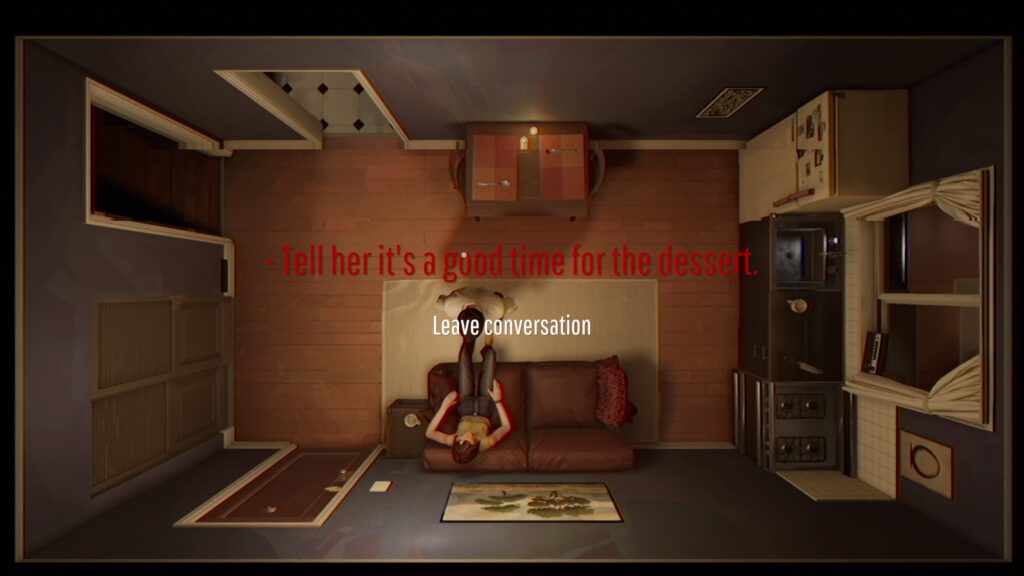 There is also the top-down viewpoint and, wow. It is a stellar encapsulation of all the things the game does well. The environment presentation is excellent from a puzzle game design perspective because it is viewable but holds items less transparent. This means that things are hidden in plain sight but easily accessible if you look hard enough. More impressively, though, this overhead view creates some beautiful imagery. With the hopeless, exposed feeling from the angle with the cinematic uniqueness of its aspect ratio, some scenes look and feel stunning. There is artistic, deliberate lighting for each set, immersing and making you feel different things depending on the situation. I’ve never really talked about framing for a video game. I guess it shows that this game’s visuals bring out the inner cinephile within you. 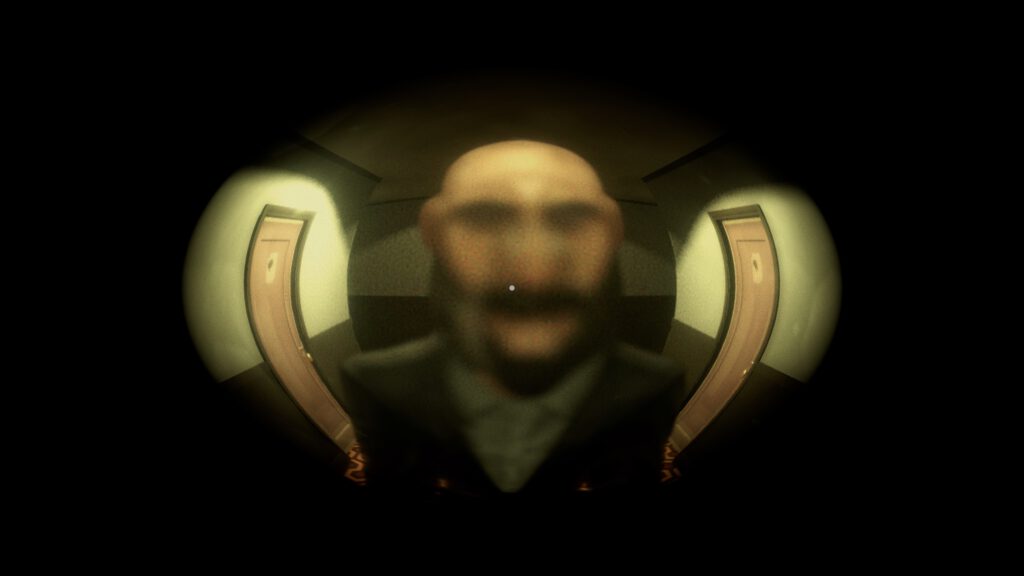 A big selling point for this game is the famous trio cast, the sort of star power incredibly uncommon for blockbuster games, let alone an indie. Case in point, you’ve got James McAvoy as the husband, Daisy Ridley as the wife, and Willem Dafoe as the cop. McAvoy gives an admirable performance as an everyman caught up in an extraordinary situation. However, because he’s the player character, some of his delivery results in jarring tonal shifts depending on your previous actions. Meanwhile, Ridley sounds unrecognizable as a British actor known for playing Rey in Abrams’ Star Wars trilogy. She does wonders for the writing of her character, delivering every emotionally subtle moment convincingly.

Last but not least, Dafoe gives a recognizable performance that still carries the intensity you’d come to expect from him. He adds weight and gravitas to his lines in a frightening, calming, ominous way or all of those qualities concurrently. He’s not just a one-dimensional villain, either — you’ll get to know his backstory, which the writing and Dafoe makes utterly captivating. No matter how many loops it takes, with these performances and the gripping plot, the game succeeds in creating believable characters and their pasts you’ll want to unearth. 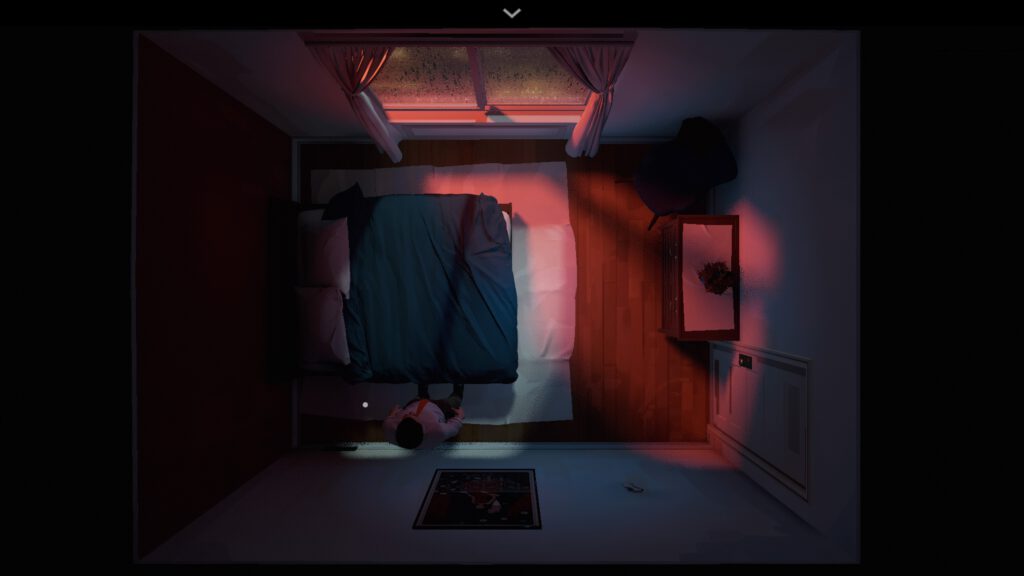 Twelve Minutes is an essential game for lovers of film. Developer Luis António translates his understanding of cinema to create something genuinely deserving of being called an “interactive thriller.” Although it can be frustrating being stuck on what to do next, this is an adventure game drenched in atmosphere and mystery, and you’ll have a hell of a time with it.

You can buy Twelve Minutes cross-platform on PSN here.