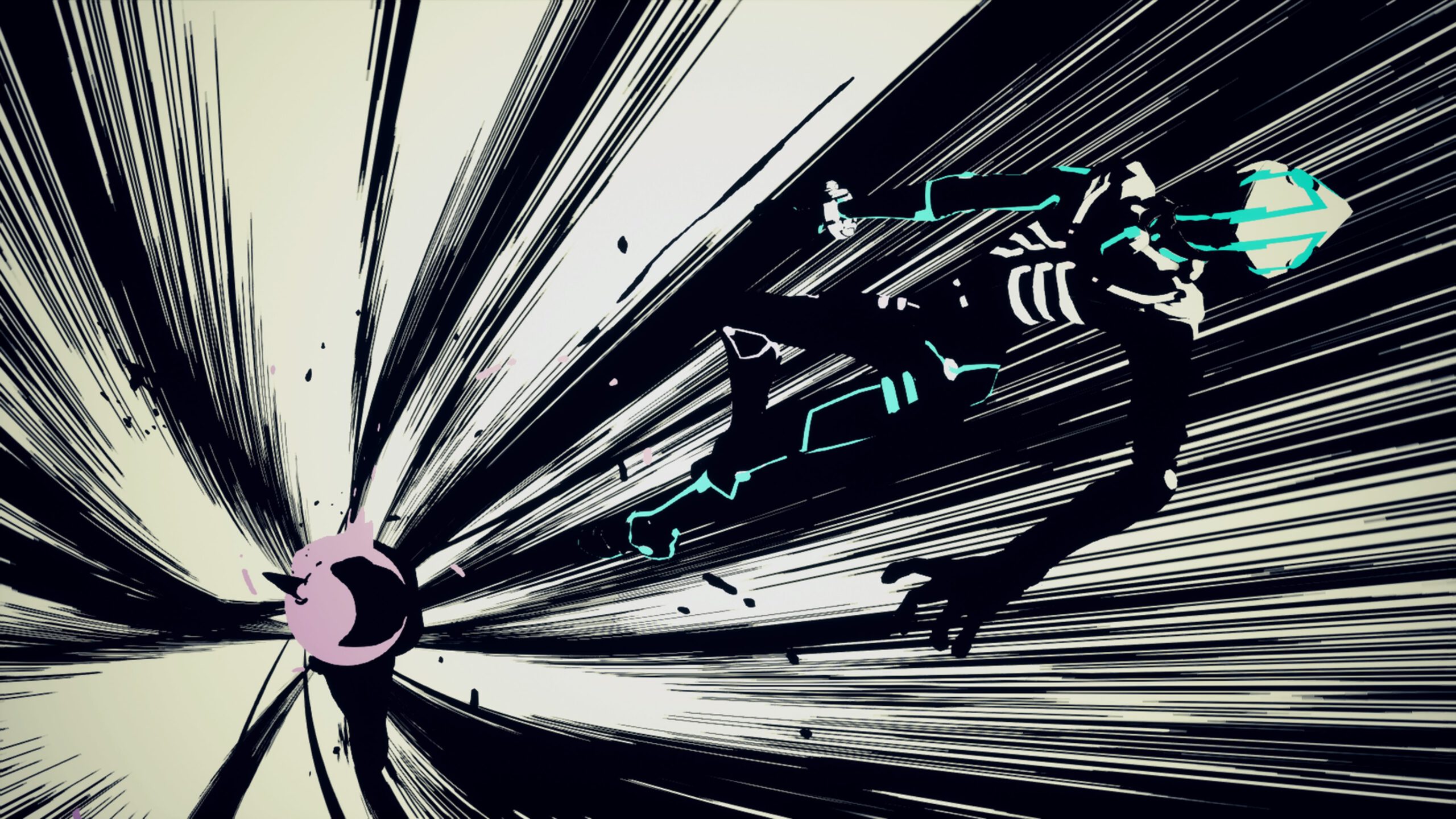 A desirable element in any game is a sense of control and fluidity in movement, especially when you’re playing a platformer. Developer Heart Machine understands this concern, as Solar Ash contains some of the smoothest traversal controls I’ve used in a game. And while I think that its story is its ultimate shortcoming, Solar Ash is an atmospheric sci-fi with vibrant visuals and mechanics that allow you to be a spacetime traveller who trails over an alien world with grace and general badassery. 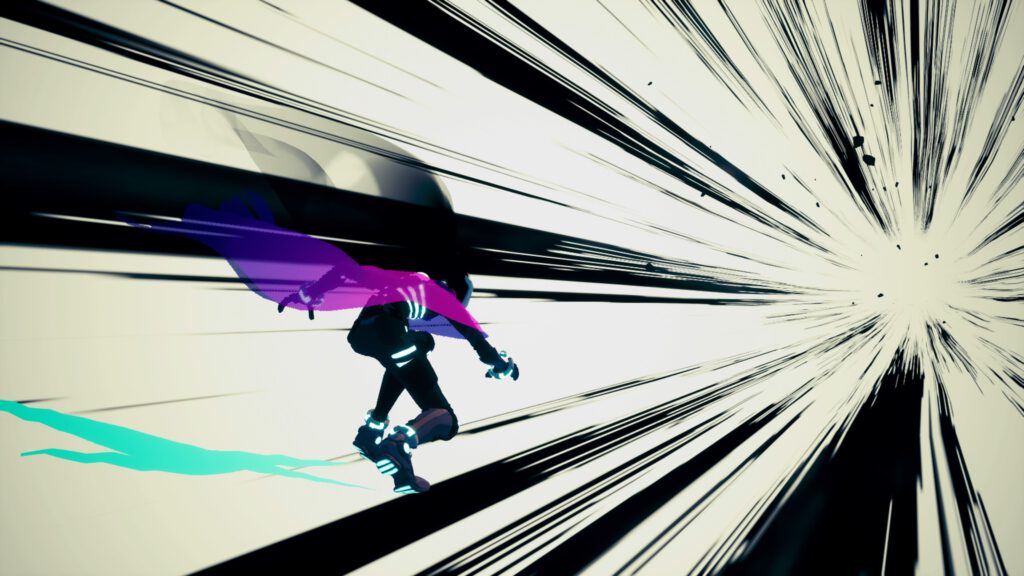 Heading into the rift

The game puts you in the hyper-powered shoes of a “voidrunner,” one of a group of beings who navigate black holes. You play as Rei, a voidrunner who enters the “Ultravoid,” a supermassive black hole that threatens to consume all planets in its path, including Rei’s home world. You’ll cross paths with Echo, a giant ghostly figure who tries to stop you on your mission to activate the Starseed, a device that could destroy the black hole. You’ll have your AI buddy, Cyd, assisting you, and you’ll meet some survivors of the affected worlds on the way.

The story is quite intriguing in its concepts, and the multiple endings are somewhat well-written. However, the delivery fell flat for me. Most of the story is delivered through lore dumping — audio logs that didn’t have me hooked. Even the cast of characters, while likable and well-voiced, weren’t able to get me emotionally invested. I feel this is a game that would be best told without voice acting or an abundance of information, as the atmosphere already hits the mark with its wonderful sci-fi mysticism. There are also Dark Souls-esque “Quests” which you get by talking to NPCs, but they aren’t much better. With such a promising premise, it is a bit disappointing that there are lore dumps — “show, don’t tell.” 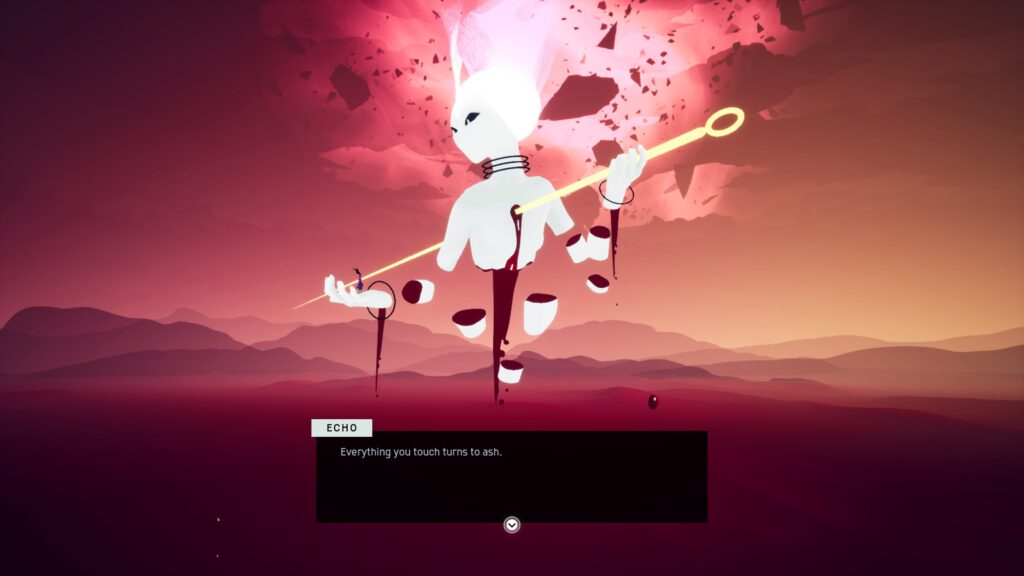 You start in the Crater, a sort of hub which interconnects to seven small areas you’ll unlock and visit. Your main goal is to destroy “Remnants,” gigantic creatures that tower over each locale. These menacing beasts will come out in the open once you eliminate three “anomalies,” which are timed obstacles. Once that’s done, the Remnant will reveal itself and act very similar to how the anomalies work. You’ll have to jump on top of the monsters and reach their weak spot in timed platforming events. Imagine Shadow of the Colossus with no emphasis on combat but, rather, freerunning. Even though you do it several times throughout the game, these sequences are fun and test your platforming skill. 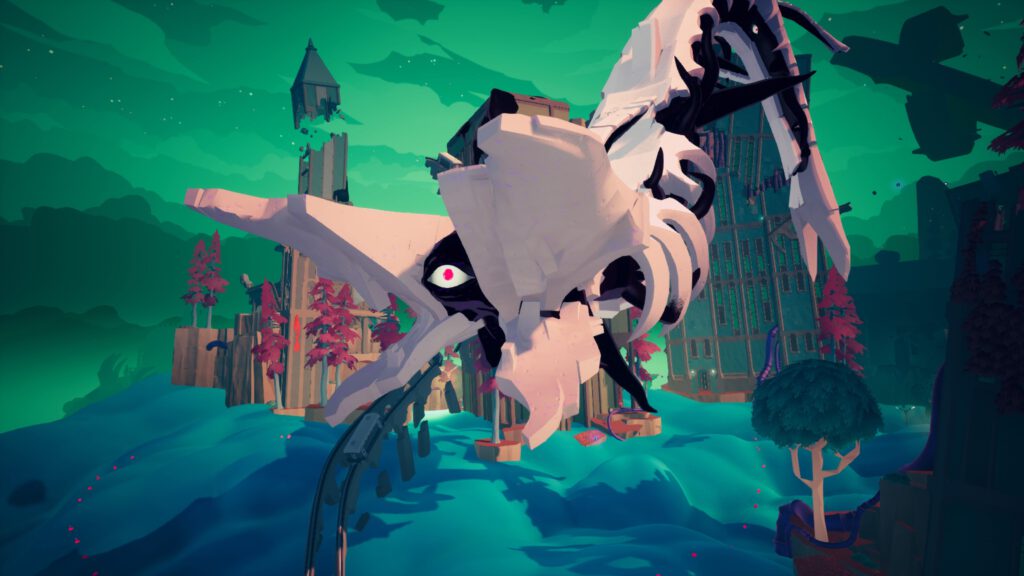 Now with the game’s unique selling point — how it plays. Man, I have never felt so in control of my character’s movement in such a long time. You press L2 to start skating, and this is truly a joy. You’ll glide on rails, hook onto grapple points, and jump seamlessly across platforms. I personally have my skating setting on toggle mode, but you can hold down on it too — either way feels very precise and delicate. Unlike many other similar games, I rarely fell off platforms due to the tightness of button input response and the fair lightness of Rei. To channel IGN, you’ll really feel like you’re a voidrunner. But seriously, the parkour here is smooth like butter. 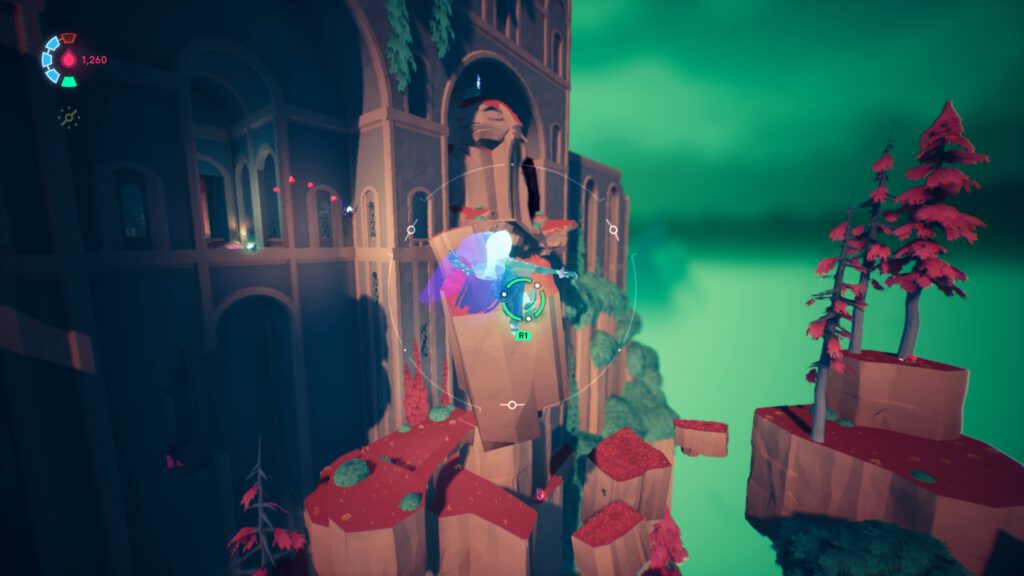 You can also ‘Timeslip,’ which slows down time for you to grapple onto hooks

Unfortunately, the combat somewhat falters. It boils down to pressing square to throw a simple slash of your sword. Some enemies need more hits than others, and fighting them feels like a chore you wanna finish to get back to the stunts. The monsters you face are annoying, throwing projectiles and often making the floor hazardous so that you’ll lose health points. Sure, this tests your swiftness, but it still feels somewhat unpolished because of an absence of an actual combat system. You can dodge, but I did not use it much as running does the trick most of the time. The action requires you to be constantly mobile, but it feels needlessly chaotic, and there isn’t even a lock-on system. It’s a great contrast to the impeccable platforming. 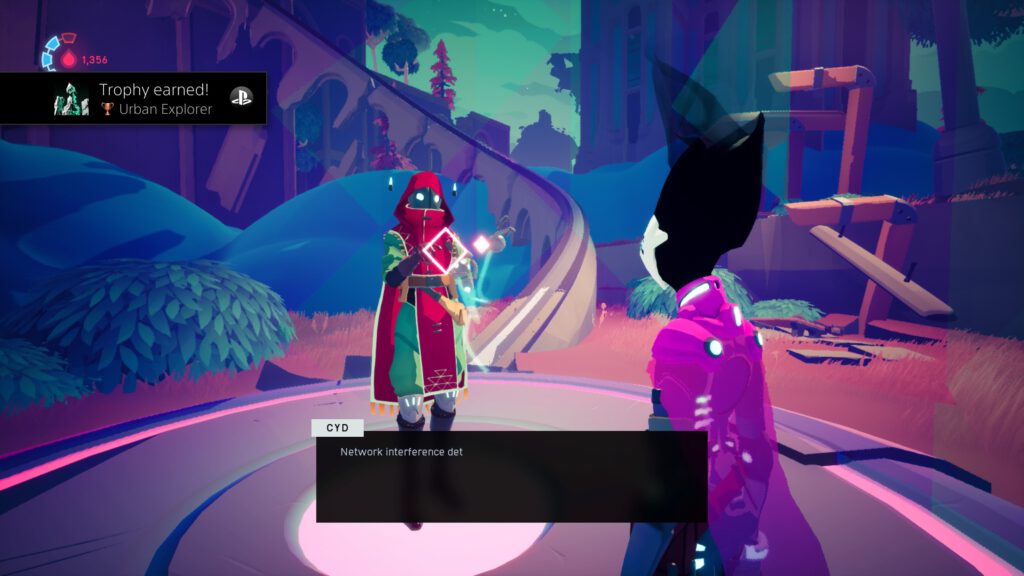 “Plasma” is something you gain when you defeat enemies, and you can pick up breadcrumb trails of it throughout your journey. It is used to upgrade your shield cell, which serves as your HP. Every time you clear an area, the game’s antagonist will take away one health bar from you. As you get further in, the shield repairs get more expensive. It’s fun to explore the environment and collect plasma, something I can’t say for a lot of platformers (ahem, gold rings). There are also stashes found throughout the locations, the underwhelming lore logs mentioned earlier. The primary incentive for getting these is to unlock new suits, each giving a unique effect like doubling attack power or plasma pickup. All decent reasons for wanting to 100% a save. 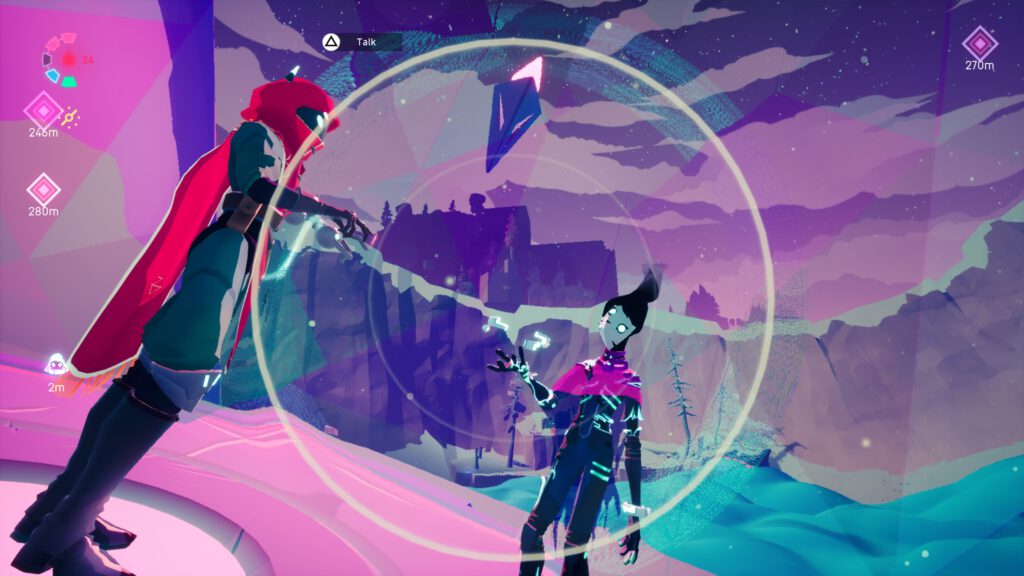 Your “Multi-Tool” will scan for caches nearby, as well as story-required anomalies

The game has a striking neon look, reminiscent of the developer’s previous title, Hyper Light Drifter. The fractured locations you explore in the Ultravoid are consistently pretty — from the city ruins of Broken Capital to the lushness of Eternal Garden. And who could forget the game’s namesake — the solar ash clouds! You can glide on these fluffy things with realistic reactions for specific interactions. If you dash across them, they’ll create big blobs. Moreover, landing on the clouds from a high jump will be like landing in a viscous pool. Those physics are incredibly satisfying, and the environments, in general, are a unique blend of ancient-looking ruin, futuristic technology, and alien but quaint-looking scenery. 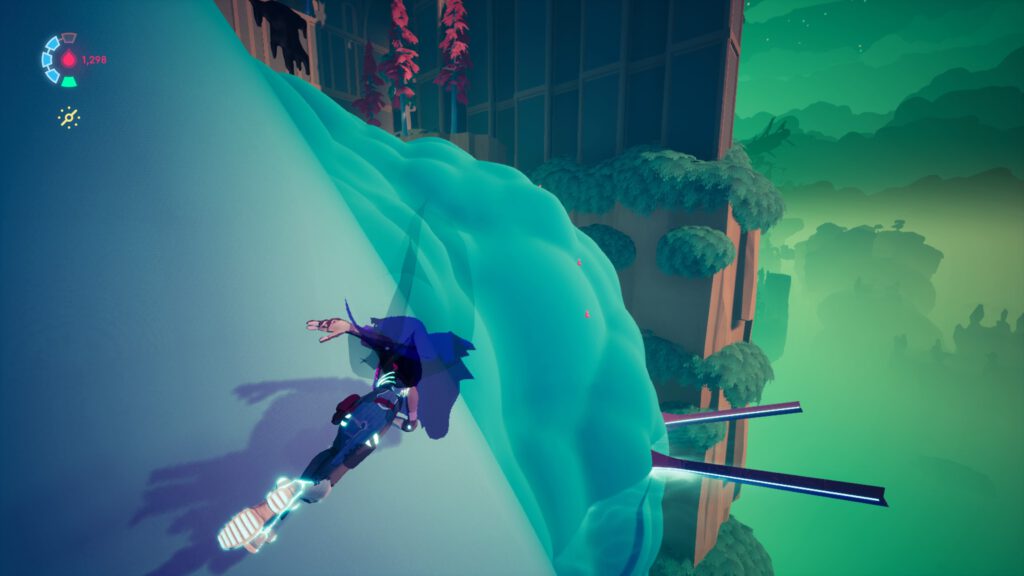 This is the review of the PS4 version, meaning you don’t get the visual fidelity like on current-gen. However, Solar Ash on last-gen is arguably the best way to play on console. The game runs at a near-locked 60fps, dropping frames less frequently than PS5. I don’t say this often, but a silky smooth game like this should have a higher frame rate over resolution and details. Play this version. 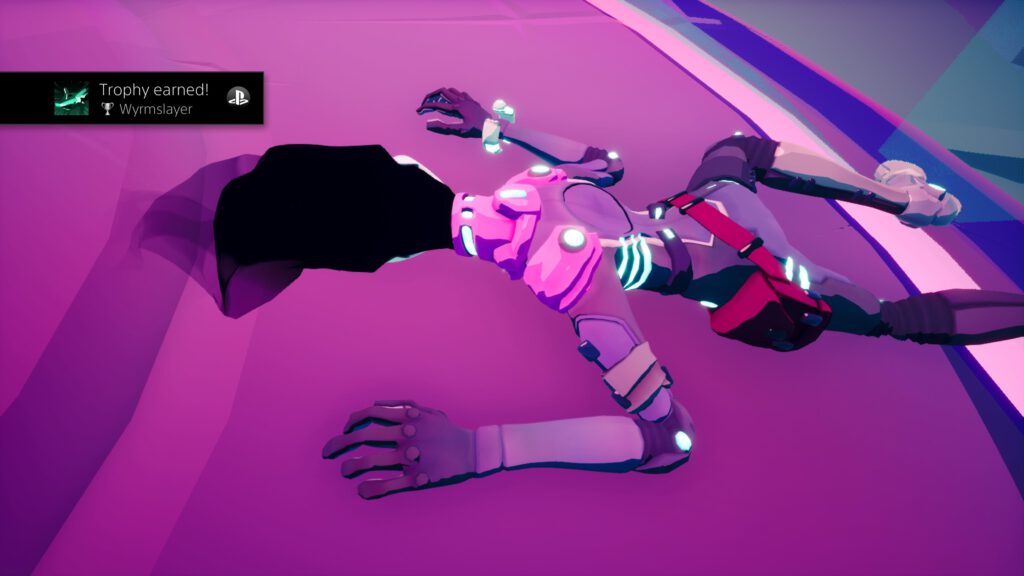 There Is A Light

Solar Ash has some of the best controls in the adventure platformer genre. Putting you in complete control of a badass, freerunning woman, you’ll skate the beautifully neon and fractured world the game drops you in. Sure, the story is underwhelming and the combat simplistic, but the excellent atmosphere and mechanics are worth taking the running jump.

You can buy Solar Ash on cross-platform on PSN here.