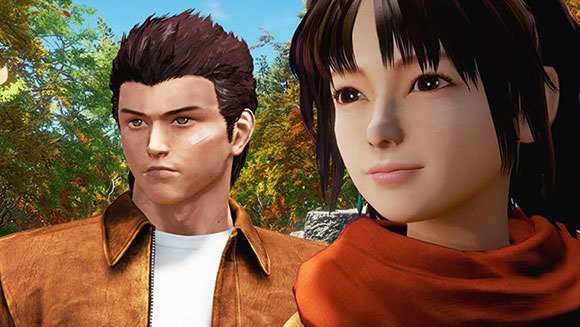 Shenmue 3 is pure garbage. There, I said it. Everything from the plot, characters, voice acting, graphics, and gameplay all feel as though they were made by someone who has never played a game that came out since the beginning of this century.

Say what you want about the first two Shenmue games, but they at least tried to break new ground. Shenmue 3 relies on nostalgia as its selling point, and that is it.

Nostalgia is One Hell of a Drug

Upon starting up the game after escaping from the cave you were trapped in back in Shenmue 2, the game’s environments look decent. But as soon as you take a gander at the character models you know, you just know, how little care was put into the game. Half the characters look like they’re made out of melted candle wax, and the other half look as though they are covered in vaseline.

It’s not just that, some of the character’s bodies are disproportionate and look out of place when compared to the rest of the characters in the game. It’s as though two teams were working on the game’s character models, and neither team was able to look at the others for reference.

Back on Dreamcast, I remember playing Shenmue 2 and seeing a bunch of diverse character models. Many of them were exaggerated stereotypes, but for 2001 it was acceptable as some considered it as breaking new ground by implementing such a large variety of character models. Here, the character models look even more cartoony then they did back in 2001.

I can understand if this was a game like Saints Row, where the point of it is to be goofy and comedic, and used exaggerated stereotypes to make a satirical point. Shenmue is supposed to be a game meant to be taken seriously.

After I walked around the first area of the game for about half an hour, I realized that nothing in the game was going to be done with any sense of scope. You are confined to this one village area for about the first 2 to 3 hours, and everything you can do in this area is excruciatingly dull. You can collect capsule toys just like in the previous games, but because Sega didn’t want anything to do with this game, you can’t even get Sega related Capsule toys or play Sega games at the arcade later on.

You can fight in a dojo against monks to train your fighting skills, but the fighting is so stiff it feels like you’re controlling a forklift. Which is ironic considering that later on in the game you do get to control a forklift, and it feels less stiff than your playable character Ryo.

What sucks about the fighting mechanics isn’t just that they feel stiff, it’s that you don’t even need to memorize the move-set for a particular move. Here, in order to streamline the game in an attempt to make it easier, the developers had the brilliant idea to map a move to one button.

You can level up your move’s strength by performing it multiple times, but the only real useful move is the tornado kick, an attack that causes Ryo to spin around and hit all the enemies around him. You could essentially win every fight in the game by mashing the attack button and performing the same move every single time

There is no reason to slog through this game on the higher difficulties if you could just breeze through it on easy without any repercussions. Another thing that hinders the game is the stamina system. You have to constantly eat food to keep your health bar from depleting, and it’s just ridiculous.

Are you telling me that Ryo is such a weakling that he can’t run for more than 45 seconds without losing his stamina?
And I’m not talking stamina like in a separate bar from your health. No, here your stamina bar is your health. If the developers wanted to implement a stamina system, why couldn’t it be where you have special moves that drain from a separate bar that can only be replenished by eating food. Even that wouldn’t necessarily be ideal, but it would still make more sense than what we got.

Not a Winning Bet

I said in my previous Shenmue reviews that if the first game had been a simple 6 to 8-hour action game, then it could have been a lot better. Well, I’ll say it again. If Shenmue 3 was a simple action brawler with the same story, and all the fat trimmed, then it could have been great. Instead, I had to slog through an unbearably slow game with more filler than a Hostess Twinkie. Just like in the first game in order to progress, you have to talk to people. Even that feels so mundane. You have to talk to one person who will tell you to talk to another person and so on.

After I had done pretty much everything with Ryo in the first area of the game, I decided to try out the site for gambling. You don’t get any money for winning at the gambling section. Instead, you are given tokens that you can’t exchange right away. You have to wait until later on in the game when you find another gambling stall that you can exchange your tokens for money. However, the game doesn’t tell you this, so the first time I went through this game I thought I had done something wrong.

18 Years of Waiting for a 30 Second Boss Fight

When I finally beat the game, I was honestly in shock at how bad the ending was. You fight the final boss for literally 30 seconds; you can’t inflict any damage on him because he’s invincible. All the while, your teammate stands there like a totem pole until a cutscene triggers where he decides to be helpful.

Also, I can not overstate just how horrible it is that you only fight the final boss Lan Di for just 30 seconds. Shenmue fans have been eagerly waiting 18 years to fight this guy, and after slogging through 20+ hours of garbage, you don’t even get to fight him for a full minute. Unacceptable.

The game ends on an undeserved cliffhanger that teases more installments and future DLC.

What a horrible experience this was. Whatever minuscule redeeming qualities this game might have are drowned out by just how infuriating it is. And I can’t think of anybody who is a fan of this franchise that can honestly call this game good with a straight face.

Get this game if you’re a fan of the series, but don’t be surprised if it just ends up making you hate yourself for waiting nearly two decades for what is essentially the video game equivalent of Freddy Got Fingered.