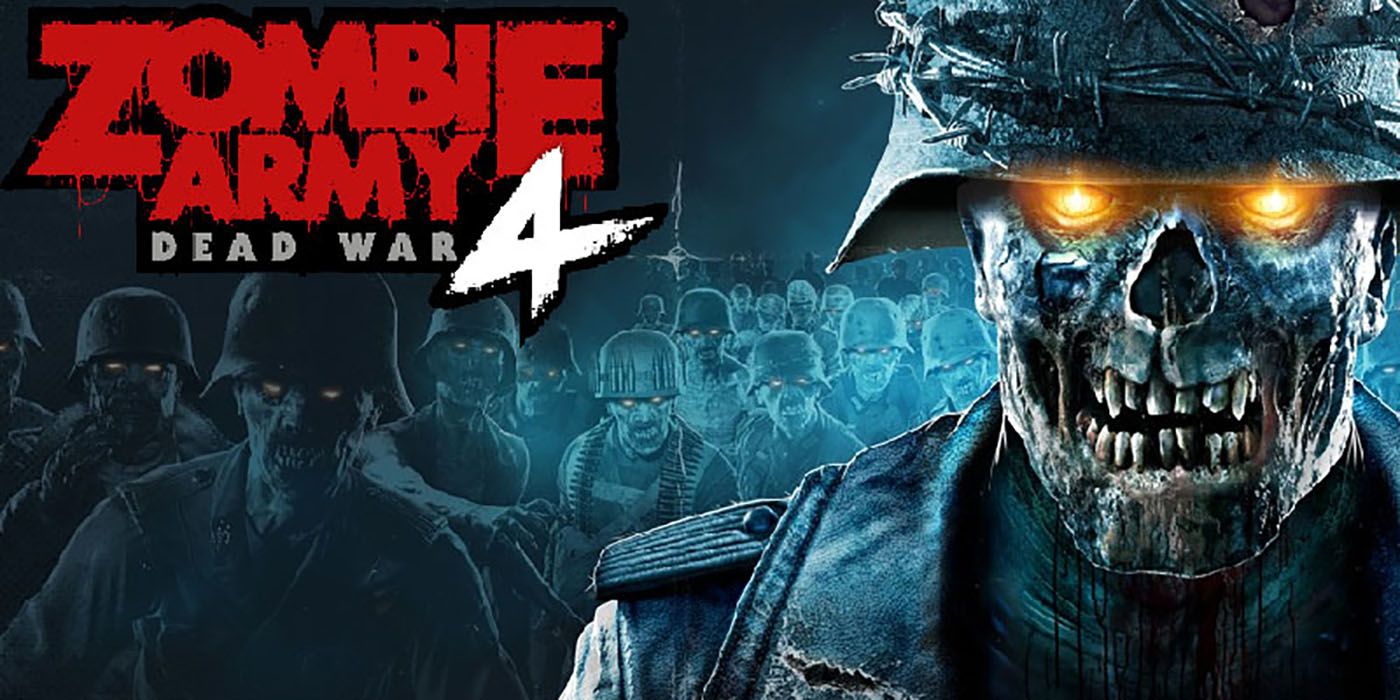 Nazi zombies is an admittedly trite trope in horror gaming. Other than Call of Duty: World at War’s zombie mode and the Wolfenstein series, what else of worth has this cliché offered? Well, I can thankfully confirm that Zombie Army 4: Dear War provides a bloody good time featuring the fascist undead. The game revels in mindless but approachable mayhem, allowing any newcomer to lock, load, and fire away at brainless baddies. While the gameplay breaks little ground and the narrative is of seldom substance, you will get what is expected from this type of title. That expectation is a pure and unadulterated frenzy of blood and bullets.

Here is a brief recap. This series is set in an alternate version of World War II — the main difference being that Hitler executes “Plan Z” as a last resort after he learns of his defeat in 1945. After he gives the go-ahead, the fallen Wehrmacht rises. The undead army overwhelms the Allied forces, leading to the forming of a resistance. One squad of freedom fighters manage to defeat Hitler and send him to Hell. In Zombie Army 4, the titular Dead War wages on.

The plot is very straightforward. Rather than being bogged down by expanding upon its jejunity, the narrative is left by the wayside. In-level radio chatter and collectible documents are where you will find exposition and lore. Otherwise, this is an action game that knows what it is and decides to focus on the meat and bones of killing zombies. There are only but a few cutscenes that disrupt that focus. When a cutscene does play, a new enemy type or boss is introduced in a chilling way that gets your blood boiling.

Bring in the Calvary; Feel the Exp-induced Ecstasy

The story comprises of eight levels. These will take you across Italy – – placing you in iconic cities like Venice and Rome. Each chapter brings new enemy types, environments, and objectives. These elements keep the ten-hour campaign consistently fresh despite the lack of plot and occasionally repetitive objective routines.

Pre-game menus, and starting safe rooms akin to Left 4 Dead, are where your loadout is customized. Everything, from weapon selection and modifications to perks, is chosen here. There is a small but substantial selection of weapons that should fit most playstyles, be-it the headstrong shotgun approach, or a methodical sniper type. A mix of roles is congenial for the fantastic four-player co-op, especially when playing on hard difficulty.

The gist of the gameplay lies within building up a combo multiplier. Each time you mow down an undead fiend, the exp multiplier increases. Performing headshots, using the environment, or eliminating difficult enemies will net more points. All of your efforts contribute to an overall rank. A new perk, mod, cosmetic, or weapon upgrade unlocks with each promotion. It is all so satisfying.

Loadouts also include executions as well as special focus finishers for guns. These abilities are powered up with kills and have cool-down rates. Those up-close-and-personal abilities come in two forms: melee attacks and takedowns. The melee moves range from a devastating machete slash to a stunning punch with an electrified knuckleduster. Lattermost, takedowns are self-explanatory — and they restore health. Gun finishers, on the other hand, are in a totally different ballpark. You could be activating bullet time with a full-auto or locking onto multiple targets with a pistol. These abilities all add spice to the endless decimation.

Four playable characters are available to pick. There is Karl, Boris, Jun, and Shola. They all have their individual strengths and weaknesses. For example, Shola’s weapon focus requires fewer kills to charge. However, she takes more damage from gun-wielding enemies. In terms of personality, the cast does not stand out from zombie slayers of the past. It also sucks that there is not a lot of chatter between characters when playing co-op, unlike the memorable quips exchanged in something like Left for Dead.

The co-op staple that is horde mode is available to play across four maps. You start off with a pistol and advance through small locales. Hidden areas of larger size open up at certain waves, giving you a chance to find new weapons and items. However, this means a huger and harder onslaught. At the final wave, thirteen, you can turn stay and fight until you die or want to escape. These additions are excellent, setting this horde mode apart because there is an element of risk-taking that increases the tension.

The direction Rebellion headed towards the establishing of tone is memorable. There is geniality to the gore. Spacey synth and pinball sounds can be heard when merely picking up a grenade or leveling up. A score inspired by the minimalist synth of John Carpenter and the progressive rock of Goblin reverberates throughout. All-in-all, what could have easily been a generically gritty game turned out to have a quirky and well-realized mood.

The Extras: Collectibles and Photo Mode

Chapters drop you in open-ended areas like warren city streets and complex undergrounds. If you head off the beaten path, a manifold of secrets awaits discovery. There are comics to collect, documents to read, and even zombie hands (Nadja) to shoot. They all have their own branching strand for completion. Easter eggs are also scattered around the place that will provide both amusement and horror. All of these goodies are perfect for replayability. And, hey, they grant sweet helpings of exp!

As I played cooperatively, I acted as the cameraman while the rest of the group did all the work. The Photo Mode provided is one of the best in recent memory. Tons of filters are available to capture the game’s late 70s/80s horror feel. If you are into in-game photography, you will be hard-pressed to find many recent offerings of this caliber.

Developer Rebellion brought us the Sniper Elite franchise. Zombie Army is a spin-off of the series and uses the same engine. The primary weapon in every loadout is a sniper rifle. Unfortunately, I am not convinced that the predecessor’s, as mentioned above, sniping translates well to a game with an enormous swarm of enemies to deal with. The inability to remove the rifle entirely is a neglectful decision when it comes down to people who are used to the arsenal they are familiar with. I, for one, hate using these weapons, so it is a pain to switch to them after ammo for my Thompson runs out.

Another flaw carried over from Rebellion’s flagship franchise is the camera. A third-person perspective is presented with a wide peripheral. This is good for spatial awareness since not many zombies can get the jump on you. However, navigating enclosed areas is troublesome because of this broad POV. The environment occasionally obstructs the camera, which can be frustrating when baddies are starting to pick away at your barely regenerative health.

Not a Dead Beat

Zombie Army 4: Dead War lets you take the fight to a familiar foe in an expected but fun way. Cooperative play is a joy, gunplay is frantically exciting, and the progression system firmly holds everything together. While not reinventing much, Zombie Army 4: Dead War greases the bloody wheels of the zombie trope by implementing its own solid trademark of tactical shooter sensibilities.