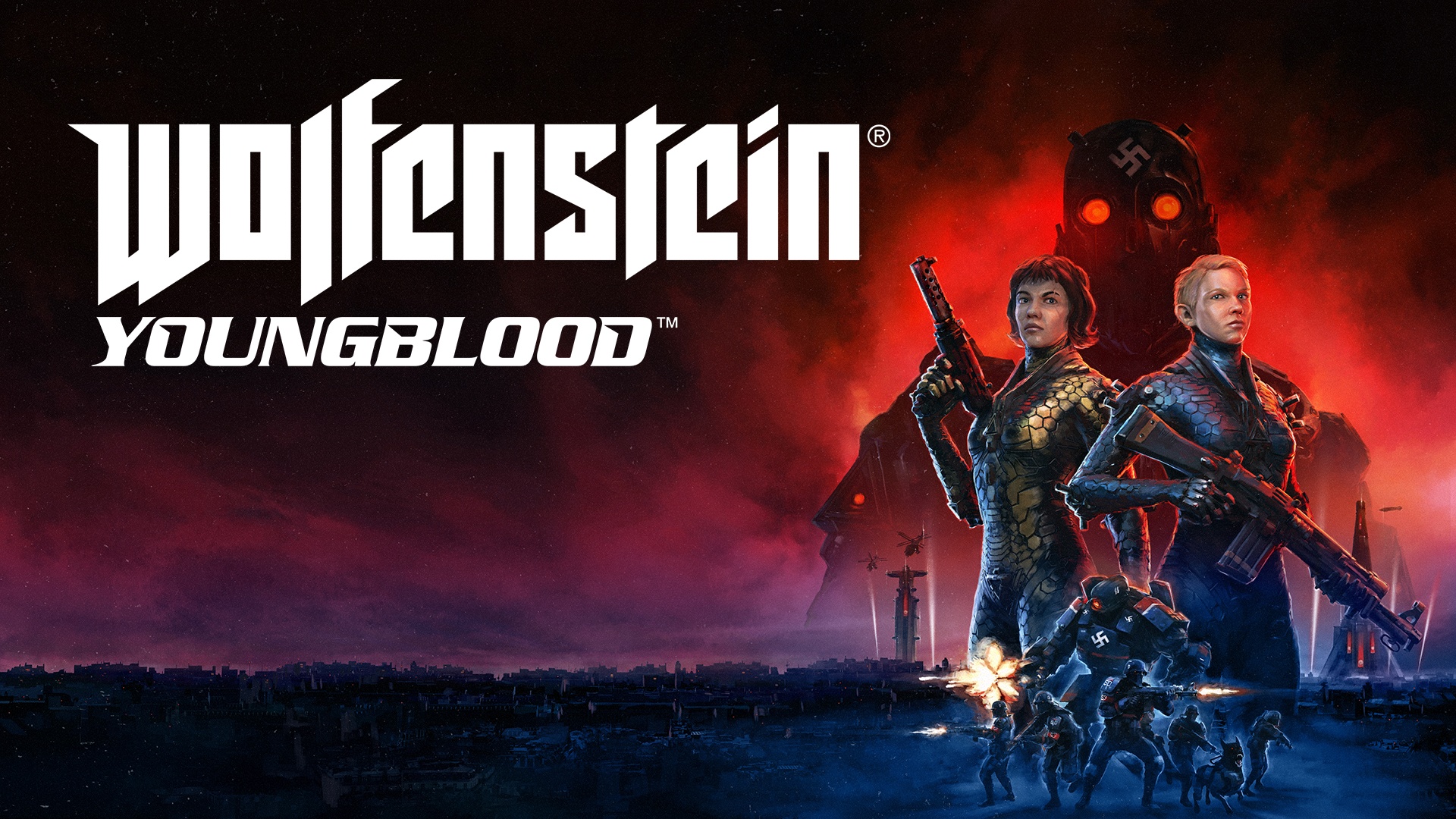 Ever since World War II, killing Nazis has been as American as baseball and apple pie. It makes sense, then, that it would also become a favorite pastime of gamers everywhere. Wolfenstein 3D, one of the seminal first person shooters released in the early 90s, first introduced us to the visceral pleasures of exterminating large swaths of Nazis and, while the series has most certainly had its ups and downs in the subsequent 27 years, these days Wolfenstein is better than ever. When MachineGames first took over development of the franchise with 2014’s Wolfenstein: The New Order, they struck out in a new direction that reveled in the absurdities of the overall premise regarding Nazis taking over the world with magical technology, while also adding new, incisive, relevant commentary on the state of modern affairs. Always at the forefront, however, was the emphasis on fast, kinetic and brutal gunplay. While content to stick to that formula with their follow-up expansion The New Blood, and eventual sequel The New Colossus, this year’s installment, Wolfenstein: Youngblood, sought to break new ground and take the franchise to interesting new places. The results of this effort are proving divisive among longtime fans, but one thing is for certain – Youngblood is a bold evolution of the classic Wolfenstein formula that somehow manages to retain the core of what makes the franchise so popular, even if MachineGames and Arkane couldn’t quite stick the landing.

Youngblood picks up the rebooted franchise’s story approximately 18 years after the events of The New Colossus. BJ and Anya’s twin daughters, Soph and Jess, are now all grown up, educated in the art of war by their parents. When BJ inexplicably goes missing one day the sisters, along with Sister Grace’s techno-whiz daughter Abby, depart for Paris in an attempt to locate him. Armed with their own personal power suits, they join the heart of the French Resistance. It’s a simple setup, but it effectively sets the stage for a new quasi-open world gameplay experience that has the twins traipsing through the streets of Nazi-occupied Neu Paris, racking up body counts to rival their legendary father’s.

It’s always risky when a franchise suddenly swaps out a classic, iconic character in favor of complete unknowns, but Soph and Jess quickly make it clear they are The Daughters of Blazkowicz in every possible way, right down to that lovable, no-nonsense-but-kinda-meatheaded worldview that Terror Billy has always been known for. Quirky, goofy and often incredibly juvenile, these sisters and their relationship is one of the highlights of the game. The chemistry between Soph and Jess is wonderful, and rightfully gets a lot of attention as the two get some on-the-job training in guerilla warfare, taking on multiple side missions revolving around rescuing vital allies and weakening enemy defenses; they’re badass, but they’re still green, though not for long.

SISTERS ARE DOIN’ IT FOR THEMSELVES

After a few brief cutscenes, players will find themselves in the French Underground, which serves as a hub from which all missions are selected and undertaken. As in previous games, players take on missions offered by the various crew that populates the hub, with one key difference – the vast majority of missions in Youngblood really are side content, not directly related to the story. While there is always some story-based reason for where you’re going and what you’re doing, they’re mostly threadbare plot points that don’t offer much narrative heft at all. After the first major story mission, you’ll spend most of your time working the simple gameplay loop (take mission, kill lots of Nazis, level up, return home and collect your reward).

While I personally enjoyed the freeform nature of these not-quite-side quests, they’re definitely going to rankle a lot of longtime fans who play these games as much for the story and characters as they do the gunplay. You should expect several hours’ worth of gameplay devoted solely to these mini missions and the overall objective of simply leveling up enough to take on the much larger, raid-level missions near the end.

Another drastic departure for the series is Youngblood’s near-sole focus on cooperative play. While it’s possible to play through the entire game solo with an AI partner, this expansion shooter is at its best when you have a buddy along for the ride. This is in part thanks to the fact that there aren’t any real leaps in AI ally technology in this game; for the most part, your AI sister is going to be about as useful as the average Marine in a Halo game (read: not at all). Depending on what difficulty you play at, they can even become a liability. The new Wolfenstein games have always prided themselves on being aggressively challenging, and Youngblood is no exception, but the reliance on AI (or random) teammates can get quite frustrating unless you’re willing to lower the difficulty a notch or two, as I eventually did.

This issue is exacerbated by the fact that you and your partner, whether they’re AI or being controlled by another player, have a pool of shared lives to draw from (maximum of 3). If either you or your teammate are knocked down and bleed out before being revived, one of those lives is lost. Lose them all, and it’s mission over. No checkpoints, no quick saves. You will start the mission over from the very beginning. Given that later missions can often take 45 minutes or longer, depending on difficulty, the shared lives pool is more often than not a frustrating mechanic rather than the intended incentive to actually cooperate with other players. This could have easily been mitigated by dropping the shared lives mechanic for solo play, and hopefully that’s part of an upcoming patch, because the game seriously needs it. The fact that you also cannot actually pause the game anywhere, at any time, is just salt in the wound. Have to take a phone call or make your kid a snack? Better find a spot off the beaten path and hope you get back to your game before more Nazis spawn into the play area.

However, if you can overcome those obstacles, there’s actually a lot to like about Youngblood. The gunplay is as good, or better, than it’s ever been; battles play out at a breakneck pace and you’re given an impressive arsenal of weapons to choose from. The new enemy armor system ensures that you use everything you’ve got, by requiring you to match your ballistics to one of the two types of armor the enemy has equipped. Shooting at an armored enemy with the wrong weapon is about as effective as throwing wet Kleenex at them, but the right weapon will melt through armor in the blink of an eye.

The new level up system is also a welcome addition, as it both coalesces and refines various systems from previous games. It’s a typical RPG-lite setup; every time you gain a level, you gain an ability point. Invest in the abilities you want, ignore the ones you don’t care about, and create a custom skillset for your character. I found abilities like Crush (which turns you into a power-armored wrecking ball that can blast through doors, crates or even armored enemies) among the most useful, while the cloaking ability went mostly unused. Certain special abilities unlock later in the game that can completely change how you approach endgame content, keeping things fresh and fun for far longer than they should be.

You can also still upgrade weapons using silver you find throughout the game world (or real world money if you’re really impatient), but the system is more robust and offers upgrade combos that can enhance damage output, handling or accuracy. Match enough similar upgrade types on the same weapon and gain a bonus boost to that particular stat.

The most important addition to Youngblood, however, is the Pep System. Each sister can equip a Pep that, when used, offers a variety of beneficial effects for you and your teammate. You’ll start with the basic health boost pep, which just gives you and your sister an immediate +50 health. You can spend silver to unlock more useful, and powerful, peps and even equip different ones to you and your (AI) sister; by the end of the game, I was combining a full health pep and a full armor pep that let me plow through latter levels with far greater ease than earlier in the game. It’s a bit unbalanced, but it’s also fun as hell.

THE ONLY GOOD NAZI…

Whether or not you enjoy Wolfenstein: Youngblood is going to depend on a lot of factors. If you loved the previous games for their narrative depth, linear story, and simplified gameplay, this might be a tough sell for you. Youngblood is still fundamentally Wolfenstein in almost every way that matters but, like its rookie heroines, it’s a little unpolished and rough around the edges. If you’re looking for something new, innovative, and daring, and can overlook a few flaws (some more glaring than others) then it’s time to suit up, gear up, and once again prove that the only good Nazi is a dead one.