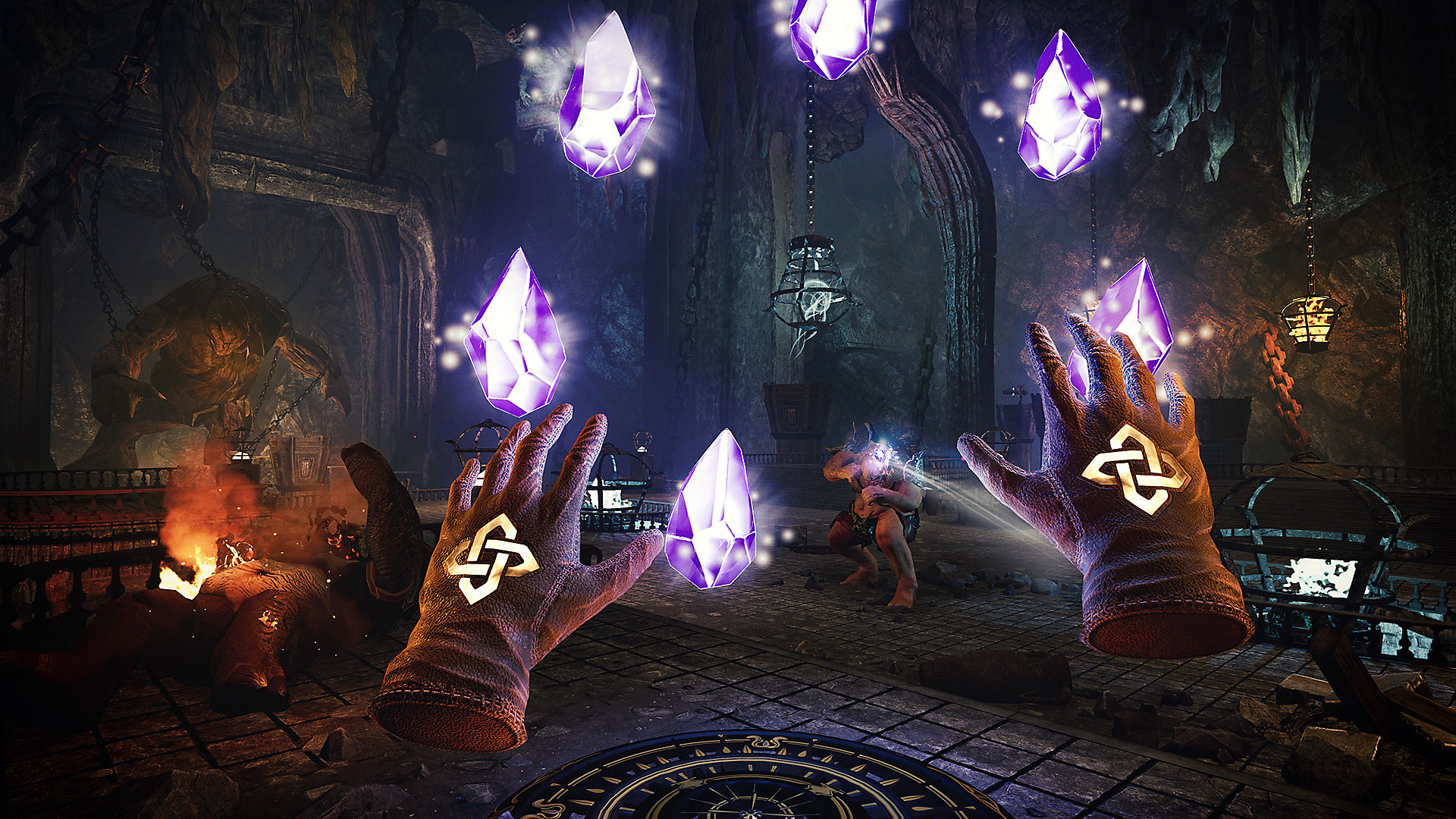 If you ever wanted to be a wizard and cast spells, with actual gestures, then you may want to check this out. To put it simply, The Wizards makes you feel like a wizard. It’s accessible enough to get into quickly but also has enough depth to keep you playing through its 5 to 6 hour campaign. And it’s built for VR which makes it work well for the most part. This is one of the better PSVR games you can pick up but it’s not without its shortcomings. The gameplay, while fun, gets old fairly quick. And after a while, the novelty tends to wear off. Even so, I enjoyed my time playing through The Wizards.

Right away, you’re plopped in the middle of the action, tasked with fending off an invasion of goblins and orcs across time and space. The story isn’t the strong suit of The Wizards but that’s okay. We’re here to cast spells and kill goblins. You quickly learn the fireball spell to do just that. Hold your move controller out (you can pick a dominant hand by the way) and make a fist with the trigger button. Then make a twisting gesture and, poof, there’s a fireball in your hand. Now you can throw it at whatever you desire using your head to aim (includes a soft lock-on for enemies and other objects).

This gesture system is where this game shines. Further into the game you’ll learn a shield spell which is summoned by using your off hand move controller to motion across to the opposite side, creating a magical shield that allows you to block attacks. Another has you bring your hands together in a half circle motion to summon an ice bow that you can shoot at enemies. And what is probably everyone’s favorite is the lightning spell which you summon by bringing your hands together in front of you and pushing them forward. It charges your hands that, when released, shoot out bolts of electricity that is extremely satisfying.

The spells are what this game does best. They are simple and intuitive enough to remember them easily. Which is great when you’re in the middle of a chaotic battle. The spells are all different enough to keep it interesting as well. But this is also where one of the downsides to this game appears. While the premise is great at first, it doesn’t take long to learn all the spells. It didn’t seem like I was very far in before I learned the last spell. I wished there could have been more spells to learn through the rest of the game.

Swish and Flick! Or not…

For the most part, the spells work great. Except when trying to throw things. It may just be me, but I’ve had some bad luck with throwing in PSVR. This game was no different. There were times when I would try to chuck a fireball only for it to veer off in a different direction then I was aiming for. Or the fireball would pop out of my hand and explode behind me. One of the last spells allows you to summon a bigger, explosive fireball using both hands. Which could be great but no matter how much I tried, throwing almost always failed and I hardly used that particular spell because of it.

You move your character with a combination of the two types of movement typical to VR games. One controller is used for smooth movement (push the button to walk forward) and the other one for teleportation (hold the button and aim at where you want to go). It’s a nice way to combine the two movement types without having to enter a menu to switch back and forth. Plus, it’s not just a matter of comfort. There are times when you do have to teleport to reach higher areas or areas that are far away. But for the most part you can pick which works best for you and stick with that the whole game. Plus teleportation is actually canon so that works well here. And there are options within the menus to adjust to your comfort level.

Which brings me to the concept of battles. Battles can get pretty chaotic, with enemies coming from all sides and others firing at you from afar. Later you’ll have to switch different magic types which adds even more of a challenge. While the battles start out easy (throw some fireballs and you’re good), it doesn’t take long for them to become a challenge. These are not anything to shake a stick at. This PSVR game takes itself quite seriously.

I never felt like I was being cheated by the format either. Once I got the hang of moving around and using my spells wisely I got better at these challenges. I’m not going to lie, I died quite a few times throughout my adventure. But I was always able to come back at it with newfound knowledge and eventually defeat it. Boss fights also changes things up a bit as well, making you multitask by making use of your environment and firing back when you get the chance. While it still doesn’t quite stand up to standards of normal games, the battle is more of a challenge then you might expect from a VR game.

In fact, this game is actually quite meaty for a VR game. The campaign takes about 5 or 6 hours to get through, depending on if you try to collect everything. The story, while not amazing, is presented quite well. And the battles can be very challenging. Overall, it’s an impressive package.

Another minus for The Wizards is the flow of the game. Battles take place in scripted areas. All exits are sealed off and you have to survive a wave of enemies. And while some areas do shake things up a bit, it seems like there is a bit of a limited scope to the potential that this game could be. I get that it’s catering to the platform but I don’t see why you couldn’t fight enemies as they came instead of playing scripted waves over and over. You’ll explore, fight a wave, explore, solve a puzzle, fight a wave, explore, fight a boss. Rinse and repeat. It works but I think the game would be better with a more organic battles.

Reach For The High Scores

It’s worth mentioning that there isn’t a multiplayer aspect to The Wizards. Which is pretty unfortunate because I think either versus or co-op would be pretty fun in this game. But you can connect online and compare scores for each level to other people. The game does not make it very clear how you get points though. I was never sure if it was by accuracy, time, or a number of other factors. So I never really figured what to do to make the score higher. Of course, chasing high scores has never been a thing of mine but I think the game could have explained it a little better.

There is one obvious way to change your end score however. And that is by using tarot cards which can be found hidden throughout the levels. These cards, which are placed before you start the level, can have different effects on the game. For example, one slows down the enemy. While another gives them more HP. This gives you a way to change up the game a little bit and also changes how your points are gathered. In this case, cards tell you clearly how they will affect your game and points.

You also earn gems both from your high scores and other more secret means (like pulling off a fancy move with a spell). These gems can then be used to upgrade your spells in various ways. For example, an upgrade to your fireball can create splash damage so that it takes out their buddies as well. The game doesn’t really teach you how this all works though and, frankly, it’s a bit obtuse and hard to figure out but not impossible. Once you get the hang of it, it does give you a little more variety to the spells you have.

There are two portions to the game, Story Mode (which is what I mostly played) and Arena Mode. This mode contains three maps. One has you protecting a tower, another has you defending gemstones from enemies, and lastly, a map has you looking for gemstones to destroy. These maps, while an interesting idea, tend to get bogged down by the amount of on screen enemies. At the end of the day it just feels like the battling portions of Story Mode without any exploration in between. Definitely not a strong point for The Wizards.

Seeing as the game is tailor made for VR, it actually looks really good in the headset. This world is colorful and interesting to look at. In fact, I was reminded of my times scoping out the scenery in Skyrim. It pays to take a minute and look around. There is a variety of environments to explore including ruins, dungeons, and even a desert. It all looks really good and I didn’t really have any issues seeing anything in the headset.

Animations of enemies are a little iffy at times though. They look okay until there are a lot of enemies on the screen at once. Then the frame rates of the enemies take a dip. Mind you, I’m not talking the frame rate of the game itself, just the enemies. As well as your spell animations. The game works but it was a little distracting to watch a troll fall over in what looked like slow motion because a choppy frame rate.

VR games are growing and starting to get better as time goes and developers try new things with the format. The Wizards is a step in the right direction. Casting spells is a blast and very intuitive. While the game does have some of the shortcomings that plague most VR games, this one makes up for it with the fact that you get to play as a wizard. The game is pretty meaty and has plenty for you to do. It looks pretty good too, minus a few less than ideal animations. Unfortunately The Wizards falls a bit short of being amazing. A shallow gameplay loop and content that grows stale after a while. I learned all the spells very quickly and I found myself wanting a little more by the end of the game. This time, not in a good way. Despite all that, I still enjoyed my time with The Wizards. It really is a lot of fun. I’m just not sure when or if I’ll get back to it.

P.S. It’s worth noting that this review is for the retail copy of The Wizards. Not only does it include a physical copy of the game but it also offers some digital goodies that you can download. Including plans for a 3D print of one of the creatures.