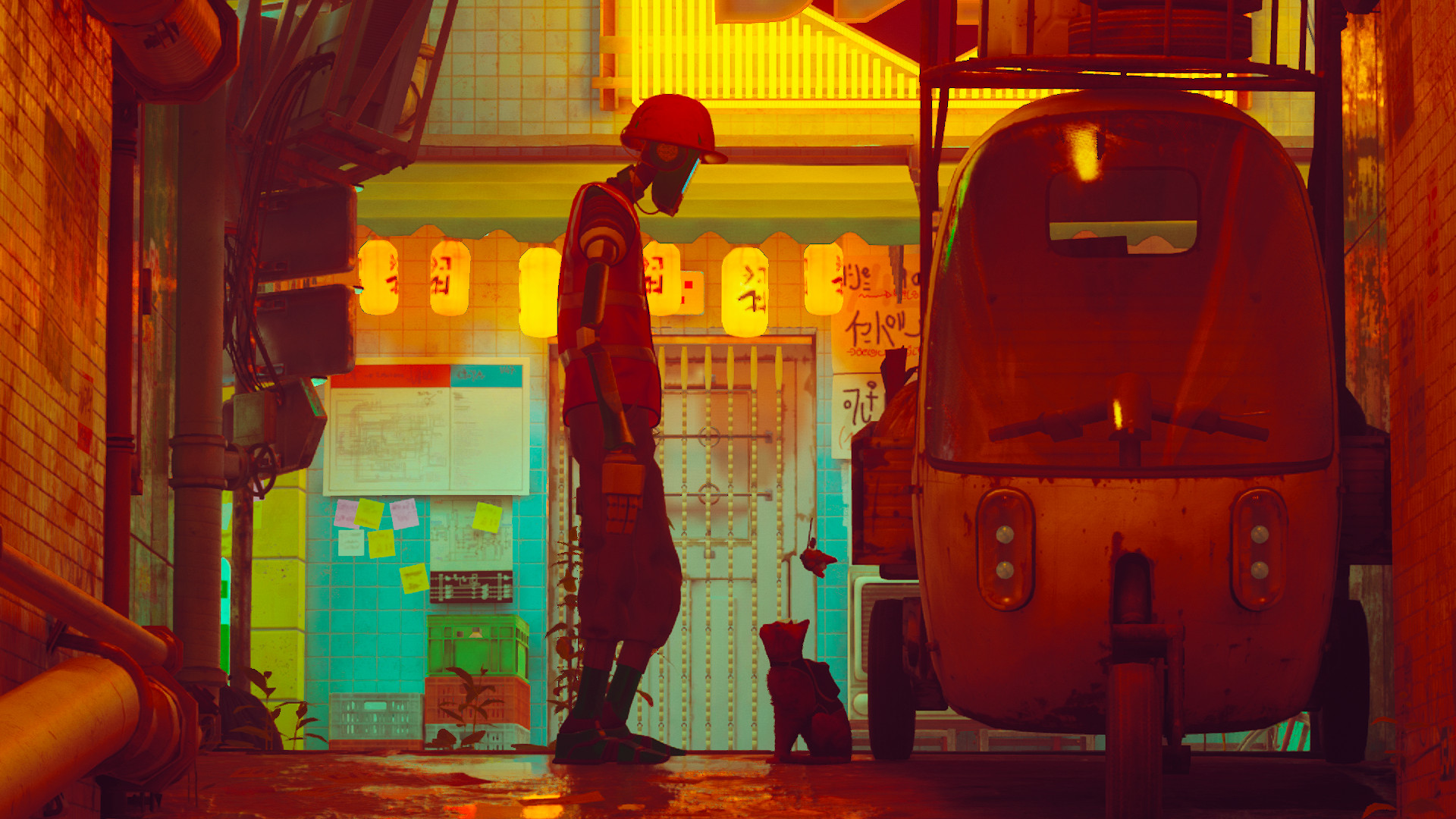 When it comes to budget titles, there is often a sense of dread amongst gamers. Often, they are short experiences clumsily stitched together in an attempt to get into the hands of people wanting to buy a game at a discount. With Stray, not only have BlueTwelve Studio shattered that stereotype, but they’ve also created an experience that can rival most full-priced triple-A games.

Games about cute animals tend to go one way or another. You either have the cuteness factor be the main selling point and the story and gameplay are an afterthought, or make the animals anthropomorphic and have them fight against an evil entity by acquiring super powers. I’ve yet to play a game where you play as a normal animal the entire game, that respects and feels rewarding to play through. With Stray I felt compelled to help those in need and complete every side quest. An accomplishment I never thought I would consider in a game like this

IT’S A CAT PLATFORMER — A CATFORMER

Our nameless protagonist — a stray cat — travels the beautiful landscape of a futuristic world with its family. You spend the first 30 minutes of this game understanding the basics, Clawing on things to mark your territory, jumping across pipes, and meowing to get others attention. It isn’t long, however, until our fellow feline companions get separated from you, and you must go on a life-changing adventure that will take you from the slums of an old robot civilization and back to the outside world.

I HARDLY MEW THEM

As you progress through this world, you will come across an ally, a robot who will assist you by any means necessary.
B12 — or, as I call him, a Swiss army bot — helps you whenever you are in a pinch.

He can translate the robot’s langue for you so you can better communicate with them. He can override specific computer terminals for you, allowing you to get to places you usually couldn’t.

Later in the game, you will acquire an offensive capability in the form of a light that implodes enemy Zerks. He can shine this light for you wherever you tell him to.

You can assist him as well by finding memories hidden throughout the game. These memories will help him to uncover his past and shed light on what happened to the world around him before you reactivated him.

The game has references sprinkled inside for those patient enough to look around.

The game is bursting with visuals and design choices that made me want to explore every nook and cranny of where I was.
The incredible visual variety in each chapter makes it feel like this is a lived-in world with characters you want to see succeed.

While you would think the novelty of playing as a cat would run its course after a few hours, how it can interact with the environment and NPCs made me feel as though being a cat in this world was the only way to help those who needed me. Being able to get across balconies and tight areas stealthfully never grew old, as there was a genuine sense of thrill and discovery wherever I went.

Though some might argue that the platforming is too easy as all you do is push one button to climb onto and off something, as a hybrid platformer-point-and-click adventure game, it never felt as though it was insulting my skill.

The music is also noteworthy. In every scenario I was in, the music added to it masterfully. From tense ambient beats during a chase sequence to a euphoric soundtrack during uplifting moments to the cyberpunk-ish street bob, this is some of the best use of music I’ve heard in a long time.

I’m astounded by how the developers were able to take such a simple concept and spruce it up to make it an emotional train ride that had me yearning to learn more about this world.

By taking the best element of games such as Enslaved Odyssey To The West, Journey, or any of the plethora of cyberpunk games you can think of and mixing them all, BlueTwelve has crafted a truly unique masterpiece worth your time and then some. With a lovable story populated by a colorful environment and characters all tailored to bringing this world to life. A fantastic means of traversal that encourages exploration and a somber tone that kept me engaged throughout my 12-hour journey, never waning my curiosity, Stray is one experience I cannot recommend enough. BlueTwelve Studio — welcome to the big time.

You can purchase Stray on PSN here.