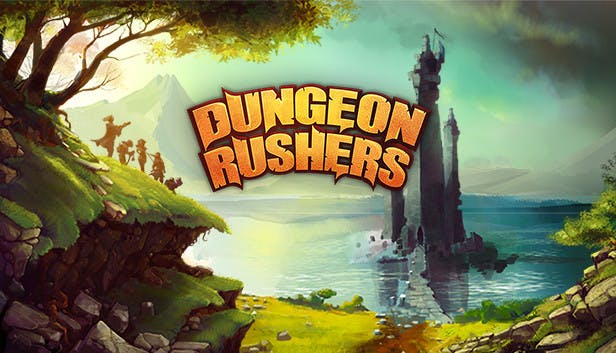 Dungeon Rushers is a 2016, turn-based combat, RPG game from Goblinz studio. Originally released on Steam Early Access and mobile, it has now made its way onto consoles. Dungeon Rushers is an enjoyable game with a lot of really great humor but suffers from a lot of grinding of earlier levels to progress into the later ones. It’s most fun when playing in small doses, making it feel much more suitable to mobile than on console.

Players start out with the main character named Elain, a kid with ambitions but his current employer doesn’t believe he’ll amount to much. He decides he wants to become an explorer and rushes out into the dungeons in search of fame and glory and more importantly, to prove his boss wrong.

Along the way he’ll meet up with an eclectic band of characters, 10 in all, with a party of 5 going into battle together at any one time. Combat is turned based and before going into a dungeon you can see the enemies you’re going up against and what their strengths and weakness are. The combat will be very familiar to anyone who’s played a turn-based style RPG. You can use close combat, ranged attacks, area of effect attacks, use health or mana potions, and change characters positions. A small gripe I did have during combat was when selecting which attack I was going to use, a large black box with the description of the attack would appear on the screen taking up screen real estate. This made it difficult to see which enemy I was selecting to attack. Not game breaking but a little annoying.

Traversing the dungeons involves a top down map made up of squares. The dungeon is procedurally generated. You’ll move in one of four directions, running into traps, events, or rooms with enemies until you make it to the treasure room.  You can choose to keep exploring the map if you still have some areas to reveal. By completing all challenges on the map you gain gems so you can replay the Heroic version.

If you press L1 on the controller when moving around the map, you can view different character abilities. One ability can help you avoid traps by revealing two squares in each direction of the current location. If you do land on a trap, depending on the members of the team you’re rolling with, you’ll be given the option to disarm the trap or one of your team takes some damage.

Each member of the party has his or her own skill trees to add ‘Talent’ points to. For example, Elain can put points into his Swordsman, Archer, and Ranger skill trees. Odessa can put points into Warrior, Bulwark, and Amazon Queen. With each different character having their own attributes you won’t be short of options for building a strong and diverse team. Weapons can be buffed and the game also has a crafting element.  You can make better gear from resources found on your journey. You can also buy and sell items in the shop.

Where the problem lies is that it takes a lot of time to gain Talent points and in later levels, as the difficulty starts to ramp up, you’ll find yourself going back over earlier levels multiple times and that’s were the grind comes in. This wouldn’t be so bad except that after a few short hours repetition kicks in. If I was playing this on mobile on short journeys, I wouldn’t mind it so much, but I struggled to play for longer sessions on console. I felt like I’d seen everything in the first couple of hours of play, after which the game started to just rinse and repeat.

Which is a shame because when I did play I found the dialogue to be really entertaining. It got a genuine laugh out of me when I walked into a dungeon and the skeletons told me to just move on. They just wanted to be left alone to RIP, all before I initiated a fight with them.

For the most part, I really did enjoy my time in Dungeon Rushers. The game is funny, has solid combat, a crafting system, and fully customizable skill tree for the whole party. If you’re looking for something you can just jump in and out of, it’s certainly not a bad game and it’s at its best in bite sized gaming.