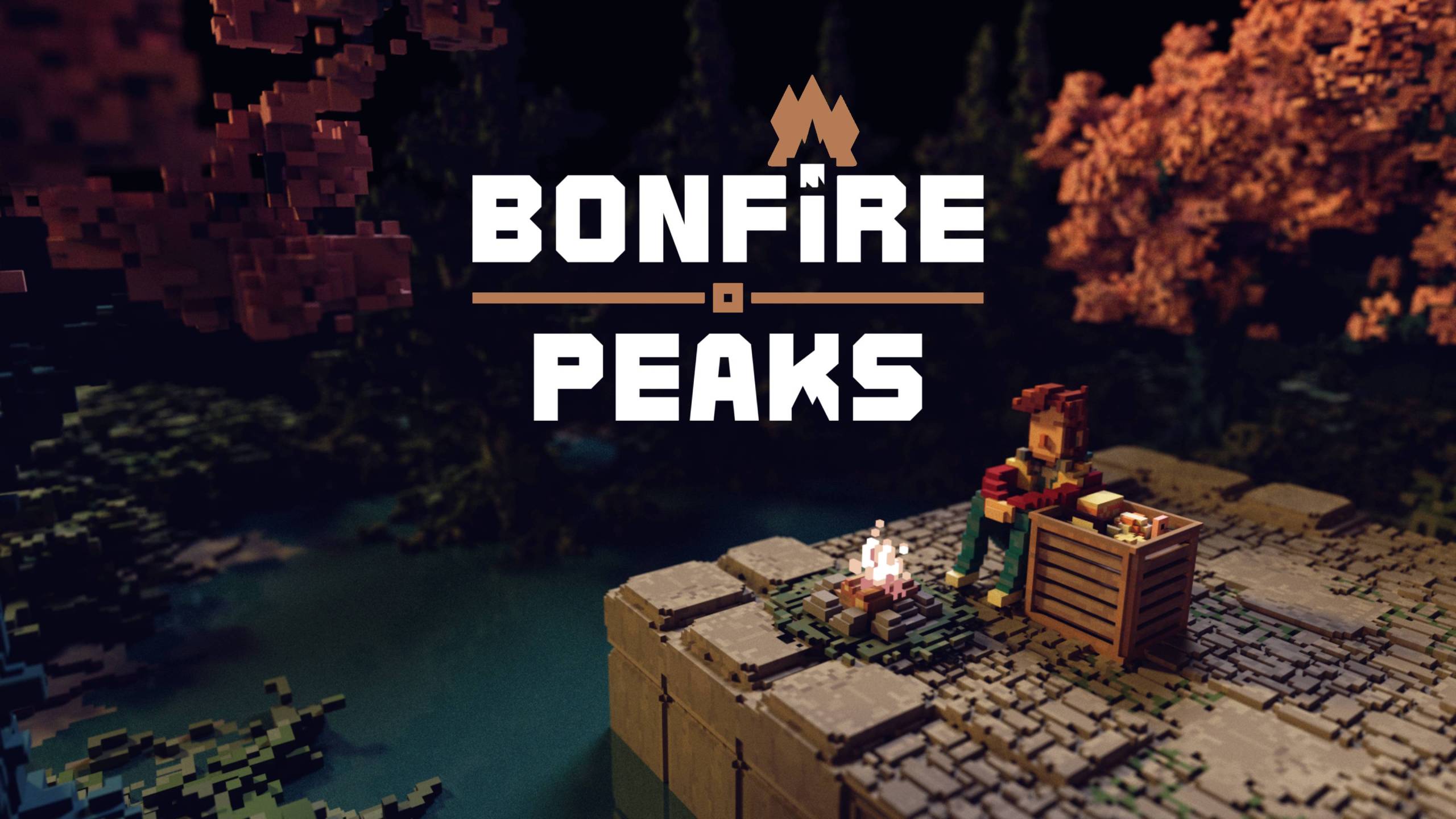 It can be tough to tackle themes in something as gamey as the puzzle genre. Yet, here we have a level-based, isometric puzzler that presents the act of a man’s closure, the embrace & abandonment of an unpleasant past. Although the actual puzzling can be routine, strong imagery and a blissful soundtrack help elevate the game to be a genuinely great indie.

Bonfire Peaks opens with a shot of a nameless man. He is on a swan pedal boat, eventually stepping foot on a secluded, mountainous area. The game establishes its cinematic flair from the get-go, boasting black bars like a film and using a shaky zoom-in as if there were a cinematographer filming. This style extends less in its presentation, as the game is played isometrically, although you can still act as a cameraman by zooming in and out.

What’s your goal? To burn your belongings of the past and reach the summit of the mountain. Everything is conveyed silently, meaning you won’t read or hear a single piece of dialogue. There is an equally understated but present sense of progression, as you start out in an overworld (or hub, if you will.) From here, you access levels by interacting with bonfires. It’s a clever type of presentation because it feels like you are exploring the character’s mind, but more on that later…

The end goal for every level is to reach a fire pit and burn a box of belongings. You do this by grabbing, maneuvering, and placing stuff in certain spots. Besides the main compartment, there will also be crates you can pick up and build platforms with, alongside many other permutations. The game is grid-based and doesn’t implement much physics-based puzzling, which means you will need to precisely put yourself and the objects in specific tiles. As the game progresses, there are different hindrances thrown in, such as arrows and spikes too. There is also a handy undo system that reverses a single tile movement or interaction at a whim. You can also restart a level at any point.

Is it fun? Not particularly, because the puzzles can be infuriating. A significant factor in the frustration is the game’s reliance on rotation. It is a necessity to move backward and sideways with a box in hand. However, there are often things in your way, and the game’s grid format can make things feel somewhat obtuse (you can’t rotate the screen 360 degrees.) I appreciate the more complex mechanics like burning crates to make fragile platforms and sticking into wall spikes to build a tower, but it can get quite samey. All you’re doing is just moving a bunch of generic crates around, which is bland for a game so conceptually interesting.

Ugh, can’t I chop these sticks down?

Keep a Little Fire Burning; However Small, However Hidden

Each time you complete a level, you will be back in the overworld with a reward: a new crate. You can use this familiar object to reach a new height, where more levels await. Each locale requires only 2-3 stages to finish, which is ideal for people whose interest lies solely in the story, such as me. As you climb the summit, you will come across mementos of the protagonist’s past. There are specific yet quotidian objects, such as a piano and a car. Since the main character has no backstory, you can project your own personal experiences onto these mementos. Effectively then, what was once was ordinary and never given a second thought in our lives is presented with a spotlight in this game.

You’ll come across more things that will spark something nestled deep within your memory. An old TV set, a set of Sesame Street toys; the small moments of life you take for granted will reappear at first in a flash and then with reflection. Then there are hints of why the protagonist would want to burn everything away. For example, a hospital bed appears, as well as objects owned by people only named in the trophy list (IE, ‘Zach’s saxophone.’). It’s a deeply personal experience to both speculate about the protagonist’s tragedy and to connect the mementos that represent the cherished and the painful memories to your own life.

Fire, Walk With me

Not only is Bonfire Peaks an emotional experience, but it is also a pleasant experience visually. The voxel pixel art is reminiscent of Minecraft, and the overworld’s forestland and caves look quaint. There are also more unique sights when you play the puzzles, such as an ancient Greek-like temple in the background of one area and cherry blossoms in another. While I can’t begin to analyze what these elements could mean thematically, I know that this game has a look that makes me feel cozy.

One of, if not my favorite part of the game, is the score. Corey Martin is not only talented enough to be a designer, but he’s the composer too. The music truly cements the game’s themes in a way that gives you chills. It can make you feel comfortable and melancholic, with its ambient undertones and lush guitar/bass tremolo (pretty much the Twin Peaks theme sound.) Paralleling the protagonist and his desire to move on, the songs’ notes at once echo and then fade like a dying fire.

A Flicker in the Dark

While the puzzling itself racks your brain adequately, if frustratingly, the real pull of Bonfire Peaks is its ability to make you feel personal nostalgia through mementos—the memories that shaped you, both happy and sad. Topping it off with pleasant voxel pixel art and a rousing soundtrack, the game offers a distinctly unique experience.

You can buy Bonfire Peaks on PSN here.