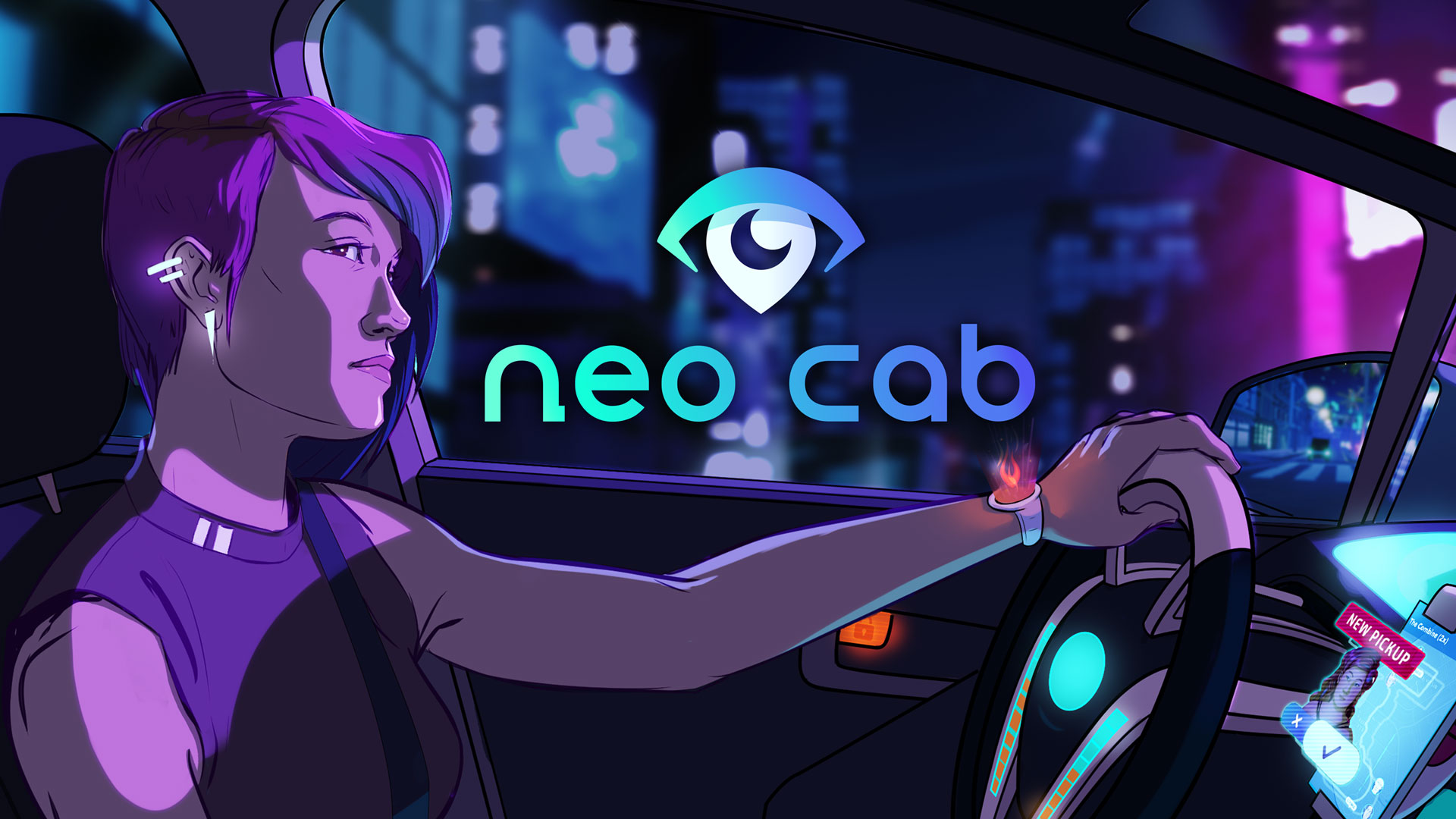 Ever since hearing of Neo Cab being referred to as “an emotional survival game,” I’ve felt incredibly drawn to it, as well as curious. As I dug more into it, before even starting up the game itself, I started getting the feeling that playing it would feel a little bit like a roller-coaster. Ends up, it really did. Chance Agency’s first game made me feel, first and foremost, like an actual person playing the game, a mind game. Neo Cab puts you in Lina’s shoes: one of the last human ride-sharing drivers out there, in a world where technology has almost completely taken over already. Imagining a world like this in our future everyday lives wasn’t too hard, and thanks to that, I started connecting emphatically with the people of the dystopian city of Los Ojos.

IN LOS OJOS EVERYTHING HAS EYES

Neo Cab’s strongest selling point is, without a doubt, the intricate puzzle of lives that makes the game feel almost alive. We follow Lina’s adventure as she ventures for the very first time to Automaton City, or rather, Los Ojos. She’s a Neo Cab driver, one of the last of them, since the job is slowly being taken over by AI-driven cars, belonging to the Capra company. One thing that is immediately made clear is that, in reality, Capra controls just about everything in the city, and even more frightening, they keep tabs on everyone. Thankfully Lina is not the biggest Capra fan. She has firm opinions on the matter and often finds herself in disagreement with the Pax that she picks up, those very same opinions can put her in stressful situations. Being opinionated would usually be a positive trait, but in a city where everyone is treading on thin ice, it suddenly becomes a curse. Even more so when the only people that can help her out are, in fact, her clients.

The gameplay in Neo Cab is relatively simple and straightforward. Then again, in a game like this, it really doesn’t need added complexity to it. From the moment we’re about to step in Los Ojos, the game introduces us to the Neo Cab app interface. From there, we’re able to interact with the clients’ icons all over the map. We can read more about them and their personalities. Even if their description is often composed of a few seemingly random words, they can be very telling of the client we’re checking out. Or not. Neo Cab had the tendency to surprise me whenever I got too comfortable thinking that I could handle a certain situation. Just like in real life, all it takes is one misplaced step, a wrong word, a sigh that was too loud, for a conversation to go horribly wrong.
Thankfully, soon after the first clash with a client, we get handed a Feelgrid. Another fancy technology piece belonging to Capra, but that, in this case, is handy to us. The Feelgrid works much like mood rings back in the day, but with added depth to it. Depending on our mood, the Feelgrid will pick up the changes and display it on the device through a color: yellow for happy and hyperactive; green standing for chill and relaxed; blue meaning sad and depressed; red indicating anger, fear, and disgust. Of course, the Feelgrid doesn’t merely change between four colors depending on our mood. There are actually 3 different levels of intensity. Starting from the center ring, emotions there are mild. We’re feeling something, but it can easily be ignored, for the better or the worst. The middle ring usually means something is genuinely getting to us. Anything after that are feelings referred to as “too intense,” and they can have harsh consequences on our mood.

The interesting thing about our Feelgrid is how the clients around us – and ourselves – interact with it. Our clients will often pay attention to our mood, especially if we’re in the blue or, even worse, the red. If something gets to us and the client notices they’ll usually react to it. Someone might tell us that they don’t want to talk anymore, someone might apologize for being too harsh and someone else might feel like they want to push all the buttons.
In our case, being able to keep an eye on the Feelgrid is a useful way to know whenever we can or cannot push a matter further than a certain limit. Being in a certain mood, in fact, influences the dialogue choices that we can make. If an argument got to us and we’re in the blue, we might, in fact, feel too drained to keep fighting back. A bad situation to find ourselves in because it makes us vulnerable to silly requests; like making a donation to the cops, giving money to a random stranger, or paying a 70 Coins fee that we really didn’t need to pay for.
Trying to keep ourselves out of trouble almost feels like a chore at times. We can’t afford not getting paid or losing stars rating on our Neo Cab profile – being under 4.0 stars can make you lose the job. Pretty strict. Personally, I found myself trying to stay out of major arguments for the whole duration of my first playthrough. Only when I started my second game, I went all in and gave some of the clients a piece of my mind. Maintaining my star rating was harder the second time around, but definitely more satisfying.
Money in Neo Cab isn’t vital. Sure, we need it to charge our car when we’re running low on battery. It’s required to find a place to sleep after shifts, but usually, nothing more than that, unless the cops decide to keep fining our poor Lina on the road.

LOOKING THROUGH A WINDOW

For almost the whole duration of the game, our scenery is limited to the inside of the car. Exception made for a few instances in which we step out – but even then, the background isn’t anything special. That said, I don’t think this is something that penalizes Neo Cab in any way. The way Neo Cab is built – around the idea of socializing and getting closer to clients – makes it meaningless to have a scenery all around us at any given moment. We’re cab drivers on a mission, not tourists enjoying ourselves. We don’t have time for sightseeing. Everything we need to be looking at can be found in the cab. Our own facial expressions, our Feelgrid’s feedback, the clients’ reactions, and their own Feelgrids.
The graphics, though limited by the lack of complex sceneries, still somehow shine through the whole duration of the game. The characters’ design is detailed, unique, fancy even, and each client we stumble upon truly feels like a totally different person, not just a copy-paste of a previous one. As for the background music, it feels atmospheric enough not to be boring on the ears after stumbling upon the same piece more than once in the span of 10-15 minutes.

Neo Cab really took me by surprise. By the time I ended the game, I was emotionally invested, so invested that eventually, Lina’s emotions matched my own most of the time. So invested that, more often than not, the dialogue options appearing on the screen represented perfectly what I would have wanted to say in that given situation. Neo Cab isn’t a long game per se, but it offers replayability throughout interactions that you will surely miss during your first playthrough. Considering how valuable and unique human interactions are in Neo Cab, it is definitely worth starting over more than a couple times. It’s a game that has depth, that offers a unique take on issues that touch our daily lives more closely than we would expect. It’s also a game made to make you think, it forces you to emphasize with the people around you, in order to survive. It is the perfect embodiment and representation of how life is built on an intricate web of social interactions and survival. Everything we choose to say or do has an impact on the lives of those around us, creating a meaningful and enriching experience. Neo Cab easily became a game that I feel like I have to recommend to every fan of story-rich titles.