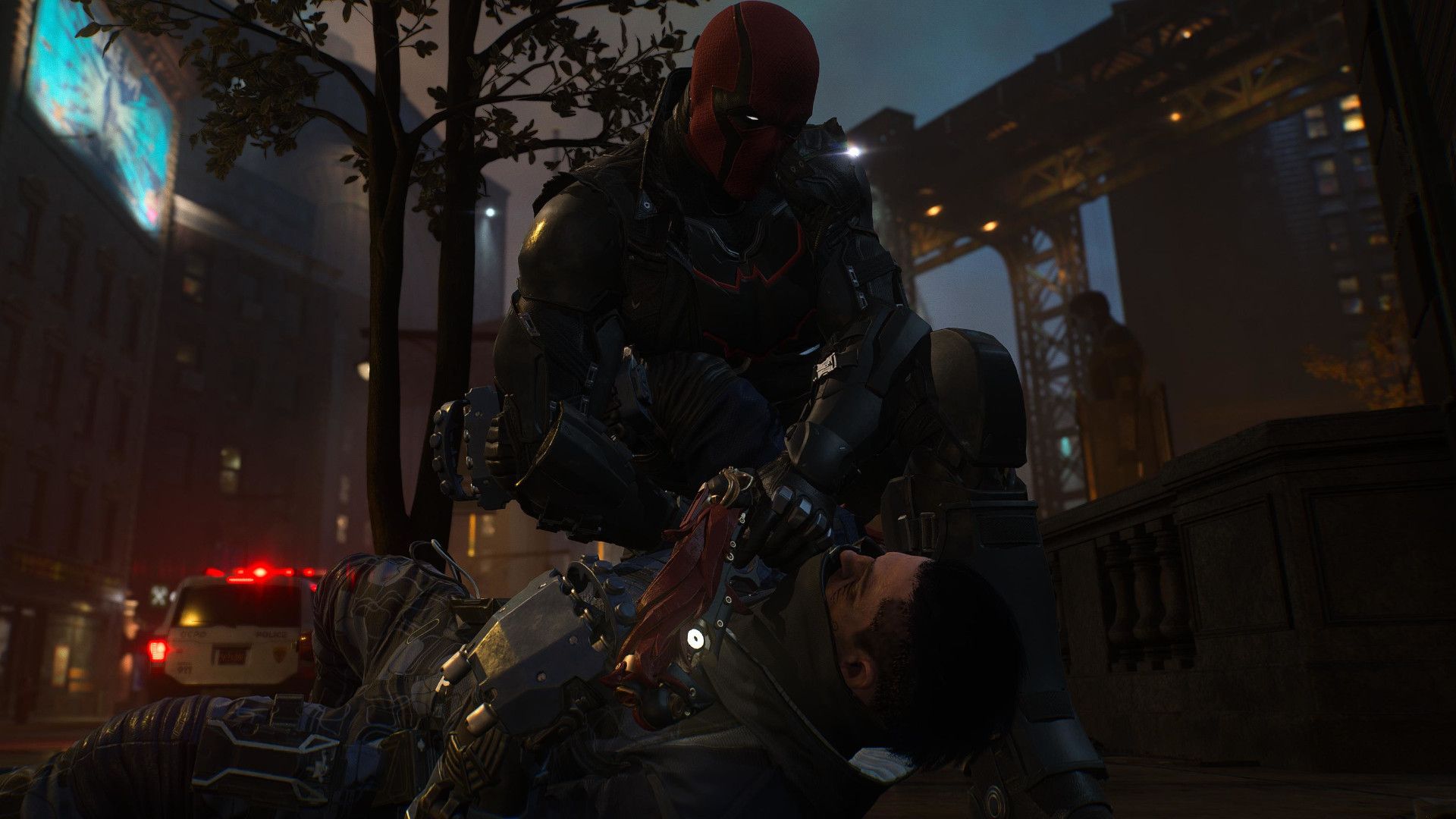 Coming right out of the gate, I am no superhero buff. I know a little bit here and there and I can muddle my way through a casual conversation about some of the most notable heroes and some of those innately unknown ones. That is to say, though, I’m still human and I finally, after eyeballing it since launch, picked up Gotham Knights.

Of all the massive pool of heroes out there, Batman is probably one of the ones I can hold a relatively more in depth conversation about, especially since I immensely enjoyed playing through previous Batman games like the triad and true Arkham series. Sure, it’s not the same dev, but it’s still a Batman game… right?

Tale Of Three Robins And A Bat Girl

Gotham Knights isn’t like the previous Caped Crusader games in a lot of different ways. Chief among them is the fact you don’t play as the titular Gotham savior, instead you get your pick between four different notable apprentices — the Tim Drake Robin, Nightwing, Red Hood, or Batgirl. It’s already established and painfully obvious that this isn’t taking place in the Arkham line of games as all the characters seem revamped with Red Hood taking the biggest turn.

Basically, Batman’s dead and Gotham’s criminal underworld boils to the surface. All the villains have their own story like Mr. Freeze, Clayface, and Harley Quinn. Mr. Freeze felt betrayed by being backstabbed by Batman, who promised him a cure for his ailment, Clayface is attempting to rebuild and make a movie, and Harley is just doing Harley stuff.

The main big bad, though, isn’t them, they’re kinda small fish to fry compared to the Court of Owls and its leading competition, the League of Shadows. That said, The Court of Owls is rather underwhelming as they don’t really flex their power as much as you’d think they would after being chased down by a bunch of teens in spandex.

Performance Of A Hero

Some care about this, others don’t. I don’t typically feel too strongly about the game’s framerate. In this case, though, I find it weird just how jittery it can be. Even on console, I do notice visible stutters, especially while traversing Gotham’s open world at high speeds. It feels like it’s playing below even 30fps. I’m not much of a framerate snob, but with a console as powerful as the PS5, you’d think it wouldn’t hurt performance as much as it does.

It seems like each Batman-esque game tries to better itself in some fashion, a valiant effort that actually feels like they tried this time. You get to traverse through the sectors of Gotham while patrolling at night as the character of your choice. During your travels, you can come across instances of criminal activity, which can then be thwarted in order to find out about bigger activity like witnesses in danger, illegal hackings, bomb threats, or even criminal strongholds.

After each time returning to your base of operations, you can get a lowdown on your combat and crime fighting stats. You aren’t typically pressured to go back to the Belfry and instead are just lightly encouraged to, but crime never sleeps and odds are the moment you are heading back, someone needs your super help.

If the number of characters didn’t clue you in, it’s both a single player and multiplayer experience where you and three other chums can hop online and duke it out against mainstay baddies and common street thugs. It is too bad, though, that it’s quite limited. Cross-play isn’t a thing, meaning playing a PlayStation copy with someone on PC is a no-go. And, of course, like most games nowadays, no such thing as couch co-op, though, admittedly, that would be a difficult task for the team to include. But, hey it’s still a fine game to play for hours without a companion.

All this praise does need to be offset as I cannot tell you this game is without flaws. There are still bugs that can harm the experience — I know I fell through the floor once or twice while going at high speeds on the bike — but over all, what harms the experience even more isn’t the bugs. The game is more or less the same thing, sure you can spice it up with a bit of your own flare like sneaking around or going balls-to-the-wall assault, but in the end, you’re still trapped in an endless cycle of fighting the same few groups with very little variation.

Much like any open world game, it suffers from having to make Gotham feel lived in while also not making it feel stagnant, something very few games can achieve. The same few criminal activities happen across the city and it’s your job to stop them. A cop is trouble and you need to stop the Mob or Freaks or Regulators. Certainly, it’s still a good time, but not as good as it could be.

The game attempts to hide this tedious gameplay issue behind a level up system, which is par for the course, but it just feels lackluster in comparison to how much they probably expected you to do.

Oh, and let’s not forget the combat is… not the same. Rocksteady’s rather fluid combat didn’t translate too well with the team at WB Games Montreal. It isn’t super clunky, but it isn’t as clean a feeling as when Rocksteady solidified that style of superhero combat in the Arkham games.

Special But Not Really

Gotham Knights would be a great game, its sandbox approach to exploring Gotham is top-notch and its story keeps you just engaged enough to keep playing. The problem lies in the game’s lackluster combat and endless fighting cycles of beating up the same factions over and over and over with little to no variation to dialogue.

You can buy Gotham Knights on PSN here.