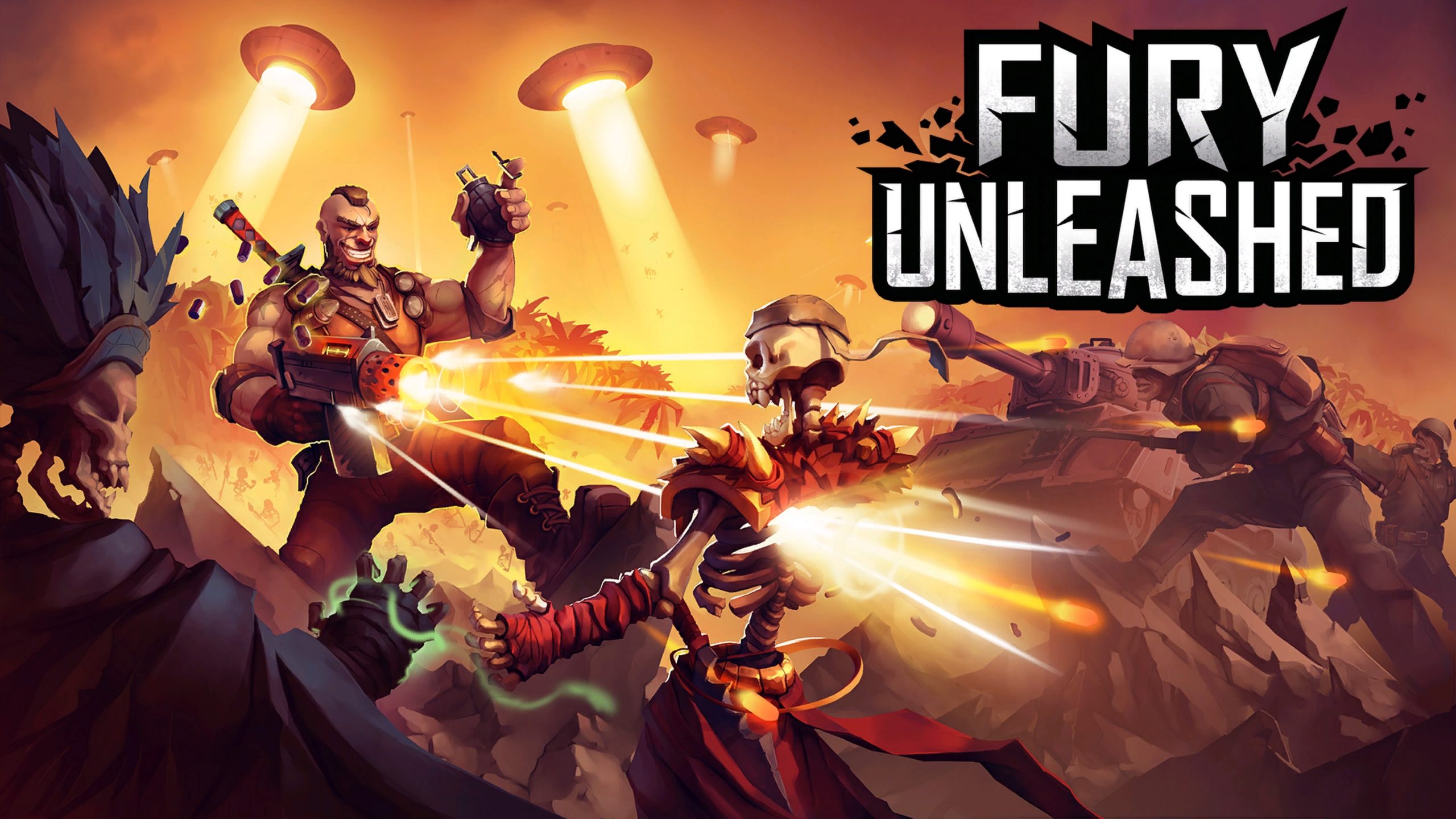 Fury Unleashed is, for quite some time, the most fun I have had with an indie game. Its side-scrolling presentation is perfect for the frenzied combat that will keep your trigger finger to an itch. This format falls in line uniquely with a comic book format—which means you will be fighting your way through action-packed panels. Along with a surprisingly meaningful plot, this is a truly impressive roguelike that will keep you busy and entertained, despite a brief playtime.

You play as Fury, the protagonist of a long-running comic book series. The three series entries you will play follow his adventures to rid the world of evil monsters, aliens, etc. What is most notable is the underlining, grounded story told throughout the levels. These documents tell a meta tale that follows Fury’s creator as he faces writer’s block and increasingly negative reception from his reader fanbase. As a result, he considers discontinuing the series. As Fury, you unearth letters and emails that reveal the plot, and ultimately try to save your fading fictional world. All the while, a mysterious being named Mr. Doodle ominously tells you to push forward and find out the truth.

It was a surprise to experience a substantial story in an arcade-centric game. What becomes of it is a testament, not only to the power of comic books but also to the creative process. It takes dedication and passion for creating any kind of art form in life, and I empathized with the writer’s struggle. Seeing the disappointed feedback from Fury’s fans was upsetting, and I believed in the kind of insecurity that would have been felt within the writer. But, ultimately, the game proves that “the worst enemy to creativity is self-doubt,” and that this internal enemy can be defeated. Unfortunately, the game does not play to this strength enough—no special music is played during these segments, and the story is ultimately sidetracked in favor of gameplay. A shame, since this could have gone down as an innovative way to communicate themes through a roguelike structure.

Thankfully, the gameplay is pretty darn good. Each of the three acts is treated like a comic book issue with three ‘Chapters’ (sub-levels). While playing, you can double-jump, dash, and run in moments where light platforming is needed. Sometimes you will need to dodge a mage’s spell or avoid slime falling from a pipe. As for combat, you have a set of grenades, a freeze-inducing superpower, and, naturally, a jaw-dropping arsenal of weapons. There is a wide selection – from plasma beams and blade-spewers to good ol’ fashioned shotguns and assault rifles. To shoot, you simply point the right analog stick, which is very robust. Each has its own unique stats like DPS, range, and reload time. No matter what, there will be a gun to suit your needs.

Fury is a machismo badass, so he likes to show off by holding a gun in one hand and a melee weapon in the other. Like its ranged counterparts, there is a bountiful amount of options for up-close-and-personal combat. There are blades like machetes and battle axes to blunt instruments such as baseball bats and even a frying pan. It is good to use a combination of your brawn and bullets to maintain a steady combo. Combos are pulled off when you kill enemies quickly and without getting hit. The higher the multiplier, the more chance health orbs will be dropped by enemies. You can also gain more ink.

Leveling up and Merchants

‘Black ink’ is what you level up with. After losing, the amount you accumulated will transfer to skill points, allowing you to upgrade health and special buffs. Thankfully, your character’s progress carries over with every run, unlike other roguelikes. However, what vanishes upon death is ‘golden ink.’ This is used for trading with the various curious characters you will come across. ‘The Inkmaster,’ for instance, will give you rare items in exchange for this resource. Other strangers may ask for other things, like ‘Vlad the Peaceful,’ will ask you for some health in exchange for a random piece of equipment, but most will thankfully not ask for your blood. You may even find quest-givers whose tasks never feel like a hassle and yield worthwhile rewards.

I really dig the portraits for the characters because they are authentic to how modern comic character designs look. I also love how the visuals make for a tremendous tribute to comic books in general. When you defeat an enemy, you will be granted a satisfying message, E.G., “SPLASH.” There are even times when the game goes full pen-and-paper by allowing you to play in black-and-white panels. These particular rooms are accessed through random portals with a particular prerequisite, such as not getting hit once. This is but one element that can be randomized throughout each run.

Replayability and Randomness Makes the Runs

Each panel is a joy to blast your way through. They are filled with diverse enemies and completely randomized pick-ups/characters. While the story is brief, I cannot wait to have my umpteenth run, attempting the many crushing difficulties standing between me and some trophies. I want to unlock each of the dozens of weapons and armor pieces; to beat each of the 40 brooding bosses; to upgrade my Leon: the Professional-looking dude to be the ultimate badass. There is a lot of replay value tucked into this cheap package. You would be remiss not to try Fury Unleashed, especially if you are a comic book fan.

Fury Unleashed is one of the best indie games of 2020, and one of the most excellent examples of the roguelite genre this generation. While it may be on the short side, this action co-op title should satisfy fans of Metal Slug and then some.  Cool comic-inspired visuals, an inspiring story, and compelling moment-to-moment gameplay make this a stellar shooter.

You can buy Fury Unleashed on PSN here.