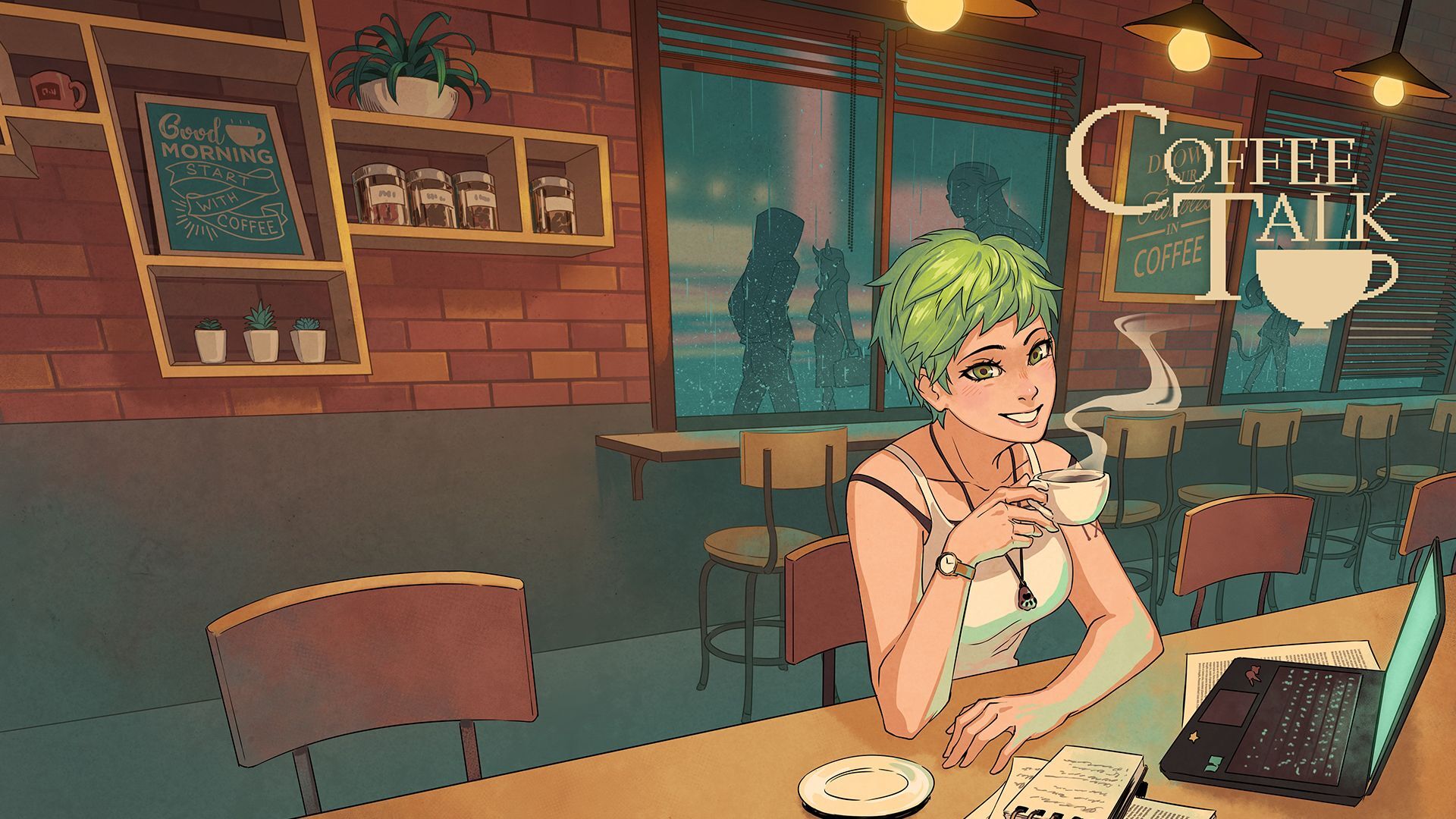 Coffee Talk is a game with warm intentions. It presents you with a collection of heart-warming stories involving family, love, friendship, and understanding. While some of these themes are treated with occasionally obvious preachiness, the story and its likable cast of characters grow on you with each chilled conversation. Coupled with an enjoyable challenge mode, you will have a pretty lovely time overall.

Coffee Talk sets up a world where fantastical races have integrated into society and now live alongside each other. These races range from vampires and werewolves to succubi and elves. The story takes place in Seattle, September 2020. You play as a barista, running the titular cafe. It opens only at night when the rain is pouring, and neon lights are glimmering. Many interesting individuals are attracted to the cozy cafe — and they come for more than coffee.

Judging from the dialogue delivered by the barista, it is evident that a couple of customers are regulars. Freya, the most frequent visitor, is a green-haired journalist and aspiring novelist. There is also Jorji, a cop who often enters for a break from his post nearby.  The rest of the cast are new faces to the barista. This pre-establishment is an effective way to kick things off because your one-to-one conversations with Freya melds all the plot beats together nicely.

Stories that are Special

Events take place over two weeks. During this time, you will meet, serve, and talk to an assortment of fascinating folk. They gradually reveal their problems and desires with each passing day. A couple’s love prevented by racial divide, a father’s distance from his daughter, or an alien’s objective to understand the ways of humanity. These are some of the tales that you will hear beyond the barista counter. Some are more engaging than others, but all are replete with grounded sincerity.

In-between heartfelt chats, the barista will take hot drink orders. You will have access to several ingredients to make the perfect cup of hot chocolate, tea, herbal tea, or a good ol’ fashioned cup of Joe. Orders are conveyed through in-text speech and are worded relatively. You could be told, “The usual,” “cinnamon and lemon,” or a special drink like a “Teh Tarik,” depending on the character and their mood. Each time you complete a new recipe, it gets added to the Brewpad, which acts as a compendium for all drinks. Luckily, you can bring this baby out whenever you are in doubt of what ingredients to include.

Coffee-making is not just some gimmicky feature. Your orders can impact the game’s ending. I got a few orders wrong, consequently resulting in a bitter-sweet conclusion. Although the specific parameters for getting the best outcome is not definitive, it is best to pay attention to preference and become deliberate. As you add different ingredients, factors of quality will increase or decrease. If one wants something “very sweet,” two helpings of honey should suffice.

Optionally, you can top an order off by adding latte art. If you admire or are curious about the process, Coffee Talk gives a nifty simulation of what you can do with microfoam. It is a purely aesthetic choice, though, and will not affect the gameplay in any way.

Coffee Talk prides itself on its audio-visual presentation. For the former, there is no voiced dialogue but rather the ambiance of a door swinging or sipping of a cup. Voicelessness is good here because you can envisage the characters’ voices using your imagination, somewhat adding to the immersion. The sound effects are also quite soothing.

Visually speaking, the pixel art style is pleasing. There is clarity in the colors and how well they complement one another. The design of the cafe itself evokes a retro feel. Its pastel color scheme also allows the vibrant character designs to stand out. Inspiration from 90’s anime like Cowboy Bebop is apparent in some of these designs. Some others follow the Alternative Seattle scene. An eminent self-consciousness seeps throughout as the cast comments on each other’s appearances and ideologies. Facially, characters are bright and expressive, letting you sympathize easily.

A lo-fi, chillhop soundtrack, composed by Andrew Jeremy underpins the game. He does a great job of helping shape the mood with his calming music, further enriching the experience. My favorite song of the soundtrack is Tenderhearted, a beautiful piano piece that encapsulates Coffee Talk’s overarching theme of compassion and gentleness which is prevalent throughout.

I love a good story, but I also want to play. Coffee Talk mostly quenched my thirst for pure gameplay by way of delivering a healthy filling of arcadey goodness with its Endless selection. There are two modes on offer: The first is Free Mode, a kind of practice mode and could even appeal to a future ASMR video creator. Challenge Mode is the juicy one, testing your quickness with orders. The faster you are, the more time and points you will earn. It is a fun distraction and a reason to come back after finishing the story.

Negatives: A Lack of Interactivity; Heavy-Handedness

Now, I understand Toge Productions’ intent. The decision to ditch dialogue options in favor of consequences through coffee-making is a fresh concept. However, dialogue options have become an immersive and expected mechanic of games like Coffee Talk. The pitfalls of this omission were potentially avoidable if the barista was unnamable and silent. Instead, you can enter your name, and the barista has his (presumably) own lines of dialogue. This decision is wrong for immersion, especially when the game is presented to you in the barista’s perspective, implying the idea that you are running a cafe shop. However, the personality of the coffeemaker is pretty specific. Seeing my name attributed to some of the cringey dialogue lines uttered by my playable character was quite irritating.

I also do not dig the handling of some themes. Racial tensions are sometimes unsubtly brought up. The indubitably didactic quality of some sentences brought me out of the game and it reminded me that I was reading dialogue written by liberal-minded gamers (not a bad thing, of course.) Moreover, the game brings up touchy topics and neglects to further explore them. These sensitivities appear in newspapers at the start of each day. Moreover, the fact that the preamble states, “The great war between races is but a footnote in history” is also surface-level. It seems like a few plot points mentioned in these mediums become but a footnote in the grand scheme of the plot — resulting in arbitrary exposition and a wilted attempt to tackle relevant topics.

Coffee Talk offers a filling brew of coffee-making simulation, relatable scenarios, and welcoming atmosphere. While it lacks in interactivity, the candidly everyday stories will keep you engaged. So come on into Coffee Talk and experience a fortnight filled with warmth and solidarity.

Coffee Talk is now available on PSN and the Microsoft Store.