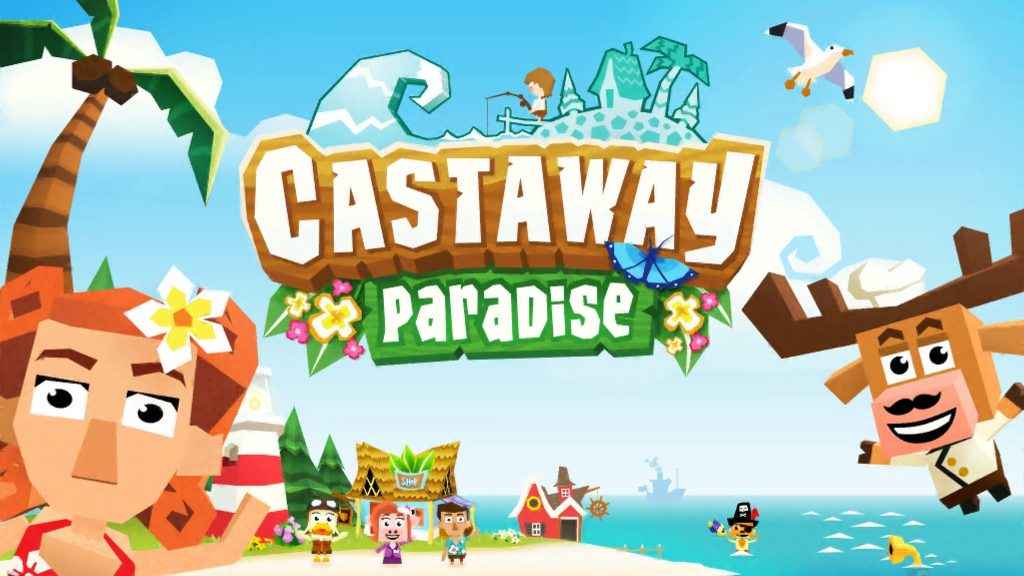 It’s pretty safe to say that getting stranded on an island would be a very stressful experience. But according to Castaway Paradise it’s a, well, a paradise. No big deal. All kidding aside, Castaway Paradise is a pretty fun game even though it does get a bit tedious at times. The influence of Animal Crossing is immediately apparent but that doesn’t mean this little slice of paradise is a copy cat. It’s close, but it’s different enough to stand out on its own. And at the end of the day, there are definitely worse places to get stranded.

It All Begins With a Storm

Castaway Paradise begins quite simply. You get caught in a storm that strands you on a tropical island. It’s full of interesting characters and a whole lot of things that need done since the island took some damage from the storm as well. As soon as you crawl onto shore, there are chores at hand. The characters are all very interesting and entertaining. My favorite was a grumpy baboon named Angus. As you do tasks, you slowly rebuild and return the island to its former glory.

Is This a Mobile Game?

One thing you may notice fairly quickly is that this game feels like a mobile game. All the tasks are based on timers and you can only have up to three quests from NPCs at a time. There is a reason for that. Castaway Paradise was originally released on Facebook and, shortly after, mobile. So there are plenty of mechanics that make it feel like a mobile game. There are even daily rewards and seasonal events.

Before you start raising pitchforks and torches, keep in mind that it’s not as bad as it sounds. While some of those mechanics are in the game, it doesn’t quite reach that level of mobile gaming in that you can only play for a certain amount of time and then you have to wait. It’s a bit of a mix. Yes, everything runs on timers but there are so many other things to do in the game that you don’t have to literally wait on something to get done in order to do something else.

Tasks range from picking up objects from the beach, delivering items to other characters, to fixing up buildings. In other words, while I’m waiting for my plants to grow I can go fishing. Or I could do some quests for NPCs. Or I could go collect bugs. By the time I return the plants are ready to go and then I can plant some more and then go decorate my house or repair some buildings. You get the drift. This game has a surprisingly good balance as far as your tasks go.

While you’re busy doing all these chores you start unlocking more of the island and meeting more characters. All the while things are slowly being rebuilt around the island. There is a certain satisfaction in watching it all come back to life with new buildings and new areas. Seeing the island progress into something better is what makes you continue playing. As it should be.

It’s worth mentioning that the game does hit a plateau after a certain amount of hours. Once you hit a certain point in the game, it turns into a more open ended game. You are left to your own devices. Which isn’t such a bad thing necessarily but there is a noticeable shift there.

When you’re not doing tasks and chores for everyone else you can also decorate your home. Which also grows as you play the game and upgrade it. Here you can use items you have found or purchased to spruce it up. You earn the ability to gain access to more items as you level up. Leveling up occurs, of course, from doing tasks. You can also change your outfit as you purchase and find new outfits. The customization is not crazy deep but there is plenty to have fun with.

Wait, Which Button Was It?

While the overall gameplay is fun, controlling your character and using some of the menus can be a chore (pun maybe intended). It took some practice for me to get the hang of switching between tools that I needed to use. It’s not wrong per say, but the way it’s setup can be a bit awkward. Same thing with the menus as well. I found that browsing through the menus, specifically the catalog, feels like it’s not quite optimized for use with a controller. Eventually, I managed to get used to it but it was a struggle at times.

The graphics could be considered a bit dated looking. The animals wondering around the island are polygonal, similar to how characters looked in PS1. But that’s not to say it’s a bad thing. In fact, it adds to the overall charm of the game. It’s a design choice by the developers that, at the end of the day, works just fine. The island expands quite a bit as you play and it all looks pretty good with the blocky style they have going on. Again, the influence from Animal Crossing is extremely obvious here.

Castaway Paradise has a lot of potential to be a fun game. It’s relaxing and satisfying in the same way that some good mobile games and Animal Crossing are. The cycle of completing tasks, rebuilding, and customizing works pretty good. It’s not as in depth as other games of this genre however. And despite all the charm it eventually falls a bit short of being really good. If you like games like Animal Crossing you’ll probably enjoy this one. At least for a time. Eventually it starts to lose its luster. Definitely still worth a try though.