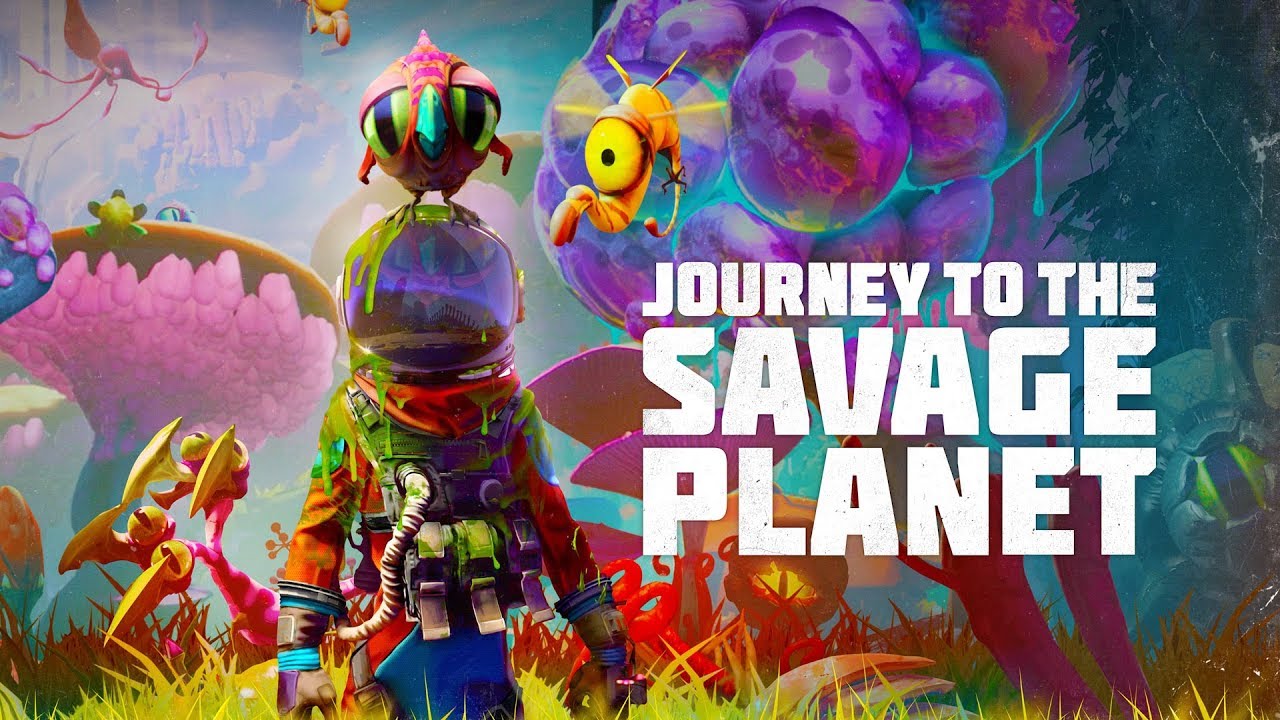 Journey to the Savage Planet is a game of astounding ambition. It is a confident revitalization of the exploration-adventure genre, an ode to the pulpy “Golden Age” of sci-fi, and an earnest satire. Mish-mashing these elements, the game provides a unique experience that feels condensed but complete. The twenty-five-hours-or-so of content lives up to the title, offering an opportunity to channel your inner pioneer and trailblaze through a world wrought with danger and beauty. With the option for a friend to tag along, this journey is one that is worth the price of the interstellar voyage, even if Kindred Aerospace is facing budget cuts…

Employee of the Month

You play as an employee of Kindred Aerospace, the self-proclaimed fourth-best space exploration company in the galaxy. Your task is to explore and evaluate your assigned planet in a bid to expand humanity’s habitat while Earth is facing extreme climate change and resource depletion. However, upon your arrival to AR-Y 26, you discover not only extraterrestrial life but also remnants of an ancient alien civilization! Guiding you every step of the way (well, most of them) is your A.I. pal E.K.O. With her perky personality and cheeky commentary, she is a great guide.

Your spaceship is the rinky-dink Javelin — your haven from hostilities. It is an unconventional hub because of how it fits with the narrative. Details like confined space, an unusable shower, and a shoddy computer all hammer home the fact that Kindred Aerospace — and their sub-division Technologies — is not concerned about anything but your workload. Wanna quit? Well, a rough landing causes the Javelin’s fuel tank to be fully drained, leaving you stranded (finding enough fuel to make the journey home is optional.)

Developer Typhoon Studios blended aspects of the exploration, puzzle, Metroidvania, and FPS genres to form the core foundation of Journey to the Savage Planet. From the start, you are equipped with a pistol dubbed the ‘Nomad’ and a scanner that can document the planet’s fauna, flora, and alien artifacts. As you progress through the campaign’s mission format, new equipment and upgrades are made available. Everything is constructed and improved with the Javelin’s 3d printer. As guessed, you will need materials. The three elements — carbon, silicon, and aluminum — are found in natural deposits and fallen creatures, Upon return to the Javelin, all your collected resources are deposited for safekeeping.

Gunplay feels punchy and satisfying. So it should be since the pistol is the only gun you will be using. Enemies range from the head-on grounded pikemanders to the projectile-launching flying jellywafts. Bosses, including mini ones, have big yellow weak spots. As a result, the way these fights play out is derivative.

On the other hand (no pun intended,) the game features the best ambidextrous combat since Bioshock. Your character’s left hand can hold things such as metaphorical food (Grob) to lure, an electrical fruit to fry, or even a gelatinous blob to lay down a natural trampoline. This variety opens up a multitude of possible approaches you could take to get the upper hand on all manner of beasts.

Kindred Aerospace generously placed a Meat Buddy machine in the Javelin. This product processes meat wastage and reconstitutes it all to create a cooperative companion! All you need to do is invite a player from your friend’s list, and your “new best friend will emerge, ready to cuddle!” If you can trust this Slymo commercial, do not believe the apocryphal trophy/achievement results that reveal over 90% of all sessions involve players slapping each other. Not very “cuddly.”

No extra fat is added to this format. Your partner is there to simply assist in your usual pursuits, especially concerning difficult battles. Moreover, I highly recommend tackling bosses with a friend, since two heads are proverbially better than one. You or your friend have a 20-second countdown to death, offering a generous amount of time to save some bacon (especially applying to your non-hosting friend.) Even better, a simple push of the square button is solely required for a revival.

There are two significant criticisms I would aim at this addition. Firstly, there is no public hosting. The ability to open up a session to strangers is an essential part of modern co-op infrastructure. Not everyone has a friend available on stand-by to play the same game. Secondly, your fellow expeditionary’s gathered loot and discoveries do not carry over to their own campaign. As a result, the main two incentives for joining a session are trophy hunting and clowning around. Despite these fundamental flaws, co-op is a blast.

In interviews, creative director Alex Hutchinson described Journey to the Savage Planet as being an “interactive comedy.” This special form of humor is achieved in a variety of quirky ways. Firstly, the animation is a crucial component. Most actions you perform include a touch of character. These peculiarities are quite prevalent in co-op, where you can see your partner walk in a goofy, jiving way. Other charming animations include a weird hand gesture when you push a button and the messy eye-poke takedown of a stationary predator called the sproutlook.

There are also unusual designs and animations of the many different types of fauna. The pufferbird is one that steals the show — a kind of cute mascot for the game. Seeing one either get stuck in bile, electrocuted, or flying after I kick it is a guilty pleasure. There is also the baboushka, the other cute prey. It wails in terror when you approach and splits its body once you hit it.

The comedy shines with less interactive components too. As you progress, FMV commercials (like Meat Buddy) and spam emails are available to view on the Javelin. The former — ads — is an absurd collection of scathing satire. Topics like microtransactions, corporatism, and materialism are handled with entertaining irreverence. In-game comments by EKO are also commentaries, covering things from generic game design to existential philosophy.

The art style is simply striking. Verdant forests pop out of the screen with lush green fields and orangey-brown rocks. Sky blue butterflies flutter once you disturb their stationary swarm. Blood-red crystals illuminate mysterious caves and caverns, foreshadowing the reddish lava that often oozes within. You look down upon an epic vista each time you discover a new area, evoking grandeur in its vibrancy. Check out the screenshot below, which showcases the Journey to the game’s stunningly consistent color palette.

AR-Y 26 is an extraordinary realm of environments because Biomes are diverse. From icy glaciers to arid canyons, this is a planet teeming to the brim with natural wonders. The flora flourishing from these areas are also sundry. Pink trees and curvy plants are seen far and wide. Explosive and electrical seeds can even be plucked for throwables, being held in your left hand for earlier-mentioned ambidextrous combat.

The level of immersion is inexplicable. Besides your HUD, almost everything in the Journey to the Savage Planet is diegetic, meaning that most of the mechanics exist within the universe and lore. For example, once you die, a clone yourself is created, but with your memories intact. Dropped resources are placed in an..ahem Dark Souls-esque death box that is fitted with a robotic voice announcing “this is property of Kindred Aerospace.”

The photo mode is another awesome diegetic inclusion. Once activated, you control a cartographer. These are drones that survey your surroundings and locate valuable points of interest. From my experience with photography,  I want to thank Typhoon for letting me capture their game’s mystery and magnificence in, hopefully, all its splendor.

We have come a long way from shallow collectible implementation, E.G., pigeons in Grand Theft Auto IV. For evidence, we need to look no further than this. Placed around the planet are various kinds of bits-and-bobs to collect. You can scan alien tablets to piece together video transmissions, eat orange goo for XP upgrades, find every teleporter, and uncover an interesting backstory of a previous explorer’s diary logs. As you unlock pieces of gear like the grappling hook, you can access different areas that will yield these discoveries.

Did I mention the Kindex? To satisfy completionist compulsions, catalog every nook and cranny this world has to offer. And while you are at it, complete ‘science experiments,’ challenges which increase your explorer rank and subsequently unlock more upgrades.

Some gripes I have with Journey to the Savage Planet include the unengaging story, disappointing final boss, and clichéd ancient alien design. These three aspects could have been improved upon a lot more since the set-up is enticing, and the charismatic CEO Martin Tweed could have been more involved instead of the occasional PSAs and video diaries. The last mission also leaves a sour taste because it is unfair and monotonous. While you scramble to solve a puzzle, projectiles constantly bombard you from all different angles. Consequently, the convoluted design of the final area obstructs progress, protracting the time it takes to find everything you need to proceed to the final boss. I had to bury my own body around eight times as a silver lining for my failures (you gain extra resources.)

The crafting interface does not offer the most friendly user interface. People slapping on the No Man’s Sky comparison will be loathed by the lack of a pin system for crafting recipes. If you want to remember how much carbon you need for that next upgrade, for example, you will need to write it down on a piece of paper. There are little to no reminder prompts unless you are on the ship to which EKO only tells you, “You can craft an item.”

Journeying to a Close

An exploration title like this does not come around often. Typhoon Studios have crafted a highly enjoyable game with amusing humor and distinctive art direction. Moreover, this debut is a surprisingly stupendous sci-fi romp that shall make its swift journey to gamers’ hearts and imaginations everywhere.