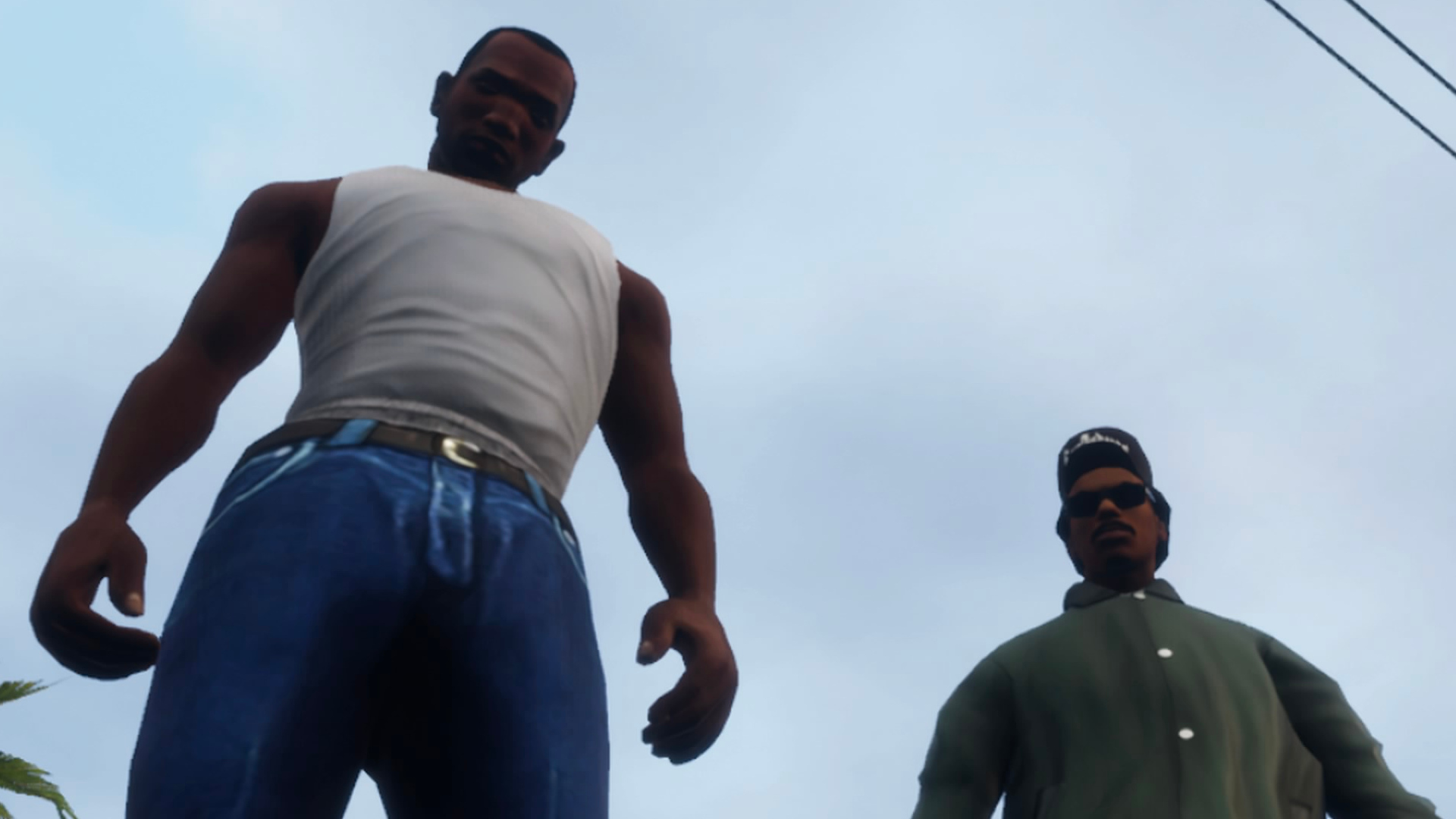 Since the publication of this review, almost all of the issues noted in this review have now been fixed with post-launch patches to the GTA Trilogy: Definitive Edition. The games look awesome now and have very little graphical issues. If I were to rescore this in its current state, it would be an 8.2/10. Please bear this in mind when reading points about the lack of certain details, rain effects, wonky side character models, etc.

The mainline 3D era of Grand Theft Auto made an immense impact on gaming. From GTA III laying the groundwork for the open-world format as we know it and Vice City refining the formula in a nostalgic setting to San Andreas’ scope, these three titles are an essential part of the medium’s history. These remasters attempt to modernize the look of these games and make some quality-of-life improvements. While there is a considerable downgrade in artistic direction and many neglectful oversights, Grove Street Games does a mostly decent job at modernizing these classics for a new generation.

This trilogy is a remaster of GTA III, Vice City, and San Andreas, not a remake. As such, all games feature animations, physics, and general gameplay identical to the original. However, the engine in use is the Unreal Engine instead of RenderWare and the textures are now all HD. But before we get into the significant differences, let’s go over the PS4 version quickly. It runs at 30-50fps at the time of its launch state. It also isn’t 4k, unlike the PS5 versions, which sucks. There are two setting modes. First is “Fidelity,” which gives more details like water reflections at 30fps capped. Meanwhile, “Performance” mode gives you the supposedly uncapped framerate without those effects. So this last-generation option is still viable, even if it is ultimately inferior in terms of performance compared to next-gen consoles.

Across all platforms, there are quality-of-life adjustments that make all the difference. You can access a weapon and radio wheel that works just like GTA V. Sure, it feels a bit weird to have that modern mechanic in old games, but it works better now. Moreover, you can now restart from checkpoints, but seemingly only in San Andreas. Sure, in the other games, you don’t lose any weapons and cash upon death, but there are no checkpoints for what are arguably more challenging games.

The most drastic addition is the sophisticated aiming system, which locks onto enemies (also like GTA V), however, when you aim at enemies, there is an unnecessary white outline on the characters that just distracts rather than helps. As such, San Andreas’ classic lock-on system is still superior. Overall, though, these games play more smoothly thanks to these refinements.

Out-ish With The Old, In With The New

To scratch the surface of the environmental overhaul, let’s go over the apparent positives. The new lighting looks fantastic and really adds a new layer. It sure can look pretty, from neon signs and traffic lights reflecting on cars and pedestrians to physics-based rendering. Rebuilt foliage also breathes new life into each map, replacing flat 2D textures with lush, long fields of grass that actually move when collided with. Heck, a single weed sticking out of the pavement in San Andreas will move if you walk into it. In terms of urbanity, all buildings and roads are newly textured, and they look superb. If you wanna look into a building, it’ll actually have fully-modeled interiors now. Sure, you can’t enter them, but this new level of immersion is impressive. These overhauls ultimately fix the flat looks of the older games, allowing the worlds to feel more lifelike.

A major caveat of this trilogy is that it is remastered from the mobile ports. These ports removed a lot of what made the originals special, and the omissions carried over. The most tremendous loss is each game’s sense of art direction, which is void in favor of clarity. For example, GTA III and San Andreas are games with moody atmospheres. This tone was partly captured by their PS2 versions’ usage of bluish haze (GIII) or an orange glow (SA), lending a wonderfully stylish aesthetic. Now, there is no color coordination, often looking flat. At night all games look better, but during the daytime, it typically looks boring. Details such as newspapers blowing through the streets and a rotating burger above a fast-food joint are gone. There are dozens of other mistakes, too, due to AI upscaling and general neglect that hampers your enjoyment if you really pay attention.

Character models have also had a major redo. Firstly, and this is subjective, the three main protagonists all look better than their PS2 counterparts. Starting from Grand Theft Auto III, Claude looks more emotive than his polygon-heavy original model. I also prefer Tommy’s new Vice City model, but he still looks better in the Anniversary Edition. Finally, CJ has a more detailed design, technically looking better but lacking more facial expression within cutscenes. The clothing on all character models look fantastic, too, with detailed stitching on fabrics and a sense of wearability instead of just being flat 2D textures. Overall, I think they are an improvement over the originals, although your mileage may vary.

But then there are hit-and-miss models of the side characters. Some characters have lost the detail like forehead lines and have overly smooth, gel-like hair that reflects with the light too much, leaving them looking a bit like plastic dolls. What’s worse is the lighting in many of the cutscenes, which either looks way too dark (San Andreas) or bright and overly reflective on the characters (GTA III). That shift in the art style I mentioned earlier applies to these designs since everyone looks more cartoony than the semi-realistic style Rockstar was initially going for. San Andreas suffers most because it is a game with a gritty tone and the most realistic environment. However, Vice City looks the most consistent out of the trilogy since it was vibrant to begin with. Nonetheless, I do think the models are mostly well-made and superior.

How You Imagined The Games From Your Childhood

The redone weather system and draw distancing is also a mixed bag across the trilogy. San Andreas once again takes the brunt of it, with no heat waves to really illuminate that West Coast setting. There also isn’t strong dust storm or fog effects. Instead, the game favors perfect draw distancing. While the distant skylines look great on-foot and when driving, seeing the whole map from a plane or tall building removes all mystique the game once had. Gone is the ambience, and the map just feels small now. There is also the rain effects, which are odd since they look more like looped animations rather than something resembling an authentic downpour.

However, there are more positive things to find as the day passes in these games, like real-time shadowing. Shadows get cast very realistically according to the day-night cycle. Speaking of which, the cycle itself emphasizes parts of the day with beautiful results. While daytime hours can look dull, nighttime presents the player with very high-quality star and moon textures. And, if you are playing on next-gen, you get volumetric clouds too. When both dawn and dusk periods occur, these elements of the new art style come together to produce genuinely picturesque results. You’ll get the neon sign of Vice City’s Ocean View hotel, reflected on passersby below, or the drearily moody look of Liberty city. Whatever you take out of these games, you got to admit they can look striking and that the fidelity is a far cry from the PS2-era of consoles.

The Remasters Look Good, All They Need Are Patches

While it has its rough edges, Grand Theft Auto: The Trilogy – The Definitive Edition is a worthwhile remaster of three classic titles. Its visual overhaul prevents these games from feeling overly dated, and the quality-of-life improvements modernize the experience in a way that meets today’s standards. Sure, its new art style and character models won’t mesh well with everyone, but it may grow on gamers as time goes by. And sure, while these aren’t the “definitive” editions we expected, this is an admirable attempt to introduce three groundbreaking games to a new generation, and I’m glad it exists.

You can buy Grand Theft Auto: The Trilogy – The Definitive Edition cross-platform on PSN here.