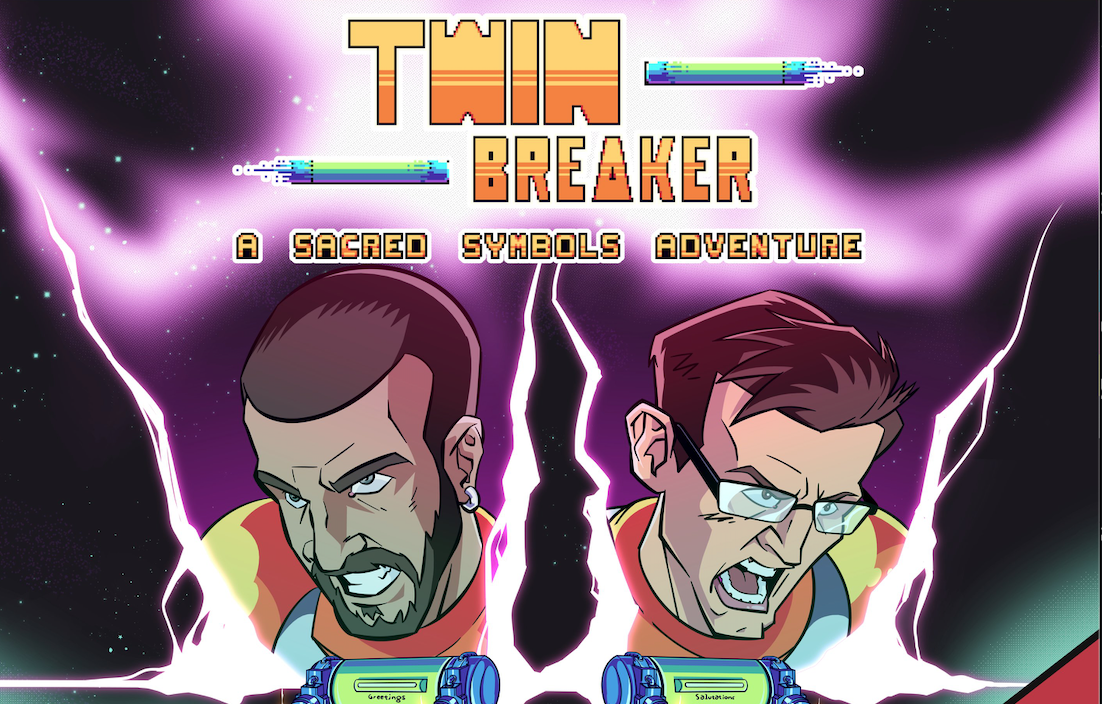 Brick breaker games are a dime a dozen nowadays. Controlling a paddle, obtaining power-ups, and precisely calculating the ball’s trajectory was always a delightful formula. Twin Breaker: A Sacred Symbols Adventure is a unique homage to this underrated arcade genre. The game mostly succeeds — channeling retro-era sensibilities while paving its own path with admirably radical design choices. While some of its ambition does not always hit the mark, brick breaker fans will have a ball with Twin Breaker.

Surprisingly, there is a tacked-on narrative. As told through a 5-minute introduction, the game is set in a tumultuous future where World War III devastated most of the world. At the same time, the United States, prospering from neutrality, started aiming toward interstellar travel. NASA-produced ‘Generation Ships’ became the final solution, vessels that travel at sub-light speed to explore different solar systems. Each ship’s crew consecutively lost all traces of contact, leaving a mystery as to the success of the space program. When the first Generation Ship temporarily appears and emits data leading to the discovery of a wormhole, two chosen pilots embark on a mission of investigation.

While it is pleasing to find a story in an arcade game, the writing is needlessly convoluted. The impact of broad themes are undermined by a genre that is not catered for storytelling. Every five levels-or-so show a conversation between the two pilots, but they all feel samey and unengaging. Finally, with its roots in internet culture (Sacred Symbols is the name of a PlayStation podcast,) the whole plot is hard to take seriously. As a result, the lack of much humor is a remissive move by a prevalent writer in video game criticism — Colin Moriarty.

As stated prior, the game belongs to the brick breaker sub-genre. You control paddles (or ships) that are used to launch and bounce a single ball to and fro. The objective is to destroy all blocks on sight, using the ball as well as power-ups at your luck-determined disposal. A unique addition is the ‘Bouncer,’ a “weapons system” that releases a reflection of your paddle to impact with the ball in midair. As well as the multitude of power-ups including the classic laser shooter, the multi-ball spawn, and an overpowered ‘Heavy Ball’ that destroys anything in its path, the playing field gets more interesting with these special abilities.

You will also have to sometimes contend with ‘Scarabs,’ nasty flying bugs that will hone in on the paddle as you move it. If you get struck by one, your paddle gets temporarily shorter and slower. There are also boss fights that are sprinkled in throughout the campaign. These bosses seem like an afterthought — barely putting up a fight and having a flat alien design. The most exciting challenges come within the mission variety. Trickily-placed walls and revolving bricks will be the most notable jarring obstacles. I personally had a love-hate relationship with the fairness of such levels, but mostly love.

Some levels will require the controlling of four paddles. This is all done with the diagonal pad, analog sticks, or a combination of both. Other times, the game will take up Pong-esque vertical positions and then go back to the traditionally horizontal field of play. It all works fine, even if having to concurrently control four can get overwhelming. A glaring omission, however, is the ability to launch balls in a specific direction. Upon hitting ‘X,’ the ball can go in either direction, which really sucks when there is only one brick left or a sweet spot for trapping the ball. Besides that, the game is fair. Unlike most other similar titles, Twin Breaker gives a lot more leniency. You can hit the ball with the edges of your paddles and buy extra lives with accumulated points. These extra chances make the game a bit more forgiving and fun.

Going Back to Bits

As you can tell from the screenshots, the art style is similar to that of games of yesteryear, particularly of the ’90s. The graphics invoke a durable retro feel, and the backgrounds stand out mysterious and hypnotic. What I was impressed more by was the music. The composer is unbeknownst to me, but some of the chiptune songs are upbeat and catchy. I liked some more than others, though, with my favorites being ‘Strapping Young Scavengers’ and ‘Vaporware.’ Even though there are only twelve songs, I would skip to my favorite 8-bit tunes from the pause menu.

A Multitude of Modes

Done with the forty-level campaign? Well, how about a helping of a whopping six other modes? The modes are awesomely varied — from survival in ‘Marathon’ to wave-based action in ‘Shooter’ — adding a lot of replay value to those who love high score bragging rights. I just wish there was an online/split-screen implementation since everything you do is in a duo. Also, I would have liked to have seen a mode in the simple style of Arkanoid or Breakout. Sometimes it is good to go back to basics. Nevertheless, this is an excellent selection to choose from.

Despite some flaws, Twin Breaker: A Sacred Symbols Adventure is a sincere homage to an underrated sub-genre. It captures what made classics like Arkanoid and Breakout beloved while putting its own special spin on the formula. The result is brick-breaking bliss that I would recommend to most lovers of arcade indies.

You can buy Twin Breaker: A Sacred Symbols Adventure on PSN here.