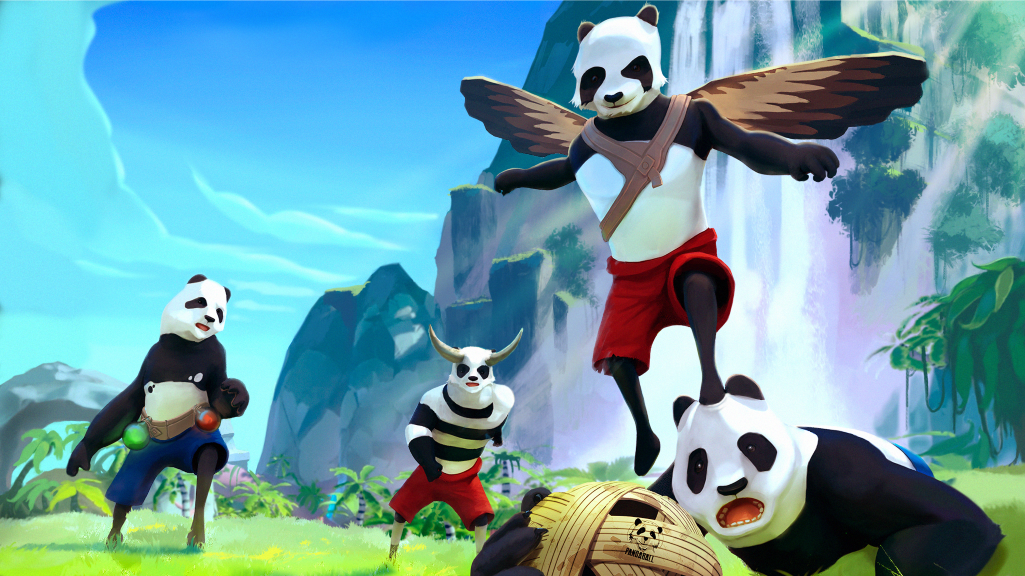 I have never been a big fan of soccer video games nor of the sport in general. Franchises like FIFA play it safe, sacrificing fun and creativity for stagnantly realistic gameplay. PandaBall takes a risk and shakes things up by letting you control pandas instead of people and offering more of an arcade-centric take on simulating the sport. The result is an offering of feverish fun and a dense set of modifiers that can dynamically change any match in a moment’s notice. While a lack of content and presentation sorely dampens the experience, this – – – pun intended – – – indepandant game is worth its low price.

Upon start-up, a menu appears with three options: multiplayer, training, and options. That’s it. You see no opening cutscene at all – – completely disregarding an ideal establishment of lore or mood. There is not much provided in the ‘presentation’ factor whatsoever. Tutorials explaining the controls are also nonexistent, with the most guidance coming from instruction screens showing button commands. A proper introduction would have been nice, but at least we can kick-off the essentials.

From the game’s overview , we can gather that Pamuria is an isolated and peaceful tropical island. With nothing to do and no danger about, anthropomorphic pandas have decided to create the titular sport. Pandaball is in a five-on-five format and plays out through two 3-minute matches. If the end of standard time ties a game, ‘golden goal’ becomes active for two minutes. This is a sudden death-type rule that crowns the player who scores a goal in that extra time. Golden goal has always been an intense form of competition, and I am glad that it is part of every stalemate situation.

A Couch Made of Bamboo?

‘Training’ gives a couple of sub-modes — Vs. A.I. or ‘The Road.’ The former is a quick match between you and an enemy CPU team of one of five difficulties. The latter is a tournament of sorts that pits you against four teams that become increasingly difficult. Developer GetAGame’s central intent is to bring back the local, couch-versus competition that has been missing from gaming. In the process of this noble goal, they neglected to include an online mode, perhaps due to budget constraints for servers. If you have no friends willing to play PandaBall, you are stuck with the unprioritized creative focus that is Training. I guess you could share play over PSN?

Depandant on a Tactful Team

You can customize the formation of your five-panda team to best suit your preferred approach. The goalkeeper, defender, attacker, and left and right midfielders are the positions presented. The sixteen different pandas to choose from all have different attributes and a unique quality if selected as a captain. For example, if you want to appoint “The Forceful One” panda as captain, your team will get a ‘Toughness’ attribute boost. The selection process works pretty well, although I wish the interface were a little more intuitive. The ability to compare stats or the addition of small text to indicate characters could have been added for more polished management.

Pandaball boasts a satisfying progression system, imbued with awesome incentives, including levels, costumes, and maps. A unique quest is included for each character, completing them unlocks a higher “item level,” which is basically a cosmetic. Each panda has four quests, and some tasks can be accomplished by the team as a whole, E.G., ‘win 50 matches.’ When the prerequisites are specific, however, progress begins to stall. This is because of the game’s almost top-down perspective — making it difficult to know what panda you are controlling at the needed time. Therefore, it is best not to track quests and simply play the game while mixing up your team with newly unlocked pandas.

PandaBall is played with unique controls. One of the four action buttons (triangle, circle, x, and square) executes a pass. Each of your field players has their own button assignment, which was kinda hard for me to see because of their tiny icons and dark blue color. Consequently, I often passed to the wrong teammate. If you do not slouch like me, you will have no problem playing at a closer distance.

R2 executes a sprint which consumes stamina. Holding either the L2 and R1 button/trigger while aiming a shot modifies the ball to shoot low or high. To actually aim, moving the right analog stick does the trick. When in defense, this stick executes a tackle instead. Finally, there is a special move called the “quickshot” which is achieved by flicking the right analog stick upon receiving a pass. The better the timing, the more effective the quickshot will be. You will know how well you timed the shot when something like “Perfect” appears above your panda. Quickshots are useful but hard to pull off, and you run the risk of temporarily stunning a player if you time one too early.

Each time the ball is kicked out of bounds, a mole will kindly throw one back in. Only this time, the ball is entirely different in its form and effects. These “balls” are bonkers for a kick-around and have their own positives and negatives. For example, a beehive gives three points per goal but terrorizes catchers. There is also the rock which gives two points and knocks out enemies but drains stamina quicker. Finally, a power ball confers more powerful shots and a bamboo ball bamboozles enemies with its lightness – – allowing for easy maneuvering and even long-range shots. Man, that mole sure sure does have an ace in the hole.

On the other paw, when you tackle an enemy, an unusual, enhancing item sometimes drops. These are powerups that can give you a boost of speed, stun immunity, multiplied points from goals, and even a chance to transform your opponent into a baby for a breeze attack (babality, anyone?). Finally, “delicious” bamboo can be dropped, luring peckish pandas to it like a bear to honey.

The powerups and balls add much-needed variety, helping it stand from the sports genre crowd. Coupled with the lovely Chinese folk songs, some lush environments, a vibrant color scheme, and different animations for each panda, soccer has never before been represented in such a superb style.

Bugs on the Ball! Eat them!

Unfortunately, some glitches need to be pointed out. Upon restarting matches, I am often greeted by my team running in never-ending inertia. This is a match-breaking bug that only stops when you quit the game or wait until half-time starts. A.I. CPUs also stink because they are either very stupid or very sharp on the harder difficulties. They will sometimes stop to a halt or be overcome with a penchant for superfluous passes and cheap goal shots. Also, some enemies can move during the pause-resume countdown. Hopefully, these issues will be patched, resulting in something as smooth as a bamboo pillow.

Not Endangered But Still Vulnerable

While a lack of content and online multiplayer bogs it down, this indie succeeds in delivering action-packed matches filled with delights and surprises. When considering its core purpose as a couch-versus revival, PandaBall’s fun factor is as black and white as its featured furry mammals.