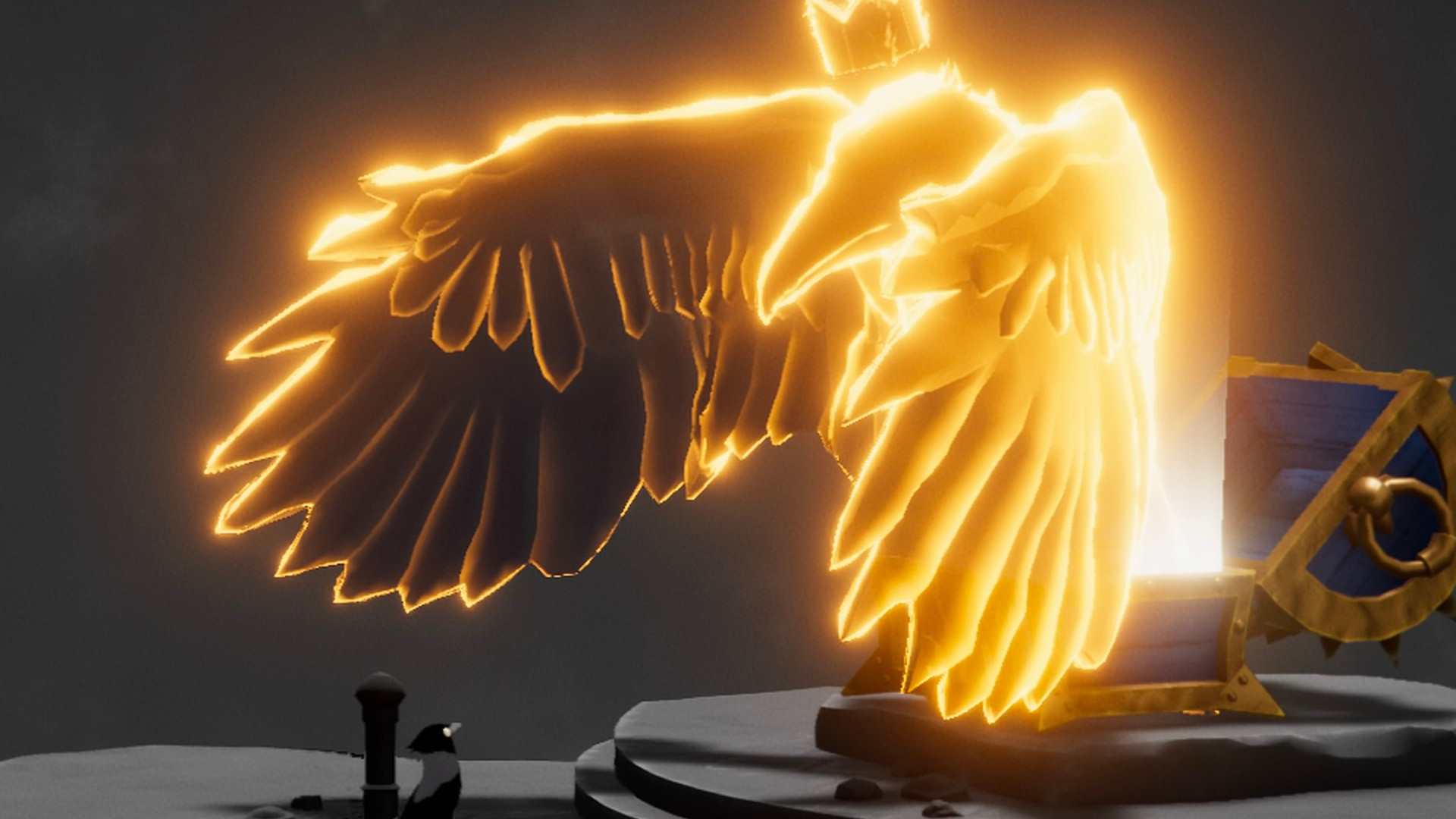 Death’s Door is a breath of fresh air for the action-adventure genre. With wonderfully creative aesthetics and satisfying combat, it’s the sort of game that compels you to play to the very end. Sure, the dungeons can get a bit overwhelming at times. Ultimately though, the charm and gratifying lite-RPG mechanics make this an adventure to remember.

In Death’s Door, you play as a small crow whose occupation lies in being a “Reaper,” one who harvests the souls of monsters who are cheating or denying death. You work for the Reaping Commission Headquarters, a dreary office in a black-and-white realm, acting as the game’s hub world. After successfully completing a job by killing a monster, its soul is then stolen from you by a mysterious giant crow. Since all crows who fail to turn in their assignments become mortal, this means bad news for you. However, he offers a mutually beneficial proposition — seek out three “Giant Souls,” creatures who have cheated death for a long time and have since become mad with power. You’ll step foot in their respective lands, all the while uncovering a conspiracy involving the Commission and its employees.

It’s a creative premise that covers themes ranging from bureaucratic corruption to the sin of avarice. Sure, you can’t completely take it seriously, what-with you playing as a cute crow who meets a bunch of eccentrically lively characters. Though the game has a charmingly light tone, it does try to mix in poignant moments. As such, the villains in this game are sympathetic and have understandable motivations. First, you could be talking to a guy with a pot on his head who makes puns, but then you could hear a somber eulogy an hour later. It’s this tonal balance, alongside its endearing cast of characters and intriguing setting, that sets it apart from other fantasy indie titles.

The Legend Of Souls

The game is played from an isometric perspective and follows a formula mixing The Legend of Zelda and Dark Souls. On the Zelda-ish side, you unlock new weapons and magic spells as you progress, and they are later used to solve puzzles and unlock new rooms in dungeons. Thankfully, the puzzles are straightforward because they usually require speed or precision (IE lighting torches in quick succession.) The dungeons are familiar in other ways. They need four Souls to unlock a door that leads to obtaining a new ability. In terms of level design, dungeons are sometimes labyrinthian without a map. Still, they aren’t as bad as other Zelda-inspired games. I also didn’t like how the game becomes somewhat of a bullet hell in rooms leading up to bosses as superfluous hordes of enemies descend upon you. Besides these occasional moments of frustration, the dungeons are fun to navigate.

One of the Soulslike elements comes in the form of currency earned from killing enemies, which can then be used to upgrade your stats at the Soul Vault. This is in the hub, which you can go back to at any time by activating and entering bonfire-esque doors. I wish the checkpoints acted more like bonfires because you can only restore your health by planting seeds in pots that appear throughout your adventure. If I ever want to teleport back and regain health, I just exit to the title screen and load a save. Still, the game is a lot more forgiving in that you don’t lose any Souls upon death, making things a lot more enjoyable. As for the actual combat, it’s simple but punchy. The ragdolls on enemies are satisfying. You can actively sense enemies’ health not through a health bar but, rather, through visible physical damage. Empowering fun.

You can discover four weapons, each with unique properties like damage and range. These can accommodate any style, from the swift but weak Rogue Daggers to the burly but slow Thunder Hammer. There are also four projectile-based attacks essential to beating the game, all of which consume mana. Speaking of which, you can replenish your magic by destroying objects in the environment or hitting enemies, which is good for anyone who favors ranged battles. There are also hidden mini-bosses which, when beaten, give an upgrade to a respective spell. The other boss battles are also a blast, with challenging attack patterns that test everything you know about the game. You can also increase your magic capacity and your HP by finding Shrines (16 in total). Alongside the satisfaction of gathering souls, there is a nice flow to this progression.

You can also find things called “Shiny Objects,” various trinkets that provide fascinating lore. Three of these are required to unlock the True Ending of the game, which itself requires many more post-game steps. As such, everything story-related can be accomplished in up to 12 hours. Sure, there is not a lot of playtime (and a new game+ mode would’ve been nice), but it is excellent value-for-money being the quality $20 game that it is.

Death’s Door is a game brimming with imagination. The atmosphere is downbeat but full of fantastical wonder, made possible by the original character designs and believable environments. One standout example is a level that takes place in a witch’s manor, where this villain and her family’s history is beautifully communicated through furnishings and a sense of the home being lived in. You will also be attacked by inanimate objects, such as pots made sentient by her spells. As you hit them, they will break apart and reveal their true selves underneath. The lore, enemy design, and environments coalesce in other areas, too, forming an incredible sense of immersion.

There are also the animations, aesthetics, and music. Sure, there is no voice acting, but the characters’ convey a lot through expressive movements. The game also sports a stylized look, which could have steadily fallen in the trappings of looking like another Unity engine indie game. But no, the lack of detail and clean look of the game fits it well, lending to a pleasing look. Finally, the soundtrack is replete with lush piano notes and high-octane orchestral pieces that really help give a fine finish to the game’s identity. It’s a world of ruinous wonder, subtle sobriety, and hope amidst hidden corruption.

Go On, Enter Through

Death’s Door is an excellent action-adventure gem, balancing solemnity with laughs and moderate difficulty alongside forgiving mechanics. Its combat is pure and satisfying, and the light-RPG elements make progression enjoyable. What I admired most, though, is how all of these elements work in tandem as Death’s Door offers an adventure that feels fresh. From the exquisite environments and discoverable upgrades/collectibles to the delightful characters, you won’t wanna miss out.

You can buy Death’s Door cross-platform on PSN here.