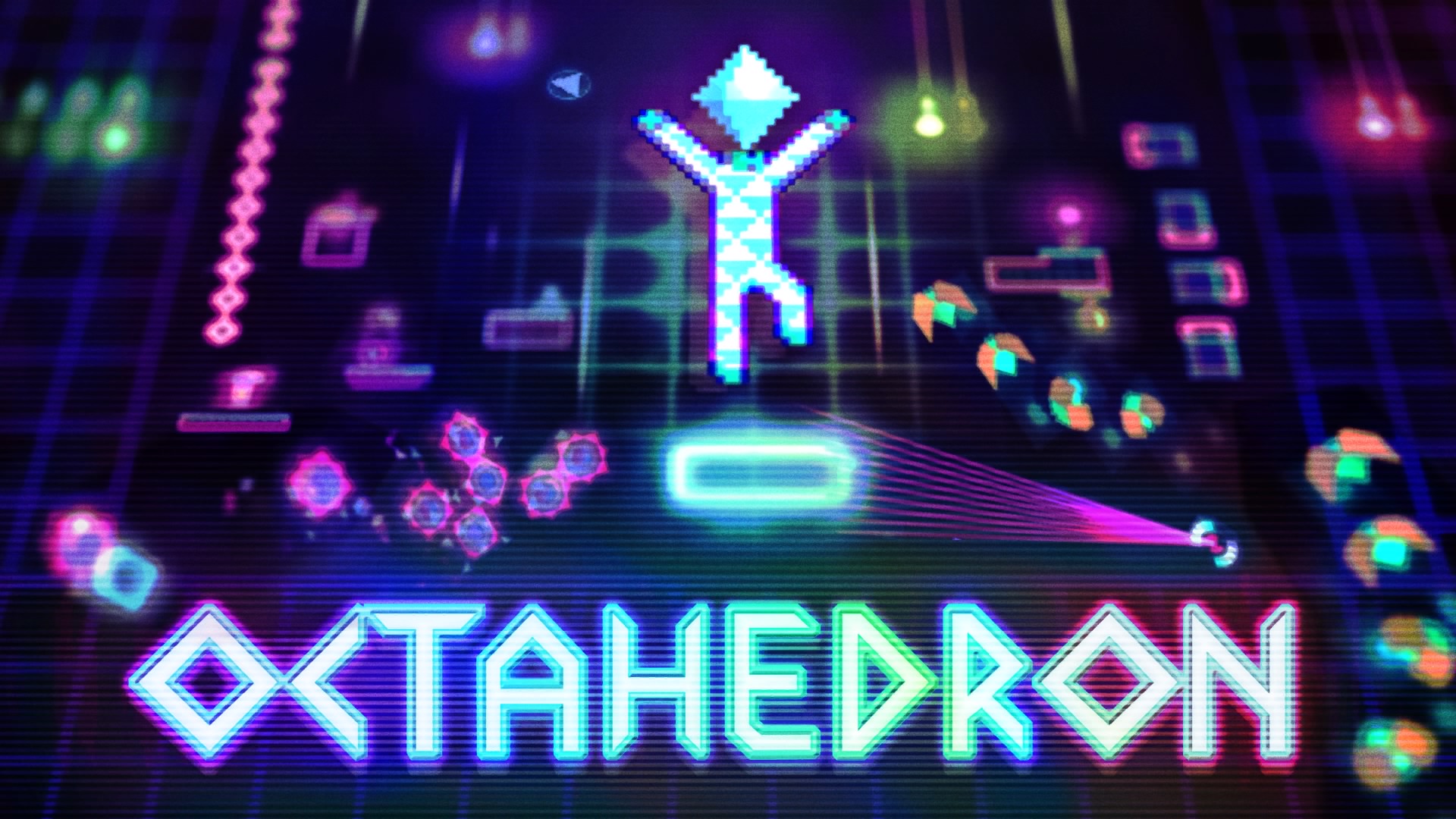 Back in 2016, Square Enix launched a new branch aimed at working with indie developers on upcoming titles. Known as the Square Enix Collective, the goal was to help talented, underexposed studios make a name for themselves by working with one of the biggest developers and publishers in the industry. Demimonde’s new vertical platformer, Octahedron, is the Collective’s latest successful collaboration, boasting some of the most imaginative platforming I’ve seen in a long time.

Our journey begins in a cabin in the woods as a lone man forages for kindling. Happening upon an odd, glowing eight-sided gem, he is soon sucked down a pit and into a mysterious realm, transformed into the titular Octahedron, a man with a 3D diamond for a head. Now begins the long climb back to the real world with nothing but a magic board, some psychedelic visuals, and a killer soundtrack to guide us.

Gameplay in Octahedron revolves around your ability to summon platforms under your feet at will, which you can then surf around on much like Marty McFly’s favorite hoverboard to bridge gaps in the various levels. Each platform, or board, only lasts about three seconds before disappearing, requiring you to either jump to stable ground or create a new one. The number of platforms you can summon in sequence without touching solid ground changes by level, from as few as 2 to as many as 50. As you climb you’ll collect various gems and polygons that affect your score and progression, using your board to smash through and/or reach them in out of the way places. These are mostly optional, and the difficulty in obtaining them can vary wildly, but it’s worth it to go after as many as you can.

Standing in your way is a creative assembly of enemies, traps and pitfalls, ranging from neon colored frogs to electrified walls to vacuum jets that will suck you across the level, pulling your board out from underneath your feet while you fall to your death.

Turn Up the Beat

The further you climb in Octahedron, the more powerful you become, by way of your board. In the beginning you are relatively powerless and must avoid enemies at all costs, as you can only take a handful of hits before dying and have limited lives per level. The upgrades you receive not only allow you to transform the world around you by activating switches or charging batteries, they also give you some offensive options. Bombs can change the state of various switches, transforming a level’s configuration, while lasers can charge batteries or just fry any foes unlucky enough to be underneath you. Each upgrade you receive replaces your previous one, forcing you to come to terms with your new abilities quickly rather than rely on old tricks. You always keep your default, powerless board, and can switch between it at any time. Which of your boards you use at any given time becomes an integral part of the gameplay, as some enemies and objects react negatively to attacks.

What makes Octahedron stand out is how all these components are combined with the game’s audio-visual aesthetic to present what can be a seamlessly fluid experience. Each level pulses with the game’s original trance soundtrack as all the different colors in the visible spectrum ebb and flow in concert, creating harmonious, almost zen-like feel. Even the enemies and traps move with this rhythm, changing their behavior or appearance based on the tempo of the music. The result is surreal, something that feels organic and natural and impossible all at once, like a lucid dream turned up to 11.

Because everything is so dependent on the musical tracks for each level, I was worried that things would quickly become repetitive, a concern which Octahedron smartly side steps by ensuring that the core gameplay is flexible enough to handle a wide range of play and then tailoring the rest around the music itself, rather than trying to shoehorn mechanics into pre-selected tracks.

If there’s any flaw to this system it is that it doesn’t really require you to master your surroundings, even though the game is most certainly at its best when you do. The overall difficulty can vary a good bit from level to level, and when things got particularly rough I was able to simply avoid the more challenging parts and make straight for the end, even if it did feel rather disappointing to do so. Part of me wishes that Demimonde had insisted on more precision from its players, but I can see the argument in trying to make things more accessible, as well. I know that I’m looking forward to revisiting those levels which I never completed to my satisfaction, and the quality of music and presentation certainly makes that likely to happen sooner rather than later.

It’s been a fun ride over the past decade, watching the indie scene slowly develop and blossom on PC and then, in the last five years, explode onto the various consoles. Indie games have shown the value of smaller studios making unique games beholden only to their vision and not the economic constraints of AAA development, and Demimonde’s Octahedron now stands shoulder to shoulder with the best of them, thanks to an amazing soundtrack, creative level design and presentation, and singular vision.