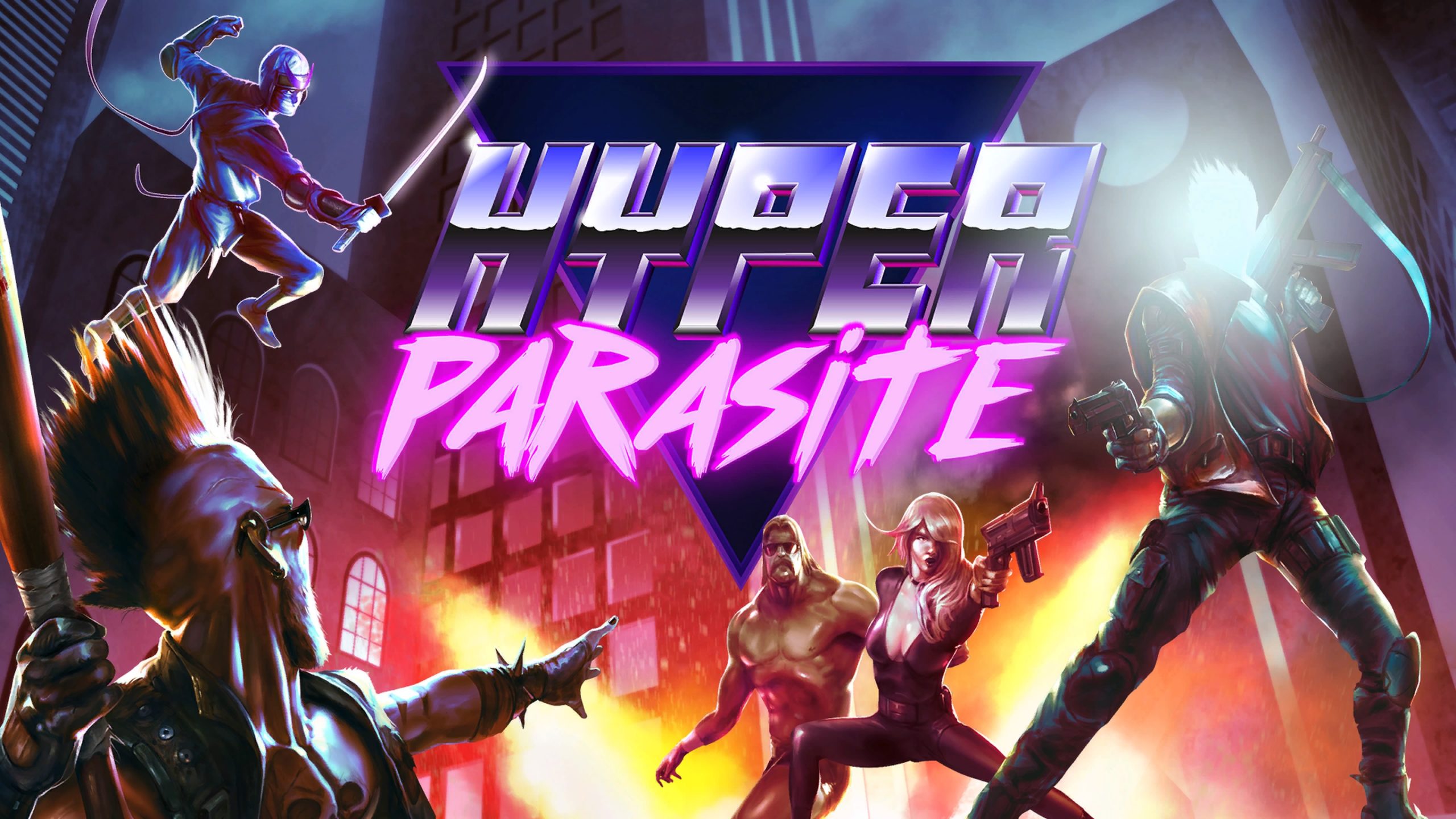 Ah, the 1980s. It’s legacy has been vividly instilled and even propelled into fabled legend. We mystically reminisce the decade’s pop culture pantheon as a neon-drenched wonderland replete with action heroes and electronic music. HyperParasite is an unabashed love letter to ’80s. Crushingly challenging, satisfyingly gory, and positively modish, this is an indie that will suck away your soul while leaving you wanting more after each narrow victory.

Man is the Warmest Place to Hide

You play as a blob of slime seeking to, for some malevolent reason, use humanity’s nuclear weapons against itself. The eye patch wearing ‘Mr. President’ has declared martial law and ordered the whole country to “join in on the hunt.” What this means is that everyone — from cops to ninjas — is out to destroy the gooey alien. It is a delightful setup that revels in its absurdity and never takes itself too seriously.

This exposition of every kind of military man, combat officer, common thug, and martial artist against the player leads to HyperParasite’s incredible concept: ‘Snatching.’ You can assimilate and control any one of the stupendous cast of sixty characters, allowing you to use their individually unique skills and fighting styles. And as most pithily put by a hint message, “[Y]our enemies are your extra lives.” Switching to different character classes on-the-spot while in combat is an essential part of the gameplay loop. Once your host dies, you are back to a vulnerable state. The parasite’s original form is always subject to a one-hit death.

Played from a top-down perspective, this is a roguelike in its purest form. With permadeath, you start back from the beginning of HyperParasite, no matter the progress made. Unfortunately, the only thing that carries over in each run is the characters bought with money. You can obtain coins by destroying the environment and, occasionally, from enemies. They can then be spent in the shop run by Wix, a shady female alien dealer who looks like a middle-aged bald man. Considering the steep prices of upgrades, money is scarce and parsimoniously rewarded. You will probably want to focus on unlocking characters to assimilate — ultimately avoiding upgrades for your first several playthroughs.

I wish there were RPG elements; to upgrade your characters permanently (in the vein of Rogue Legacy.) Alas, all classes start over with their default stats after you lose. Stat boosts themselves are similarly scarce throughout levels — with only a couple popping up when luck favors. Here, you can make a single enhancement to HP or damage, or even sometimes choose an extra life for when your original parasitic form takes a hit. Another pivotal thing to look out for is a little icon above an unknown enemy’s head to indicate that they will drop a brain — something you can take to the shop to make them available for purchase. Then, once purchased, you can consume those enemies once they appear. It is highly satisfying to aim towards complete the character collection.

As earlier mentioned, everyone in the country is on the prowl for you. Everybody from all walks of life and culture wants to see the parasite blown, shot, pummeled, and all other methods of inflicting harm. Every character has two unique attacks — one is standard, and the other is a special cool-down move. Attacks can range accordingly if the role is a ranged or melee. Maybe you are an ax-wielding fireman or a flame-spewing pyromaniac.  All types are balanced — some being more agile but weaker and others slower but stronger. Either way, you will have to adapt to these multifarious playstyles to consume enemies on the fly. The attention given to diversifying these characters’ attacks and personalities is incredible.

Spread over five acts (or levels) you will be fighting your way across urban locales like an industrial district, a downtown, or ‘Asiatown,’ to name the first few. In each level are separate areas which can only be accessed with purchasable keys or hidden items. In ‘Downtown,’ for instance, there are sewers that yield surprises and extra upgrades. Going to these additional areas is wise because you can find more money and level-up points before heading over to fight a main boss of the respective act. Because this is a roguelike, areas are procedurally generated, and there are randomized side-bosses to fight as well. Bosses in HyperParasite implement bullet hell-like elements and can last a good ten minutes each, so be prepared to dodge persistently.

HyperParasite wears its 80s-inspired visuals on its multicolored shell suit sleeves. The portrait designs are well-designed — paying homage to characters from all realms of 80s pop culture. What I am a real sucker for is it’s in-game graphics, especially the models and lighting. Vivid shades of hot pink and weird deep blues permeate the locales with splendid results. There is also a pixelated quality to the visuals that are in line with something like GTA: Chinatown Wars. It all makes for a nice-looking game.

There is also the soundtrack to speak of. Like Hotline Miami before it, the music plays an integral part in establishing the mood and capturing that ’80s feel. The synthwave tracks on showcase here are penetrating — punctuating the combat with flair. Composers Joe Kataldo and Van Reeves did a magnificent job.

HyperParasite is a frenetic, fast-paced roguelike that is not for the faint of a casual’s heart. Its uncompromising action keeps you on a razor’s edge, and the sixty characters ensure every playthrough is not the same. But most importantly, it is a pitch-perfect love letter to the 1980s. Now, terror has no shape.

You can buy HyperParasite on PSN here.