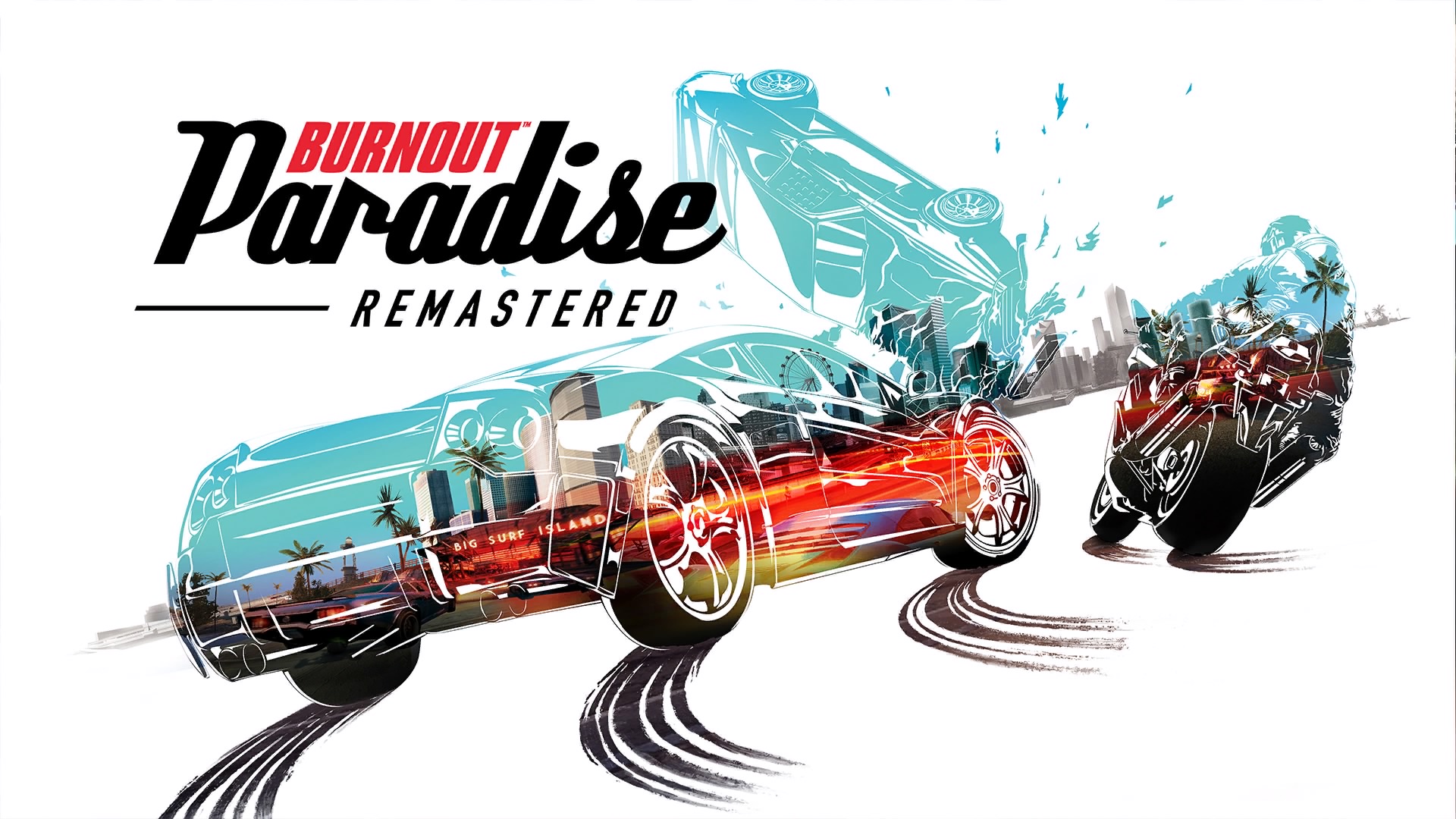 There are several Great Debates in modern pop culture that will never end because there is no possible definitive answer. Star Wars or Star Trek? Batman or Superman? Ferrari or Porsche? Somewhat less ubiquitous but just as fiercely debated: Burnout 3 or Burnout Paradise? Both games have their die hard fans as well as stubborn detractors, and having sunk well over 150 hours into the PC version of Burnout Paradise, I know exactly where I stand on this important issue.

No matter where you fall on this debate, racing fans everywhere should be happy today, as Burnout Paradise makes its way to the current generation with a remaster that, much like many of the game’s iconic vehicles, has more going on under the hood than you might initially suspect.

A Fresh Coat of Paint

First and most obvious of Burnout Paradise’s upgrades is the new layer of visual polish. While the original assets are still being used, this is more than just a simple upscaling job. 4K support is nice but means little without some accompanying touches, which Burnout Paradise can boast, such as improved anti-aliasing, better soft lighting and corrected ambient occlusion. The improved AO settings are the real hero, here, as the original game had some serious visual jank in the background thanks to busted occlusion.

Even better news for console players is the bump up to 60fps gameplay. For a game so reliant on the perception of speed and danger, Paradise’s locked 30fps on PS3 and 360 was kind of a letdown, even if it was par for the course back then. PC players fared better with unlocked frame rates, but the consoles’ new 60fps gameplay matched with the graphical overhaul is a combination that just can’t be beat. The final product is something that feels far more refined, delivering a greater sense of the barely controlled chaos that Burnout is known for.

Stunts, Races and Rages, Oh My!

While the game looks much nicer and the gameplay is more fluid, the underlying structure of the Paradise City is entirely unchanged. There are 120 events dotting the city, one at each traffic light. Your options range from standard races to the more popular road rage events, where your goal is simply to demolish as many other racers as you can in a limited amount of time. Stunt runs will send you all over the map looking for the biggest jumps and most smashable objects, with more insane feats offering bigger score multipliers. Marked Man (in which you race to the finish while super powered armored cars try to take you down) also returns, though I’m pretty sure nobody asked for it; thankfully there are still fewer of those events than anything else.

Paradise Remastered features all the various gameplay tweaks that were patched in over the years, such as intersecting street signs functioning like turn signals to indicate which direction you should turn if you’re looking for the quickest paved route. However, your personal knowledge of the city is the real key to victory as there are back alleys, jumps, ramps, tunnels and train tracks everywhere just waiting to be used as a shortcut. You can beat most racing events in the game by sticking to roads and racing smart, but that’s boring. I may as well take my Honda Pilot to the race track.

No, Burnout Paradise is a game that’s all about vicious speed and brutal violence. No matter which event you start, your goal will be the destruction of everyone who gets in your path, either through speed, brute force or preferably both. This formula has been a staple of the Burnout series since its inception, but it reaches a fever pitch in Paradise that has yet to be topped by any installment from any racing franchise.

In addition to providing all the DLC cars from the original game, several of which are unlocked from the beginning, Paradise Remastered also includes Big Surf Island, a console-only DLC map roughly the same size as downtown Paradise City, only more densely packed with insane aerial shenanigans at your fingertips. Having never played this part of the game before, I spent a considerable amount of time in Big Surf these past few days, and even after completing every event I still feel like I’ve barely scratched the surface of what Big Surf has to offer.

Big Surf also comes with unique racing rules and events to account for its enclosed space. One of the best things about Burnout Paradise is that events can, and sometimes will, take you anywhere and everywhere in the city, with no limitations whatsoever. You don’t have that sort of room on Big Surf Island, and so races here are about hitting checkpoints rather than just finding your own way to the finish line. How you get to those checkpoints is entirely up to you, whether you want to stick to roads or drive across a parking lot roof and fly through a giant donut statue; It’s kind of like the Forza Horizon series, only with more options for crazy, high flying solutions.

Showtime at the Yacht Club

If you ever get tired of the usual events littered around the city, Paradise’s Showtime mode lets you turn any and every inch of the city into your own personal, explosive playground. At any point, before or after crashing in the game, it is possible to initiate Showtime by tapping L1 and R1 simultaneously, turning your car into 3,000lbs of physics-defying fireworks. You’ll use your remaining boost to propel your car into oncoming vehicles, each of which has a dollar value assigned to their destruction. Buses and other special vehicles count as score multipliers that work almost exactly like the multipliers in stunt runs.

Much like the game’s freeform racing structure, it’s wonderful that Showtime is so fluidly integrated into the rest of the game, such that you never have to venture into any menu to start up an event or turn your car into a weapon of mass property destruction.

Less fluid, however, is the game’s still sloppy and slow interface. On the rare occasion that you do need to visit the game’s many menus, navigating between them still feels like trying to flip through the pages of a book with glue on your fingertips, with slow response times and a genuine sense of messy disorganization. The map menu is useful as a quick reference to get a sense of where you generally are in the city, but you still cannot set custom waypoints, you still can’t zoom in on specific sectors, and you’re really never given enough information about where you’ve been and where you still might want to go. Paradise City is more than just a collection of racing events, it is a huge map full of secrets, collectibles, and easter eggs, and EA makes it impossible to keep track of where you have and haven’t searched. As a tool, it is largely useless.

Worse, still, is visiting your junk yards to select a different car. The process by which you scroll through and make selections is still painfully slow, and while that may have been a legitimate byproduct of system limitations back in 2008, as a way to mask loading times, it’s really inexcusable on newer, much more powerful hardware. It’s especially annoying when you’ve unlocked several new cars since your last visit, and you have to sit there while the game slowly, deliberately loads up each and every one, making you pause for 5-10 seconds each time.

Ask Any Racer, Any Real Racer

For a long time Electronic Arts has been a hard pass on remasters of any kind. Burnout Paradise was their first effort, and while it features some key improvements and offers a more complete package than players have ever previously gotten, it’s still got a lot of rough edges, as to be expected. That said, it still remains one of the best pure arcade racers ever made, with a still-unparalleled sense of speed and classic Burnout destruction. On the strength of its gameplay, combined with the general lack of racing games for PS4, it’s also now the best game in the genre that you can own on this platform, if barely. Of course, we all know that it doesn’t matter whether you win by an inch or a mile; winning is winning.