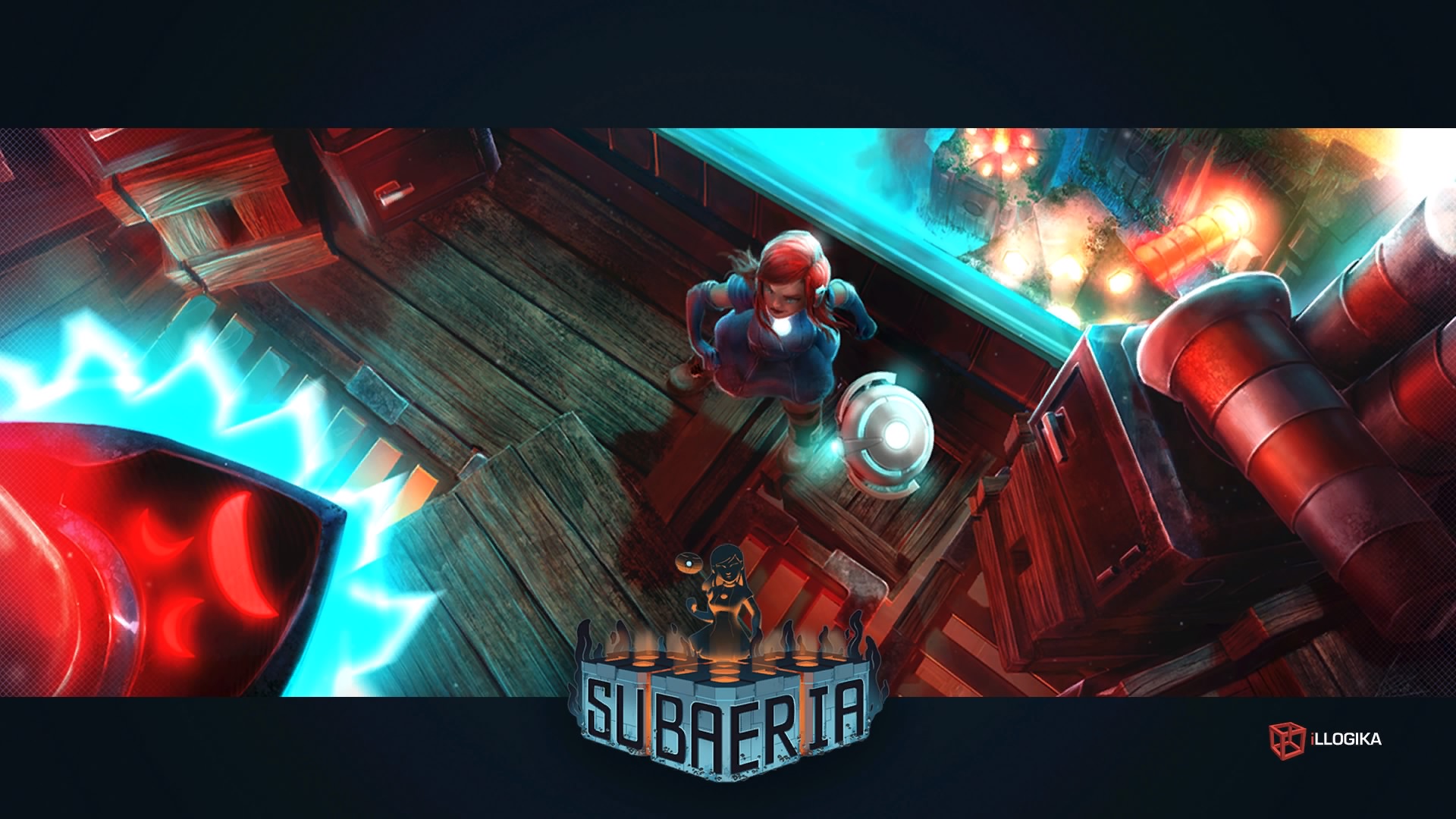 Subaeria has a lot going for it. I really wanted to like this game. The locale is interesting and it tries some new concepts with the genre. Without a doubt, the game is fun and definitely unique. Unfortunately Subaeria falls short of being a great game thanks to some early repetitiveness and missing that rogue-lite sweet spot.

You play as Styx, a young girl who lives in an underwater because global warming has turned earth into one giant ocean. There’s probably some sort of message here but it’s pretty glossed over. Anyway, Styx and her friends are playing a VR game and in order to continue playing they need more credits. Going against the advice of her friends, Styx cheats to get more credits so they can play more. Unfortunately she gets busted and the (very harsh) punishment is for her and her family to be cleansed. In other words, killed. Yeah, that accelerated rather quickly.

After returning home she finds her parents dead and the Cleaners are in pursuit of her. This is where you take over. After a extremely brief tutorial you’re on your way to take down the dictator President Dorf who is running the place quite cruelly. All while trying to avoid being cleansed yourself.

STYX AND HER DRONE

The game mechanics are are fairly simple and easy to understand. Mastering them, on the other hand, takes a bit of finesse. You control Styx with the left stick and her drone with the right. This use of each stick to control what is essentially two separate characters takes some getting used to. But after you get the hang of it Styx and her drone can become quite the team.

As you explore the environment you’ll find apps that can be attached to your drone. These apps can do a variety of different things. One allows you take direct control over a cleaner for a short amount of time. Another leaves copy of Styx to distract the cleaners. And there are several other types of apps that you will earn as you play through the game.

When you die (which you’ll do a lot) you get to see the apps you found in the map. These new apps will then show up randomly in the map on new play-throughs. As you unlock apps, they make the game that much more interesting and random.

The game has an overhead view which makes one of Styx’s abilities a little awkward; jumping. While jumping can be useful for dodging Cleaners and adds some verticality to the rooms, it can be difficult to judge what you can jump on and what you can’t. Again, until you get used to it. There were several times I found myself stuck between a crate and a cleaner because I thought I could clear it.

All in all Subaeria has a bit of a learning curve. I think a more thorough tutorial could help a bit here. Especially when it comes to using the apps. As I mentioned though, eventually you do get the hang of things when you give it a chance.

One aspect that Subaeria really has going for it is the interesting take on fighting the enemy. Unlike most games you don’t fight directly. Instead, you use your drone and its various apps, the environment, and other Cleaners to do the fighting for you. It’s a clever take on the genre that I found refreshing and it gives you plenty of options to get through the game.

Each room comes with a number of Cleaners that need to be taken care of before you can move to the next room. The Cleaners come in different sizes, forms, and colors which all factor into how you are going to deal with them. Because of this each room is like a small puzzle that can be solved in various ways. Let’s take a look at a simple example.

You walk into a room with two Cleaners, one that’s yellow and has a saw blade and another that’s blue and shoots at you. There are also lasers around the room with both of those colors as well (blue destroys yellow, etc). This is where you have several options on how to clear the room. You could lead the saw blade to hit the blue one (they chase after you). Or you could lead them both into the opposite colored lasers. Or you could use an app on your drone to take over one Cleaner and use it to battle the other. Or another app could be used to literally push a Cleaner into the lasers. You have a wide variety of ways to get through each area which makes the gameplay new and interesting. Unfortunately this variety isn’t quite enough.

HAVEN’T I BEEN HERE BEFORE?

As with most rogue like games, Subaeria is randomly generated for each play-through. Unfortunately, this is one aspect of the game that kind of fell through. There is a really small set of rooms for the game to use. These rooms are rearranged in random order for each play-through. It doesn’t take long at all to start seeing the same rooms with the same layouts and the same puzzles.

As with any rogue-lite, when you die you start the game anew. In death you still progress as a character. The progression is made from earning different apps and whatnot after the game is over. Then you get back into the action to make it a little further and try to earn more rewards. Rinse and repeat.

Because of the small number of variations it doesn’t take long to know all the rooms. In fact you’ll see some of the same rooms on just your second play. The room will only be in a different part of the map.

The bosses at the end of each “level” of the game are even less random. There are plenty of interesting bosses but they are always in the same level. And when you die you’ll have to work through the same bosses. That’s not to say that boss battles aren’t fun though. They can get pretty chaotic at times and strategy is definitely key with these things. You’ll also need a little bit of luck in that hopefully you were able to find apps that work well beforehand. But after you have to play the same bosses so many times it starts to drag a bit.

This isn’t a game breaking thing though. The game is pretty fun and unique. But part of what makes other rogue-lite games fun is the satisfying loops. You start from the beginning work your way as far as you can and gain loot or progression. Then do it all over again. Unfortunately Subaeria doesn’t have enough variation and just slightly misses that sweet spot that most games of this genre are known for.

IT LOOKS GREAT, THOUGH

The game does look really good though. The colors are distinct and make the game stand out. Details in the environment are interesting to look at even if you don’t interact with a lot of it. One detail I appreciated was the scratch marks in the floor from the patrols paths of the Cleaners.

The Cleaners themselves are all pretty distinct as well. You can immediately tell what kind of Cleaner you’re up against at a glance which helps in formulating a plan to deal with them.

The environment told a bit of the backstory as well and the type of life these people lived in. I like when the background can tell as much about the game as the story beats themselves. I think it helps build the world your playing in. Even if it gets a little old after seeing it so many times.

The music and sound is good as well. Right away I noticed the catchy music that added to the futuristic vibe of the game. The sound of the Cleaners also help in identifying them and what they are about to do. Explosions and environmental sounds are all very satisfying.

As I said at the beginning, Subaeria has a lot going for it. The elements are there for an entertaining rogue-lite game. It has an interesting fighting system, more or less interesting characters, and a neat world. But it’s all brought down by a repetitiveness that kicks in way too early. So much so that I would wager most people are not going to give it enough time to get really far into the game. Which is unfortunate. Subaeria is a fun game that just misses the mark. There is a lot of potential here and I have to give the developers kudos for their creativity. It might be worth a play if only just to try something a little different in a world that is getting pretty watered down with rogue-like games.