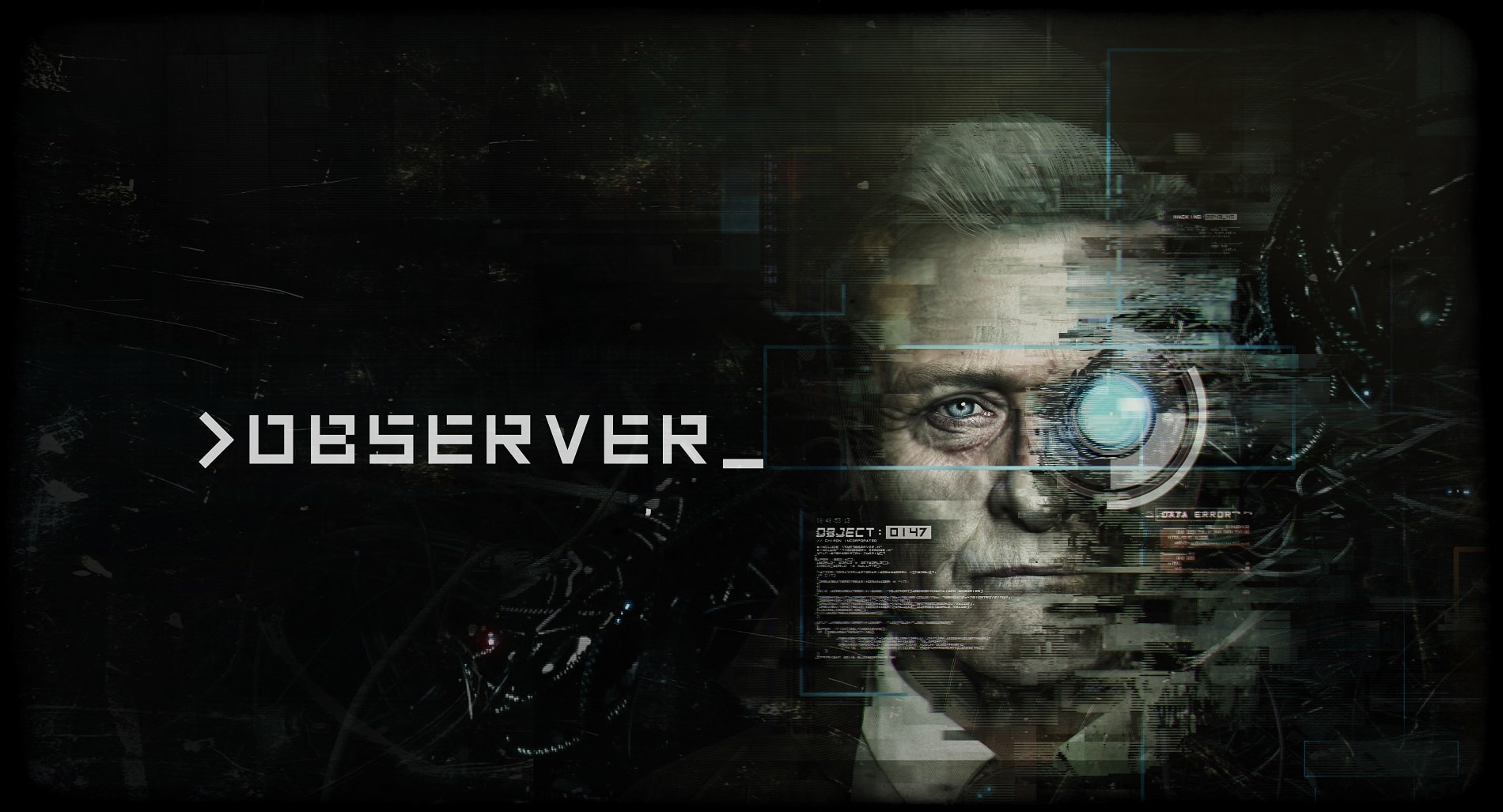 Observer is a huge improvement from developer Bloober Team’s last horror game Layers of Fear. Observer is a wild ride similar to Layers of Fear but with a lot more substance. It seems that if you are a person who is into atmospheric/psychological horror games these guys are definitely the place to go. They are getting good at horror.

Observer is set in the futuristic cyberpunk world (very much like Blade Runner) that is really well done visually and draws you in right away. It sets it’s hooks in you and doesn’t let go until the credits roll. It’s only marred by the occasional bug and some areas that aren’t entirely clear on what to do next. Otherwise, if you’re into atmospheric horror games, Observer will be a real treat.

In the not so distant future

The game takes place in Poland in 2084. Mankind has recently survived a plague called the Nanophage which was followed shortly after by a war. As a result Observer is set in a dystopian world full of people that have turned to using drugs, tech enhancements and virtual reality to cope.

All this history is relayed mostly through dialog with some of the other tenants. All of which have unique personalities. You’ll also read some emails and other files, which altogether relay a much bigger world outside of the apartment complex you happen to be stuck in.

You play as a neural detective, Daniel Lazarski, who has the ability to enter people’s thoughts (quite literally) to solve crimes. Voiced by Rutger Hauer, which funnily enough starred in Blade Runner, Daniel has a husky old voice vibe that is both friendly and stern. For the most part Rutger’s performance is well done but at other times it almost seems like his performance slips into a different character altogether and is a bit distracting. But it works.

Detecting we will go!

The story starts with a troubling call from Daniel’s son. Which brings Daniel to a rundown apartment complex specifically made for the the aforementioned people trying to survive the world. In the apartment, you’ll be doing a lot of detective work including talking to other people in the building and using some of your own implants to solve the mystery.

This game takes it’s detective aspect pretty seriously. You’ll have to do some actual investigating to figure out what’s going on and move the story along. I found this to be an interesting and engaging way to play a horror game. This also plays into the story itself. The gameplay and story are very intertwined which makes it all that much more engrossing.

The implants Daniel have give you a few abilities to help investigate. One is Electromagnetic Vision, which helps you find electronic objects. The other is Bio Vision which allows you to see organic materials such as blood. A quick click of the L1 or R1 button switches your vision to one of these abilities. It changes how everything looks and makes whichever particular material (electronic or biological) stick out so that you can discover clues. Think the vision shots from the Predator movies where it can see body heat and you’ll get the idea.

The other portion of the game takes place inside people’s minds. As a neural detective you have the ability to literally tap into a person’s brain using what is called a Dream Eater. This is where the game gets very surreal. You’ll be going to through environments that are reminiscent of recent events mixed with that particular persons memories and their own personal fears. It’s all very strange and moody and it’s also where a lot of the story unfolds as the people you jack into are directly involved in your investigation.

It’s all a bit difficult to explain without giving too much away. I’ll just say that these are the highlights of the game. There are quite a few segments that stuck themselves in my head for awhile after playing. It’s very surreal in a very good way.

What a filthy cyberpunk mess!

The graphics themselves are good but not top of the line like Horizon. We’ll say they are satisfactory. The thing that really works though is the way the environments are designed. For example, the apartment complex itself feels very rundown because of all the crap that is everywhere and the parts of the building that are falling apart. I keep saying rundown but that’s the best way to put it. It’s very realistic in that it looks like a lot of people live there and it feels like a sketchy part of the city.

Being a cyberpunk game, the environments have an 80’s futuristic style. You’ll see a lot of cassette tapes, old computers, and grainy video feeds scattered throughout the game. And there wires everywhere. Literally. Parts of the apartment reminded me of The Matrix. The overall look is very complimentary to the cyberpunk vibe.

When you are inside someone’s mind, it’s very much like a dream. As I mentioned the environment is a mix of real world places (i.e. the apartmetnt) and dreamscapes and it all looks very convincing and creepy. Just like dreams everything is always in flux and changing when you least expect.

Part of what makes a really good horror game is the sound design and Observer succeeds very well here. Music is well done and appropriate but where the game really shines is in the sound design. There is a ton of electronic noises in this game thanks to the aforementioned cyberpunk environment. They all sound really good. Voice acting is also really well done for the most part. The combination of well done environment, visuals, and sound are what makes this game shine. It’s an aesthetic that really adds to the atmospher of the game both in the apartment and the minds of people.

A forewarning, this game is pretty loud and will startle you at times. There are a lot of jump scares included with the atmosphere but I didn’t feel like it was overdone like it was in Layers of Fear.

Controlling Daniel is typical of your first person horror game. There isn’t anything special here but it works for what it needs to do. Button layout is slightly different then you might be used to though.

The use or check button is mapped to R2 which, in my experience, is slightly different than other games of a similar style. I got used to it pretty quick and it wasn’t a big deal until I went to play a different game and tried using that button to check something. Not a deal breaker by any means, just something to note. Otherwise controls worked as expected.

I suppose you’re probably wondering where the horror comes in. This isn’t your typical horror in several ways. It’s a bit like a walking simulator and is made creepy more by the atmosphere then any kind of survival. There are some segments in the game where there is danger but for the most part it’s all about the creepy vibe throughout the game. In fact the developers have coined the term “hidden horror” for a genre. It’s more about psychological scare tactics and atmosphere then survival.

The world itself is very fleshed out and you really feel like this time period is pretty rough for people in general. As mentioned before many people have turned to drugs and biomechanical enhancements in an attempt to deal with this dystopian world. That might sound cool but is more often grotesque and even sad at times.

On top of that, the segments within the minds of some of these people are very intense and even disorienting. Couple that with the sound design and you have a game that crawls under your skin without you even realizing it.

I really enjoyed Layers of Fear but it’s one weakness is that it used the same tactics to scare you throughout the game and that eventually got old. With Observer, they use some similar scare tactics but they make sense narratively and are used sparingly. Most everything in this game is very narrative driven and I think that’s what makes it stand apart from Layers of Fear and even many other horror games.

It probably seem like I’ve spent this enire review giving this game props without complaint. That’s because overall the experience overrides issues I may of had with it. But if I have to make a complaint I’m going to follow it up with a reason that it didn’t really effect my overall thoughts on the game. The storyline was fairly predictable but it was well pitched and I was drawn in anyway. There were a couple bugs that were fixed by a restart but again, they didn’t bother me because it was an easy fix and something that will probably be patched anyway. I didn’t lose any progress because of it.

If you like good, creepy atmosphere, a world that draws you in, and a well done narrative, then you should probably give this horror game a try. It’s smart and well done. And while it can be a bit predictable in story, it makes up for it with a good, well thought out presentation. I’m starting to feel like Bloober Team might be the place to go to get that pyschological horror fix. I’ll definitely be keeping an eye out for their next project.

Very atmospheric and surreal horror game. The gameplay is entertwined with the story which gives the game a lot of substance. Environments are really well done. Detective portion of the gameplay is well done.

The story is a bit predictable and some parts of the game can be a bit difficult to figure out.  I had a couple bugs that could only be fixed by a restart.