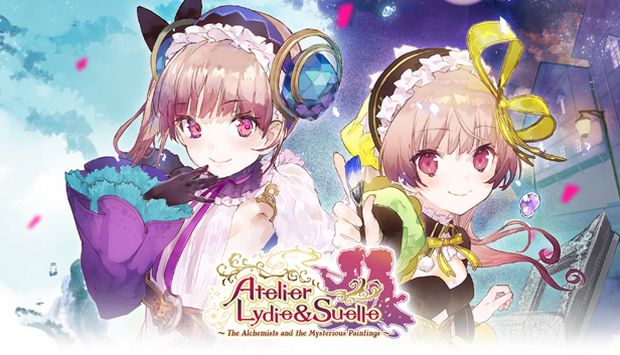 Alchemy with a hint of slice-of-life anime. Pastel colors and cheery characters with high hopes. I never thought I’d say this, but I genuinely enjoyed Atelier Lydie & Suelle: The Alchemists and the Mysterious Paintings. Celebrating 20 years of Gust and Koei Tecmo’s magical franchise, Atelier Lydie & Suelle is the kind of game that sneaks its way into your heart. It’s ripe with camaraderie and aspirations to be the best in the world. With a fresh take on the JRPG genre, this release turned my expectations upside down.

Lydie and Suelle are introduced as twin sisters living with their father in an atelier (an artist’s workshop) just outside of a grand castle. The two struggle to survive the harsh realities of life by crafting low-end items for the handful of customers they have. When they aren’t crafting, they take up odd jobs to make ends meet. Upon discovering magical paintings, the girls realize they can use the otherworldly materials to make amazing things and their journey to be the best atelier takes off.

Atelier Lydie & Suelle mixes things up in several ways that make the game feel different from most JRPGs. For one, providing two protagonists gives the player some diversity in how they play and what they can craft. Lydie and Suelle have a lot of differences that fit into what they can and can’t do. Switching between the two and understanding the subtleties of their characters is important to finding the right solution for many situations.

As the game progresses, the girls will be able to freely travel across three unique maps that allow players to explore the world and gather any materials they need. Materials are key because alchemy is the most important aspect of the game. Being great alchemists is the end goal, so practicing and leveling up each sister in their profession is one of the driving forces of the game’s narrative. By crafting better items, the girls advance through an atelier ranking system, which in turn grants them access to more paintings.

Unlike most games, the major conflict in Atelier Lydie & Suelle is contained in the quest for self-improvement. There is no direct antagonist to block the twins path. However, our heroines will encounter all manners of people along the way, from singing blacksmiths to mask wearing weirdos. The colorful characters Lydie and Suelle meet add a lot of life to a game that balances the hardships of being a starving artist, and the dreams that come with young adolescence.

Part of what makes Atelier Lydie & Suelle so great is how everything intertwines with one another. To reach more paintings, the girls must rise through a royal ranking system by gathering or crafting specific items. They also have to grow as a business, so the twins regularly set small goals in order to expand their influence with the people of their town. Goals might include fighting monsters to stir up buzz, or simply trading with merchants to gain their trust. Likewise, Lydie and Suelle can look for jobs on a bulletin board to make some money on the side

Everything can be done at once, but jobs will have time limits to them. Yet, even with so many things to do, it never feels overwhelming. All the objectives play into each other to help the duo grow stronger as individuals. Better still, it felt like I could go off and enjoy the little slice of life moments before going back to focusing on improving my alchemy.

Very early into the game it becomes clear that crafting is at the heart of the game. Almost everything you need will come from the hard work these girls put into their cauldron. Most merchants only provide ingredients for the recipes used in the atelier. The blacksmith, Hagel, provides weapons and armor for the girls so long as they provide the supplies. Everything else is up to the twins. That means when a battle is getting down to the wire, you’d better hope you crafted healing items or bombs to get you through. I found this to be a great way to get players comfortable with crafting, and it made alchemy feel less like a chore. Not only are you helping the two improve their skills, you are creating a stockpile of crucial items for adventuring. And let me tell you, adventuring can be rough.

A PINCH OF STRATEGY

There is a limited amount of ingredients you can gather during any excursion before you are prompted to start dropping items. This forces you to return home to add materials to storage or use them in alchemy. Alchemy itself is pretty straightforward; you can choose what to craft, which ingredients to use and whether you want to add a catalyst. Depending on what combination of ingredients and catalysts you pick, the final item can have stronger or weaker effects. I do wish the catalyst system was explained a little better, though. The amount of effects and symbols included into the crafting can be overwhelming for new fans of the franchise, especially since a lot of them do not explicitly state what will change. That said, the rest of the crafting experience was fairly painless to learn.

While gathering materials, Lydie and Suelle will inevitably have to face off against monsters in classic turn-based combat. In the beginning, the two will only have access to one skill each. Lydie can support her team by pushing an enemy’s turn to a later time and Suelle can output more damage. As you move on through the levels, they will obtain more skills for their set roles and eventually a third party member will be added. Spoilers aside, this character has a unique skill that allows the character to step in front of allies and take enemy damage, protecting the intended target from harm. On top of that, only protective characters like Lydie can use items such as Healing Pads, making it important to plan out who attacks and who uses their turn to heal friendlies. After playing so many JRPGs with the same set of rules, Atelier Lydie & Suelle opened my eyes to what modern JRPGs could be if they were more innovative.

For having been originally released in December 2017, Atelier Lydie & Suelle doesn’t really harness the power of the PS4. As with most JRPGs, the very large towns and environments feel extremely devoid of life. You can interact with just about every character you come across, but they are so few and far between it’s quite annoying, even sad, to travel to speak with them. The textures and character models are great, but the explorable parts of the map are so narrow and linear it feels like playing something from last decade.

The running animation and the stale camera also feel kind of rigid. Most of the time you’ll be traveling on foot to gather information or materials. During this time Lydie and Suelle feel a bit robotic and lifeless. The game only feels like there are people involved during the cutscenes and other character-to-character interactions. The feeling of vacant space in such a confined and linear game really set me back.

Atelier Lydie & Suelle is a heartwarming story of two sisters surviving the world by relying on each other’s strengths and covering their weaknesses. Every step of the way has its fair share of laughable moments and admirable scenes. While it lacks the visual depth of a modern day PS4 game, it definitely fills that void with beautiful art and gameplay that deserves more respect than I had originally given it. It is one of the most charming and easy going JRPG games this console generation has seen, and I will certainly be crafting cute items for days to come.