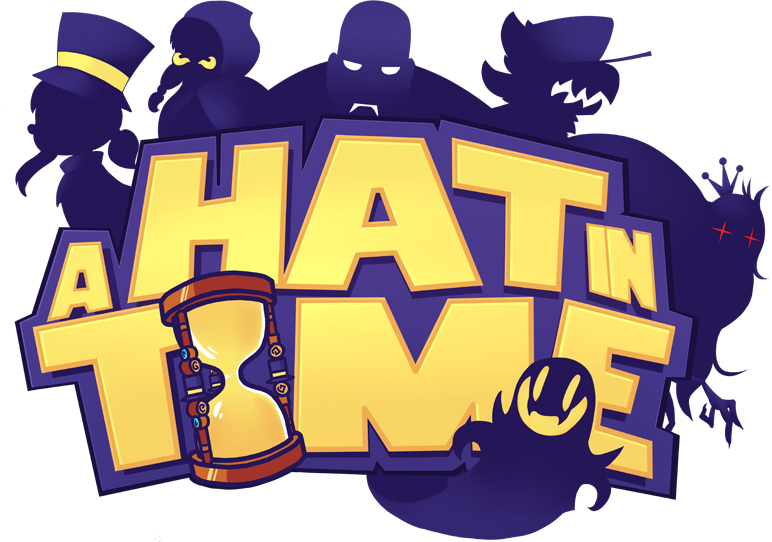 A Hat in Time turned out to be an unexpected gem that is very reminiscent of past character platformer games such as Mario 64 or Spryo the Dragon. Well done platforming, an interesting cast of characters, excellent boss fights, and a great overall charm make A Hat in Time a game you won’t want to miss out on.

You start your adventure as Hat Girl on a spaceship hovering by a planet. The ship uses time pieces as fuel which are little hourglasses that have time essence inside them. Before long things go badly when Hat Girl’s flight home is interrupted by a member from the nearby planet of Mafia Town. The imposing mafia member (wearing an apron with “kiss the cook” on it) is knocking on the window of the ship asking payment for the toll. Even in space you have to pay the mafia.

Our hat wearing hero refuses and the mafia proceeds to break through the window which in turn sucks all the time pieces (and hat girl) out the window, scattering everything everywhere. It’s here that your adventure starts and it quickly throws you into the game. You’ll have to find the time pieces to continue the journey home. The ship serves as a central hub where you’ll gain access to new worlds as you progress and find more time pieces.

Shortly after landing in Mafia Town you meet a character by the name of Mustache Girl. And yes, she has a mustache. Curly ends and all. This introduction sets the tone for the rest of the game. It’s full of humor and frankly, doesn’t make a whole lot of realistic sense. I mean, A Hat in Time is pretty weird. But in a charming and fun way. I found myself chuckling quite a few times throughout the game.

Don’t Leave Home Without It

The main mechanic of A Hat in Time is your character’s hat. Hence the name Hat Girl. As you play through the game you’ll find different kinds of hats that give her different abilities. The first hat can be used to show you a general direction of where you should be heading. Another will make Hat Girl run fast. Another one allows you to use platforms that are on another plane of existence.

On top of the various hats you can also buy pins that augment the hats with even more abilities. A magnet pin pulls collectibles towards you. There is a pin that gives you the ability to swing on various objects. And another that gives Hat Girl an umbrella so that she doesn’t get hurt on long falls. These can be bought from a strange creature that shows up periodically throughout different levels

On top of having all these different variations, you can switch things up at any time. A touch of the shoulder button opens up a radial menu where you can switch between hats in order to help with whatever situation you may be in. The pins themselves stay on no matter what hat you’re wearing but you can also change those at any time once you have purchased them.

It’s a great mechanic that is used throughout the game in some very creative ways. It keeps the game fresh and interesting through the entire game. Between the hat mechanics and the various characters and worlds, I never once got bored in my playthrough.

This Girl Can Move

On top of obtaining a plethora of different abilities, Hat Girl is quite mobile. Right from the start she can double jump. Add to that a mid air dash and you have the equivalent of a triple jump right of the bat. It makes getting around a lot of fun. Couple this with other abilities that help you get navigate the world and you’ll find that platforming in A Hat inTime is a blast.

Don’t get me wrong, that’s not to say there is no challenge. All the levels are designed to work with your abilities and some sections will definitely stretch those platforming muscles. Especially if you decide to collect some of the hard to get collectibles. But it sure is a blast moving around the world so easily.

On a side note I had a little issue at times with platforming because I couldn’t see my shadow. It was hard to tell where I was going to land. There is also boss I fought later on that drops bombs on you but I couldn’t tell where they were going to land and was hit many times. At first I thought this was just something I had to deal with in 3D platforming until I saw a video that showed both shadows and aiming reticles for the bombs. Not sure if it was just a bug on my game but it’s something to note and is one of the few issues I had with the game.

A staple of these types of games is the collecting aspect. A Hat in Time is no slacker in this department either. There are all kinds of items you can collect in each world. In fact, I found myself almost overwhelmed when I first started the game. The areas are fairly large and there are many places to explore and find things. You can find objects like yarn for making hats and collectible “relics”. And of course, the aforementioned time pieces are the main items you want to find.

For the most part everything you collect will be used at some point in the game and it’s not unusual to find yourself going back to worlds to find more items both to collect and to progress further in the game. Some of which are very cleverly hidden.

Variety is the Spice of Life

The different worlds are all varied from each other in a great way. There are five worlds (each with their own set of levels) plus a side world (more like an alternate dimension of sorts) that you play in occasionally as side missions. You access these worlds from various parts of the ship that unlock as you progress. Each is very unique from each other. In fact, some of the levels feel like a different game altogether. The different worlds include their own unusual cast of characters as well.

Keep in mind I use the term “worlds” loosely here. As well as “levels”. Each world is a huge, open area that follows a particular theme and is labeled as a Chapter. Mafia Town is full of members of the Mafia as either enemies or npcs and looks like a coastal town.

Another world takes place in a haunted forest and includes spirits and a creepy locale. There is even a haunted mansion level in this world that will through you for a loop. Not only is this mansion terrifying, it also changes the gameplay on you.

The point is that there is a lot of variety in A Hat in Time with its characters and worlds. And it’s all solid and entertaining.

The artstyle is on the cartoonish side even for a character driven platfromer. That’s definitely not a bad thing though. In fact, it actually adds to the overall charm. A Hat in Time is a very vibrant and colorful game and is easy on the eyes. The characters are also well done and memorable, adding to their unique characteristics. They all have their distinct own personalities that are expressed through great animations.

The game itself is pretty solid as well. I only came across a few graphical issues in my playthrough. Every once in awhile Hat Girl would get stuck on something and stutter for a second but the game was quick to fix itself.

On top of the graphics, both sound and music are well done and both add to the zaniness that is A Hat in Time. A lot of the sounds are almost cartoonish which, again, matches with the general feel of the game. Music is fitting as well but is still well produced and memorable. It’s actually not a bad soundtrack to listen to outside of the game and has a bit of a sci-fi edge to the sound.

When it comes down to it, A Hat in Time is just plain fun. It reminded me of a mixture of Mario 64 and Spryo the Dragon. It’s humorous and charming. It has a bunch of really memorable characters and diverse worlds that are very distinct. The only downsides might be a short run time and some minor graphical issues but it was never enough to ruin my experience. At the end of the day if you like 3D platforming games (especially from early Playstation days) do yourself a favor and grab a copy of A Hat in Time.