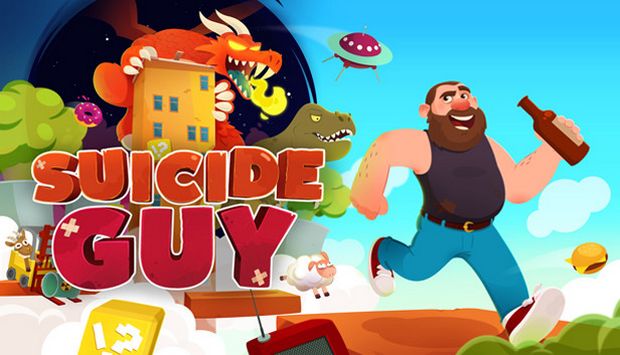 I wasn’t sure what to expect when I started Suicide Guy. The name alone had me questioning the content. The whole point of the game is to kill yourself in various, and most times, in ridiculous ways. After playing through, I can say that it’s not quite as bad as it sounds. All the suicide elements are in dreams and are done in a cartoonish way. It turns out that Suicide Guy is actually a short but entertaining puzzle game.

You start off as some no name lounging on the couch. This guy, who seems to be a bit of a slob, is quickly passing out on the couch, the TV still blaring in the background. As he falls asleep his beer slowly starts falling out of his hand. He finds himself in a dream and realizes his beer is in danger but is stuck in a dream which happens to be an old-fashioned diner. This is where you take control. It’s up to you to enter different dreams (Inception style. Sort of) and find ways to kill yourself so that you can wake up and save your beer from shattering on the floor.

This is a Puzzling Situation

The diner acts as a central hub of the game. The tables hold different objects and represent a level. On TVs around the diner is a picture of the beer midfall just so you don’t forget your ultimate goal. Outside you can see a giant beer bottle but it is inaccessible because the door is out of order. It seems like there should be some sort of symbolism here somewhere but you’ll quickly find the game doesn’t take itself very seriously.

There are 24 levels (each containing a puzzle) throughout the diner. Each is very different from the other so there is a lot of variety. Some of the puzzles are actually pretty clever. Some puzzles will take you seconds to figure out while others may have you scratching your head for a bit. I can’t delve too much into the levels without giving things away but I’ll just say that they were all varied and interesting enough to keep me wanting to get to the next level.

There are some obvious influences from other entertainment media such as movies and other games. An example is a level that is very obviously supposed to be a Mario level. Another is reminiscent of Indian Jones. A later level has you aggravating a giant white whale. Part of the fun is seeing the different themes for each level. You even summon a demon at one point. They are all convoluted and entertaining ways to off yourself.

A Touchy Subject but Not Really

On the suicide aspect I have to say that it’s all very light-hearted. You don’t see anything and there is no gore. And some of the ways you accomplish your goal are so ridiculous that it’s actually amusing. There is no deeper meaning here, no message or some kind of symbolism (at least I don’t think there is). It’s all very comedic and not serious at all. I have to admit that I found myself chuckling or at least cracking a smile throughout the game.

Okay, What is Going on Here?

The game itself is rough around the edges. It looks like an early version of some kind of sandbox game. Suicide Guy lacks polish. I felt like I was playing an early access game instead of a fully released version.

When you grab or pick up something, the character just holds his arms straight out. Whether it lines up with the object or not. When you jump at some platforms you climb the rest of the way up and there is no animation, the only indication being a grunt from the character. Crouching does odd things too such as being able to look up and see the characters shoulders floating in the air.

Mechanics of the game are fairly rough as well, which can be a bit frustrating. Most levels have you manipulating objects or platforming which don’t always work as you might expect. There are times you’ll find yourself redoing areas simply because you fell off the platforms and it’s not entirely your fault. All of this not a huge deal but I found myself getting a little annoyed a couple of times.

I encountered some bugs as well. Sometimes when you drop items they can either disappear into other parts of the level or objects or fly into the void altogether. Another level I played had a crane that glitched out so much I had to restart. The crane was slowly floating away from its base and when I tried to get on it, my character would vibrate right out of it.

Another glitch happened when I came back to the diner and couldn’t interact with anything. Which made it so I couldn’t go into the next dream. I thought I’d have to lose the save file but luckily closing the game altogether and restarting fixed the issue. Restarting the levels themselves fixed most issues I ran into.

I know it probably sounds like I’ve been bashing the game for the last few paragraphs and in a way, I have been. But none of these ruined the game for me. Like I mentioned this game is rough and feels like an early access game. But in this case it’s not really a bad thing. It didn’t bother me and frankly, I found most of it pretty amusing.

Think of something like Goat Simulator. It’s a bit rough-looking and is full of crazy glitches that add to the entertainment. This is Suicide Guy but in a slightly less manner. Some of the kinks actually gave the game its charm and almost matched the humor the game has going. So even though there were some frustrating moments my enjoyment was good overall despite the less then stellar graphics and mechanics.

It’s Over Before You Know It

Suicide Guy is very short. You’ll be able to beat the game within a few hours unless you get stuck on a particularly tricky puzzle. You’ll breeze through most of it though and, unfortunately, there isn’t much of a reason to go back after figuring things out. Except maybe for you or another person’s personal amusement. But at such a small price tag it’s not a deal breaker by any means.

All in all I was amused enough to finish the game if just to see what the other levels had to offer. This game is rough to look at sometimes but not horrible. And it never took away from the game being entertaining. Unfortunately there isn’t much in the way of replay value and it’s very short. It’s a game that doesn’t take itself too serious and I found myself entertained throughout. The puzzles themselves are actually pretty clever at times. For only 8 bucks (at the time of this writing) you can’t go wrong. You can kill a few hours and amuse yourself with Suicide Guy.