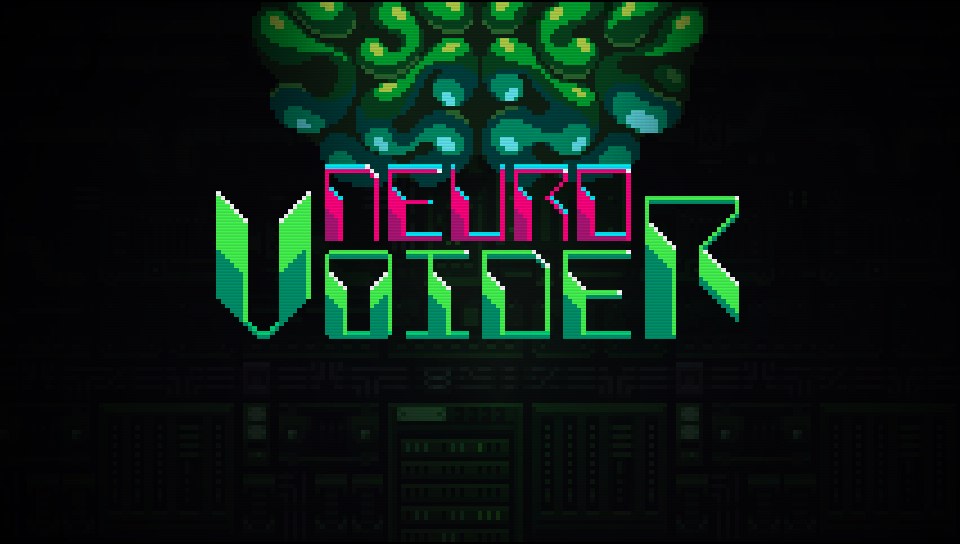 At first glance it would be easy to mistake NeuroVoider for one of many other twin stick shooters. While the game does have some of those typical gameplay elements such as dodging bullets and shooting down enemies, NeuroVoider is surprisingly deep. The game is challenging and fun but the loot and customization systems manage to make it stand out from the crowd.

THE END OF THE WORLD

It’s the end of humanity as we know it. Robots have overrun the world. Humans are all but extinct. All except a small number that are preserved as brains. That’s where you come in. You break out of your glass tube, hop in a robot body, and set out on a mission to destroy the other robots. That’s about as much story as you’re going to get out of NeuroVoider. But that’s not necessarily a bad thing.

The story is just a jumping off point to getting into the game. NeuroVoider is a cyber punk, top down, twin stick shooter with rogue like elements (rogue-lite according to the game) and plenty of action. It’s all about the gameplay loop and seeing how far you can get before you get killed. Which will happen a lot.

You have your work cut out for you when starting NeuroVoider. It’s a challenge that doesn’t waste much time to throw a lot at you. Part of that is because of the random nature of the game. You’ll have different level layouts and various enemies every time you start a game. Sometimes the game creates enemies that may be a bit overpowered for your current state. Especially the elites. I’ve had enemies kill me in one hit when I got too careless. However I never felt like it was the game’s fault.

You have a little bit of control in the difficulty as well. In a way. When you move onto a new level you get the chance to choose what type of level you are going to face. They each have their own risk/reward. One level might be small but have more Elites. Or it might be a large level  with lots of loot. Or anywhere in between.

At the start of the game you have a choice of three different classes. The first is Dash which, as you may have figured, is a quick robot that allows you to dash through bullets. Next is the Rampage which has a special ability that increases fire rate and shoots both weapons at the same time although it’s easy to overheat. The third class is the Fortress (my favorite class). It has higher hp and has the ability to create a shield that saved my tail on more then a few occasions.

After that you can pick a skill to go with your robot. There is quite a long list of both active and passive skills. An example of an active skill might be to slow down time for a few seconds. An example of a passive skill limits your HP but gives more energy regeneration. These all depend on how you want to play the game and give you plenty of choices to make things interesting.

THERE’S LOOT IN THEM HILLS

The main aspect that makes this game unique in this particular genre is the loot system. As you kill enemies and open objects on the map, you will acquire various types of modifications (called modules) for your robot. After passing the level you can add these different upgrades to your robot. They can affect health, energy, speed, etc and are class specific. To add even more to the whole thing, you can use scrap to upgrade modules you already have.

Weapons can also be changed out at this point. Unlike the other upgrades, you can choose whatever weapons you want despite the class you picked. There is a wide variety of weapon types as well. You have bullets, rockets, liquid, grenades, and so on. Each of those come in varying degrees as well.

One rocket launcher shot nice and straight and worked well for sniping groups of smaller enemies. Another rocket launcher I acquired later was stronger and but the flight path of the rocket was erratic and didn’t always go the way I wanted it to.

In fact, striking a balance with all these weapons and modules is part of what makes NeuroVoider interesting. In an early playthrough I had weapons that were very powerful but sucked my energy dry very quickly and I found myself running from enemies while my robot cooled down more often then not. On top of all that, each upgrade can come in different rarities. The more rare being more powerful and interesting of course.

This all leads to a ton of different options for your robot and subsequent playthroughs might be vastly different from each other.

A NOTE ON CONTROLS

I should make it clear that I played this game on the Vita. I mention this because I had some issues with controls at first and I think it would probably be much easier with a dualshock instead of the Vita. Unfortunately, NeuroVoider is not cross buy. I had to do some readjusting of my finger placement in order to not unintentionally hit the back touch pad which triggers skills and abilities.

Once I managed to retrain my grip on the Vita, I can say that the controls for this game are actually really nice. Everything runs smoothly and, for the most part, does what you ask it to. As much as I love my Vita, I’m guessing that the experience would be a lot better with a regular controller. Although I did get used to it.

THE FUTURE IS PRETTY (AND DARK)

The graphics in NeuroVoider look great. The whole thing has a pixelated look that works well with the setting. Animations look good as well and explosions are very satisfying. The levels themselves look like a small dungeon. You can use your map to see where you’re going and where you’ve been by holding the O button. The colors of the levels are mostly dark colored with splashes of brighter colors. Perfectly in line with most cyber punk settings.

The robots themselves are especially satisfying to look at. Even when they are firing bullets and bombs your way. Watching your robot change as you switch out components is really good as well. Both the look and animations are well done. You can tell a lot of effort was put into these little guys.

NeuroVoider is a very satisfying romp in the rogue-like genre. It has the challenge and the satisfying gameplay loop. Prepare for some frustration of course, this game can be unforgiving at times. But it looks good and the customization and loot systems are a high point for the game. I enjoyed my time with the game and found myself wanting to keep trying even after dying a lot.

I would suggest going with the PS4 version for two reasons. One, the controls are probably easier on a controller and while there is multiplayer, it’s only local. So if that’s your thing, the Vita is out on this one. With that said, it’s fun to have a game like this on the go.