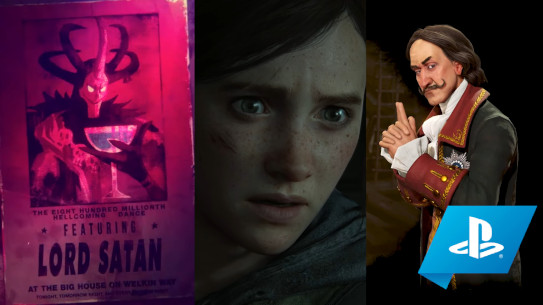 State of Play has come and gone with yet another laundry list of announcements. Not gonna lie, it’s a mixed bag, much like the others. But here’s a recap of September’s State of Play.

September’s SOP kicked off with an announcement trailer for the bizarre game, Humanity. The game itself is still a bit behind closed doors. According to the PlayStation Blog, it is a game about how “a transcendental being would interpret “human-like” behavior”.

The game is being developed by THA, a company that it isn’t directly a game developer, but rather a group of individuals making various computer media. It will also be published by Enhance who worked on Rez.

No concrete release date here, only a 2020 time frame.

A new cinematic trailer was released for Infinity Ward’s Call of Duty: Modern Warfare. It shed some light on a bit more of the story. The blog post tied to the trailer referred to the story as more or less how conflicts affect everyone.

The beta is currently going on and you can expect to see it litter store shelves October 25, 2019.

From the mind of Katamari Damacy comes Wattam. First announced back in 2014, the game fell off the Earth with some mention of it here and there, but finally, it’s coming. In the trailer, we see Katamari-esque characters roaming around, holding each other’s hands, and some are even eating each other for some reason.

The game’s Steam page indicates there is plenty of content to unlock with upwards of 100 characters waiting for the player to acquire. It also notes you can play solo or co-op.

This time around, Wattam was given a release date of sometime this December.

Arise: A Simple Story is the break-in title for Piccolo Studio. The game appears to take Norse inspiration with the trailer opening as your body is burned on land, a common tradition. The player then has to traverse across Limbo and go past landscapes that vary based on the past of the protagonist.

The player has to scale dark mountains and platform across giant dandelions. Not much is known about the game aside from what the trailer shows and what the PlayStation Blog says about it. The game is about the ups and downs of life.

Rockstar has finally launched its L.A. Noire VR version to PlayStation Tuesday. Putting you back in the shoes of Detective Cole Phelps. Not only can you solve mysteries, but they also took advantage of the VR. The VR version has new minigames that the player can take part in such as boxing, speed racing, and a shooting gallery.

L.A. Noire: The VR Case Files is out now.

In a tightly-knit 1-minute trailer, multiple games were updated for the State of Play. After The Fall, a co-op VR shooter by the same people who did Arizona Sunshine, got its release window set for next year.

The sci-fi-inspired Stardust Oddessy was announced. The entire game’s concept is to change what people think when playing sci-fi. It’s not made to be a cold futuristic design, but rather a nice and warm one. Your goal seems to be to sail across the sky.

Gorn, the overly cartoony gladiator VR title is making its way to the PSVR this winter. The game is off-the-wall and very physics-based, which means it’s ridiculously random on what will happen. Maybe while you’re pulling a guy’s head off it will just refuse to pop off for a while or they go flying in the air when hit with an axe.

With October right around the corner, MediEvil has released a demo under the name MediEvil Short-Lived Demo for players to get and get their hands on Dan’s Helmet. The demo is going to require the player go through and fight enemies and in the end, if you acquire the once Japanese-exclusive item, you will be awarded a “special challenge” in the full game.

The demo is – as described – short-lived as you can only get your hands on the demo until October 6. After that, you only have to wait until October 11 when the game releases.

For so long fans have waited for this, Sid Meier’s Civilization VI is coming to the PS4. This is a long-time coming as the PlayStation consoles have trudged over a decade without the turn-based strategy game on it.

Knowing how long it’s been, if you’re aren’t aware of the ins and outs or the details you need to be wary of, 2K gave a general warning.

As per their usual, Sony showed off their new PS4 Pro special edition for the release of Death Stranding. Being one of the most anticipated games to be released to the console, Death Stranding is the inspiration behind their next PS4 Pro limited edition.

The edition will include two hand prints across a white body. The controller is a semi-transparent yellow controller complete with just enough transparency that you can see some of the inner workings.

Death Stranding is coming to store shelves and digital marketplaces on November 8, 2019.

Oxenfree creator, Night School Studio, was the subject of a section of State of Play with a new trailer for their upcoming death-based Afterparty. Taking place in literal Hell, you control Milo and Lola on a mission to out drink the Devil in order to get back to their regular lives. But, before you can do that, you need to out-drink his relatives and deal with the generic party games and lava pits.

Afterparty is launching sometime this fall.

Unlike most of their announcements, they announced the next games to be free on PlayStation Plus. Those games being MLB The Show 19 and The Last of Us Remastered.

If you’re a fan of baseball then you may find this a decent deal. If you’re eagerly awaiting The Last of Us Part 2 and don’t have the original on hand, then here’s your chance to snag The Last of Us.

The Last of Us Part 2

No one can deny that they didn’t see this coming, The Last of Us Part 2 closed off the September’s State of Play with a 3-minute cinematic trailer complete with a concrete release date. Unlike its precursor, The Last of Us Part 2 puts you in control of Ellie instead of her somewhat father-figure, Joel. The story follows Ellie on a personal journey for revenge. The trailer ends with Joel tagging along.

The Last of Us came to fans in 2013 and then a remaster was released a year later. Fans will get their hands on this long-awaited sequel February 21, 2020.

There we go, that was the recap of what went on during September’s State of Play.

Other then TLOU 2 nothing really interesting to see, kind of a boring event if you ask me.

Personally, for me, my highlights / favorites were Arise: A Simple Story, Afterparty, TLOU 2, and maybe Humanity.

Humanity does look interesting, the reason why i didn’t list it, is because of the lack of seeing what it’ll actually be and the fact that it’s being developed by a non-game company. The latter can really go either way, making it an extremely great game or the worst thing ever released. So yeah, i’m in the wait & see camp on that one.