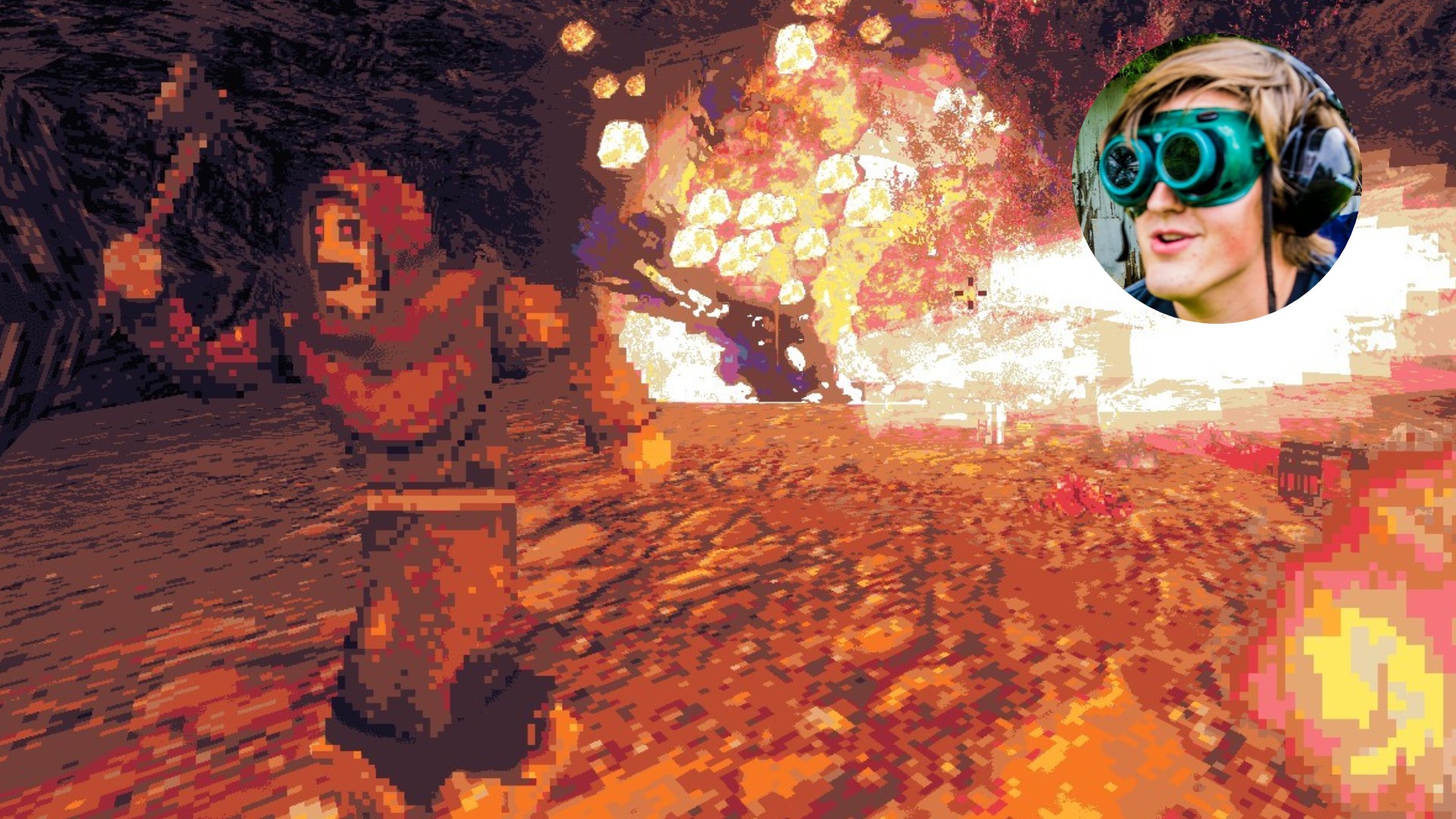 Earlier this week, 3D Realms conducted its Realms Deep event and with that came a slew of new, upcoming games. One that stood out to me personally was CULTIC, which saw a reveal trailer. Developed by Jasozz Games, this title sees you going around slaying cultists, monsters, and the like all, so far, for no reason.

I had the opportunity to talk with its sole developer, Jason Smith, about the game. We discussed its inspirations aside from Blood, the response people had, its future, how it could’ve only been a PC title, its hidden story, and more.

Gabriel Stanford-Reisinger: What were some of your direct inspirations behind CULTIC’s style aside from Blood? I know you listed off games you loved to play during the Realms Deep interview, but aside from Blood, which ones would you say spawned the most inspiration, be it level or character design, weaponry, the HUD, etc.?

Jason Smith: The biggest inspirations for CULTIC, aside from BLOOD, would probably be Resident Evil 4, in terms of environments, enemies, weapons, and audio design, and Jedi Knight: Dark Forces 2 in terms of retro aesthetic, control design, and level design.

GSR: Did you have a plan for CULTIC’s future – like making it into a series or just a standalone title and leave it be?

JS: CULTIC could definitely be expanded into a sequel, either directly or just another game in the universe, but it’s a bit too early to say. I would love to make a more survival-horror themed game in the CULTIC universe, for sure.

GSR: Were you always planning on launching the game beyond PC or was it initially meant to be only released to Itch.io or Steam?

JS: I definitely planned it to be a PC game, but the resources and expertise that 3D Realms is able to provide make expanding the game seem much more doable, and I know there are folks that would love to play it, that do not have a PC to play it on. I’ll do my best to bring it to any platforms that folks want it on!

GSR: How far into development did you know 3D Realms were interested in publishing? Were you in an early phase of development where you could just easily make modifications if they had suggestions or recommendations? Or were you in a state where you’d have to modify a ton of code and overhaul things?

JS: It was February, I believe, when they first reached out, and I started CULTIC in January. The game, at that time, was literally just the mass grave that you spawn in – that little dirt area. That was it. I had an early version of the axe cultist implemented, and the lever action and hatchet, and that was the whole game. Imagine my surprise that anyone was interested in such an early project! 3D Realms didn’t really have any major demands of me, and wasn’t looking to change my vision for CULTIC at all, which is a big part of why I wound up partnering with them.

GSR: Did you expect to get as much attention and praise for what little fans can see?

JS: Not at all, I’m honestly blown away by the response to CULTIC. Then again, I’ve constantly blown away anytime a tweet gets a handful of comments on it, or someone shares something of mine and talks about how excited they are for the game, or that 3D Realms was even interested in my little project to begin with!

GSR: Would you consider your game a good way to get into boomer shooters? I personally found the demo to be very fun and a great way to get into them if you were like me, who never really got into those types of games at their peak.

JS: I think CULTIC fits into a good niche for folks who enjoy games like DOOM, Duke Nukem 3D, and BLOOD, but aren’t necessarily into the new wave of retro shooters that focus more on huge arenas, hordes, and high mobility. It’s a bit more accessible in that way and places less pressure on the player to play the game a specific way, or die.

GSR: Is CULTIC just a “shoot all the things” type of game or is there a sort of story pieced together in time? Like, is there supposed to be lore that people can find or is it just you going about killing cultists and creatures?

JS: I’m really not much of a writer, but there is a story behind CULTIC, and mysteries for the player to uncover. I don’t know if this will be the kind of thing that involves voiceovers and audio logs and text logs and such, or if it will be mostly background storytelling where the player picks up bits of lore as they go, but I’m thinking it will be closer to the latter. Admittedly, the story is taking a backseat at the moment while I work on just getting the gameplay itself put together.

GSR: How do your family – if they know directly – feel about this sudden bolster in success in the game development field?

JS: My family and friends have been great at pushing me and keeping me going, despite the exhaustion and constant grind of working on this game on top of my normal 8-5 day job. Everyone knows that making games is my thing, and I’m always hopping from one project to the next, so I would imagine it was a surprise when one finally stuck!

GSR: Do you foresee the game changing that much by its release from the demo? Aside from the obvious “more levels and quality improvements,” that is.

JS: The demo feedback has given me a ton of feedback on balancing, difficulty, and quality of life adjustments that I can use to model what the average CULTIC player wants the game to be like. I’m happy to adjust the game to meet those demands, so long as they don’t compromise my vision for the game. That being said, I think the game was received mostly positively, so I’m comfortable staying on track and delivering more content and variety in the maps and enemies!

GSR: Do you always want to stay in this retro-style development or – if offered the resources – would you have made CULTIC into more of a modern boomer shooter and tried to basically make a modern-day Blood?

JS: I prefer to stay within the styles that I’m at least somewhat decent at, and I’m really not much of an artist, so I don’t think I’ll ever dip my toes into AAA graphics. I really prefer to focus more on gameplay and building an enjoyable experience, than striving to crank out realistic graphics that will be guaranteed to fall short of what studios with actual, talented art teams are producing.

GSR: What do you hope is in your future? Would you make an effort to find a career in other studios after CULTIC launches or keep the freedom you have making your own projects solo or with a publisher?

JS: My dream would be to have enough of a cushion from CULTIC that I could start developing full-time. This would allow me to develop expansions much faster, and continue to chase my dream of being a full-time developer. I’d probably continue to be a solo developer, though, as I really enjoy having full control over all aspects of the game, and keeping the art, audio, and game design in line with my vision for the project.

CULTIC has no concrete release date, but is expected to release sometime in 2022.