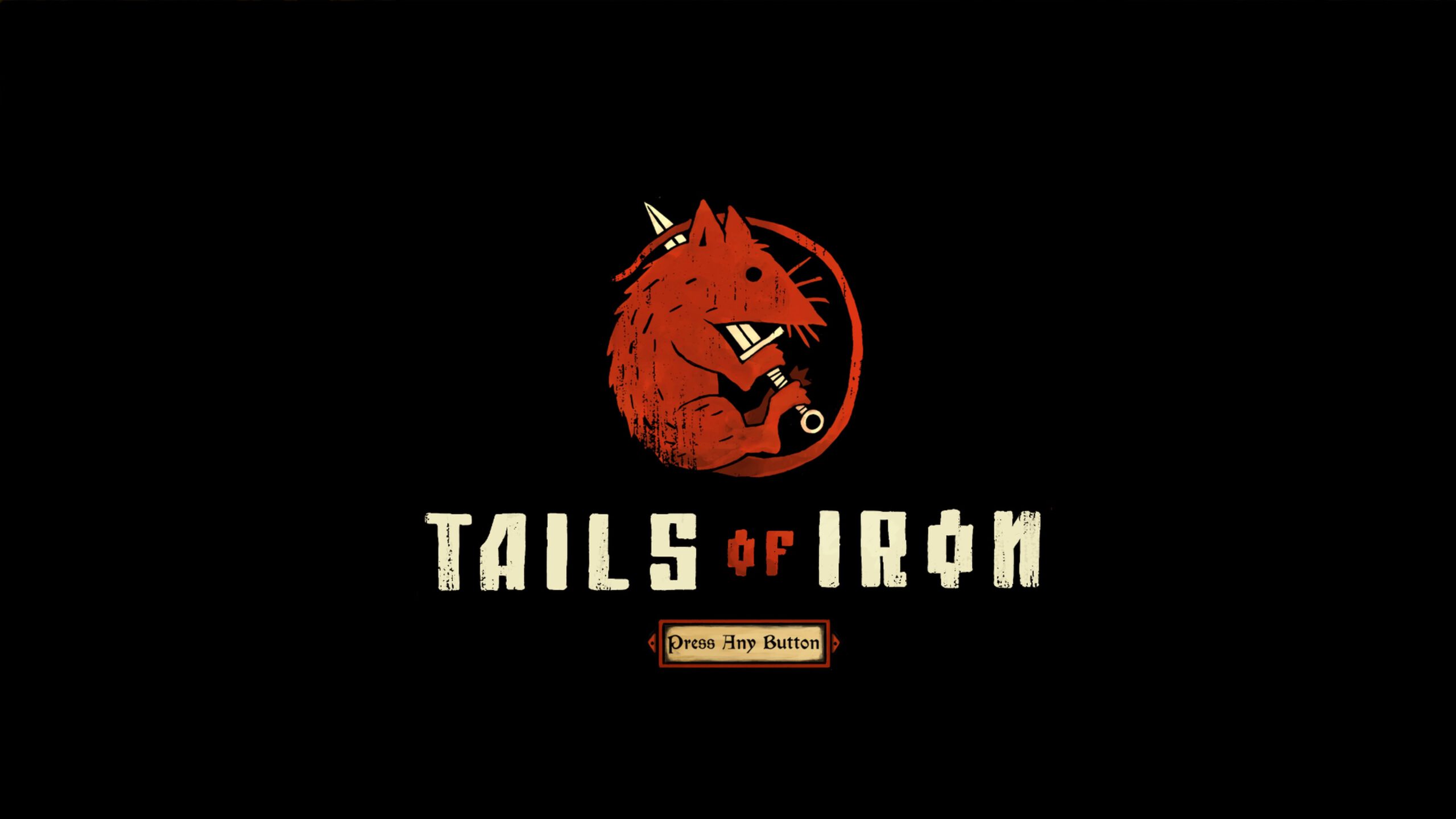 Souls-like games have come in all shapes and sizes, some borrowing less from the source material than others. While Tails of Iron has some of Dark Souls' DNA, it mostly tries to do its own thing by emphasizing action over role-playing. Odd Bug Studio's intentions are mostly successful, as Tails of Iron is a thoroughly enjoyable action-adventure with a great art style and some surprises along the way. 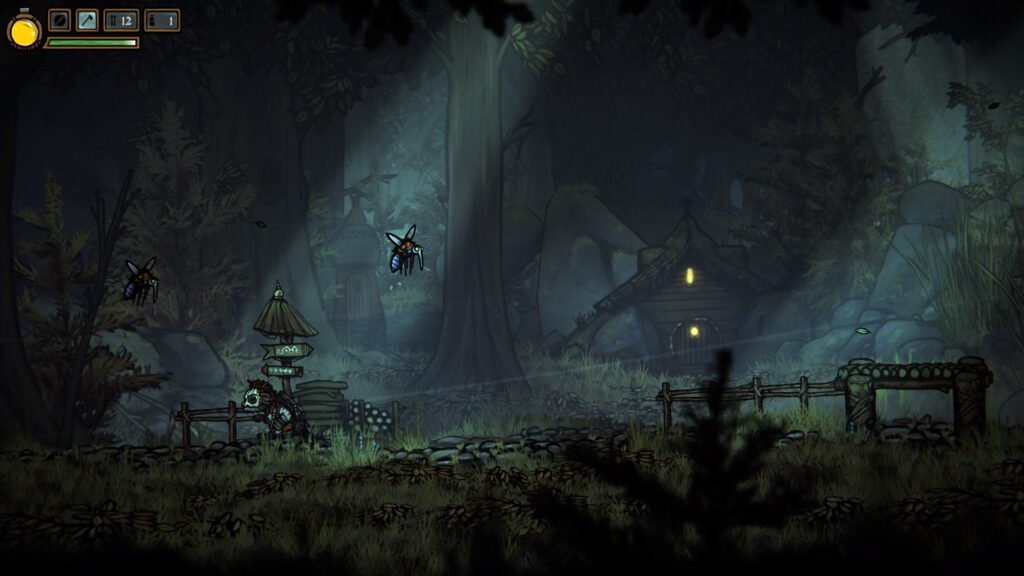 My Kingdom for a... wait, there aren't any horses

Kings, battles, and glory—these are what makes classical, but also possibly bland, chivalric tales. Tails of Iron is set in Ratdom, a kingdom of rats, and follows prince Redgi. Well, he's not a prince for long, as you get to win the throne at the beginning of the game. However, just as you earn your right, your father, King Rattus, gets killed by the cruel Greenwart, leader of the Frog Clan. They also leave your family's stronghold, The Crimson Keep, in ruins. It is up to you to save your brothers, restore your keep and kingdom, and exact revenge.

It's a solid premise, presented in an almost storybook format through Doug Cockle's narration. You probably know the voice actor as Geralt of Rivia. I have heard this guy's voice endlessly as the witcher, and he gives a performance basically the same as in that fantasy game. I am indifferent towards this baritone voice by now, but there are some lines Cockle delivers well with both dramatic and humorous inflections. Despite the anthropomorphic animals, the plot has a mostly serious tone that conveys its storybook fantasy tropes with slight subversion or surprise. However, that changes mid-way through, where the game reveals a clever change of theme. I won't spoil it, but I wish the game had been like it from the start. Regardless, it's a fantasy tale starring a cutely impish rat laying waste to salientian invaders—it's safe but okay. 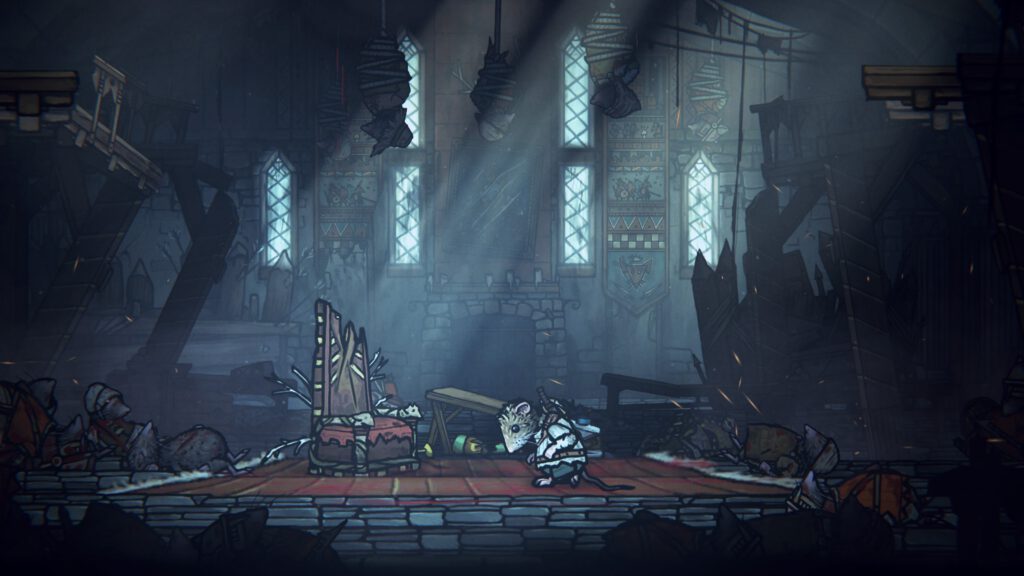 While the story didn't entirely grab me, the imagery often did.

Tails of Iron plays from a 2D perspective, and you are armed with a melee weapon and a shield. R1 unleashes an attack, holding L2 blocks, and

is a dodge. While these things sound simple enough, the game's challenge lies in the timing. A visual signal precedes each enemy attack, indicating if that attack is open for a counter, blockable, or unblockable ground/forward attack. It works well for the most part and adds for some leeway and risky situations (do you counter or just block?). However, getting up close to an enemy can sometimes remove the signal altogether, and an enemy will dish out a quick attack out of nowhere.

There are four enemy types, and your approach will vary accordingly. For example, the massive mosquito-like 'Mozis' will orchestrate when they land at you when they fly overhead. However, the giant variants of frogs are slower and stage attacks obviously, but they have more health. It's mostly a matter of knowing each enemy's animation and judging the speed of said baddie's move speed cycle. It's impressive how many enemy types, variants, and animations there are, and they all look pretty good. However, sometimes the hitboxes can be a bit unfair, especially with ground attacks. This is indicated by a circular icon, and enemies will try to slam into you and the surrounding ground to damage you. It seems like the area is too wide at times and that enemies spam this particular move. Besides that minor gripe, the game is ultimately fair. 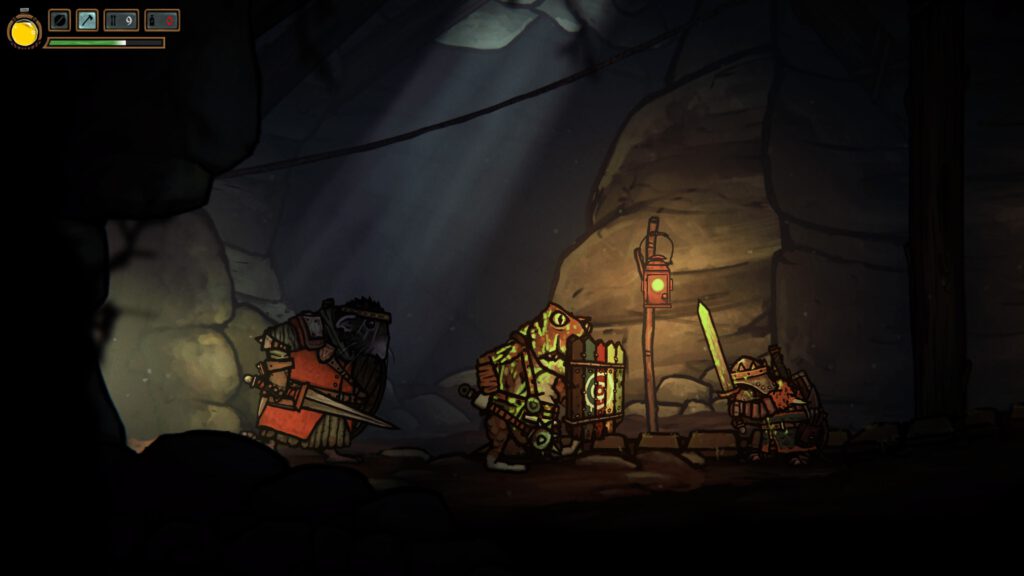 You will also have the occasional NPC partner to fight by your side.

Is it a Souls-like? Yes, but no

Throughout your adventure, you will pick up new armor and weapons. New equipment and the effects of wearing them are where the Souls-like elements are most apparent. Also, when you die, you don't lose anything substantial, but you do respawn on bonfire-like benches and drink from an Estus flask-esque health consumable called 'Bug Juice.' It is somewhat grating to lose what you had picked up, and there is none of the dense risk-and-reward of that said game. Anyway, every piece of loot has its weight and attack/defense stats. The more you wear/use cumbersome things, the slower you become. If you want to be a burly two-handed warrior, go for armor and weapons that weigh the most and are the most powerful. On the other hand, if you want to wear lighter things, you will be weaker but can dodge quicker and attack faster. It's delightfully Souls-esque, with your character rolling sluggishly while wearing a lot and slashing swiftly with light clothing.

However, this system feels very restricted and hollow. You can't remove weapons or armor, so I had to be unnecessarily worn down by weapons I didn't even use! Also, there is a grading system, but it is barely fleshed out. Loot is shown in different colors, but you don't know what ranking they genuinely are. There is also a 'Resistance' stat for different enemy types, but I often found this buff inferior to the overall defense rating. I recommend the latter if you are about to face a frog and want to pick between a piece of armor specializing in either frog resistance or defense rating. It's not the deepest, but the loot is fun to collect and wear. 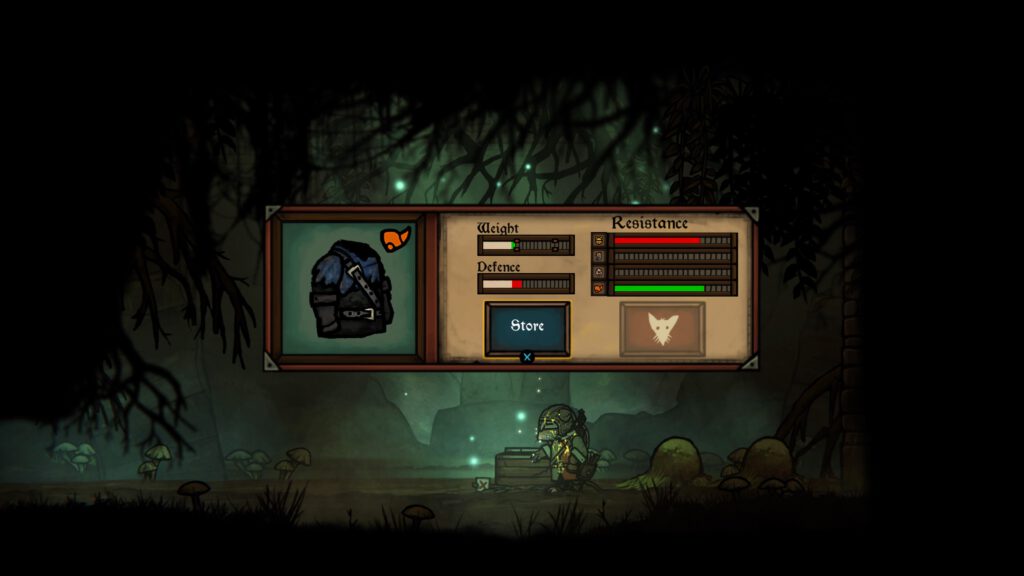 Another piece towards the "collect all weapons and armor" trophy.

The game is divided into four areas, each with paths, secrets, and quests. You accept side quests from an area's 'Faction Board,' which rewards players with currencies including Gold, Iron Ore, and Monster Parts. These currencies can be used to buy stuff from merchants, including cooking recipes (to boost your max health from the Kitchen,) blueprints (to craft new weapons at the Smithy,) and ammo for your ranged weapons (later on.) Collecting these materials, which can also be looted from dead enemies, is the driving force to progress the game. It was a pleasure to use these materials to restore the castle and kingdom and boost my arsenal. However, I do wish this was not the primary incentive.

I personally wish Odd Bug Studio could have fully embraced the RPG genre by adding a leveling system. It would've made forced enemy encounters more rewarding, allowing a more robust experience to level up instead of just picking up stuff. Sure, there isn't much of a grind, but gathering materials can get repetitive too. I completed the game in around seven hours, and I wanted a reason to replay. Maybe there should have been a new game plus mode, too. But, this is a personal preference ultimately, as the action-orientated approach remains a solid foundation. I wish it were a bit longer and had more replay value because you can 100% play this game in around 9 hours. There might have been more replay value if there was character leveling and a new game plus mode. Still, I never felt bored during the short playthrough I had, and the game is wonderfully compact as a whole. 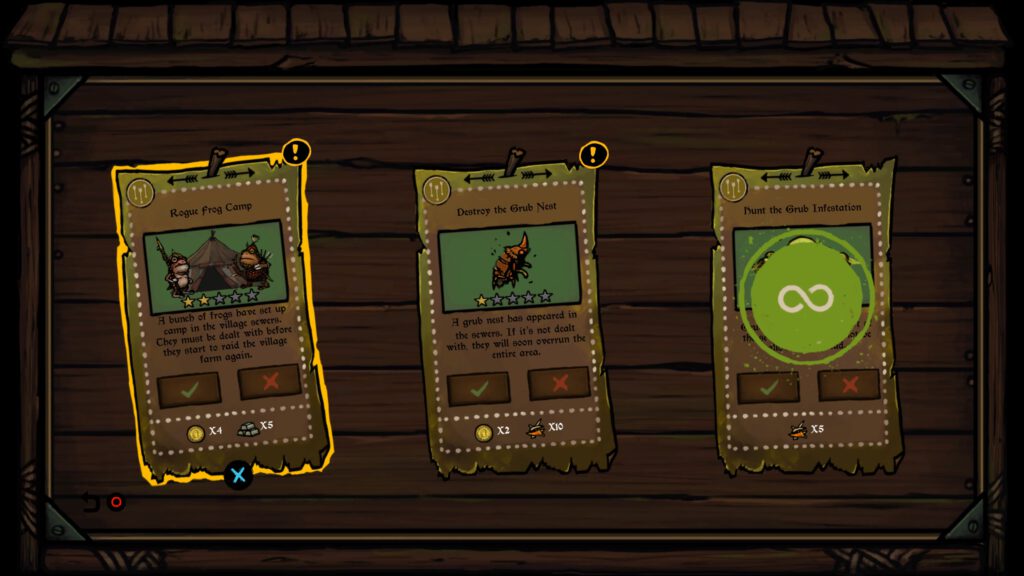 Sometimes, the main questline will force you to do these to progress.

Besides moments of tedious backtracking (I had to destroy the same obstacle every time I went into some areas,) occasionally repetitive enemy encounters, & some samey side quests, Tails of Iron is an experience that doesn't let you down. There are consistently fresh enemy encounters (new enemy types and unexpected mix-ups,) and the gameplay is brutally satisfying.

Even though you play as a cute little rat, Redgi will savagely cut down those who wronged his family. As you attack an enemy, you and your weapon will literally be covered in their blood. This is also an ingenious way of representing health, as the more an enemy is covered in blood, the closer they are to death. Bosses, however, will have health bars, and the boss fights are pretty well-made. They all have their own phases and cycles that are challenging and engaging. And although there are sadly only a few types of attack (a heavy, light, and charged attack,) the combat is indelibly impactful. 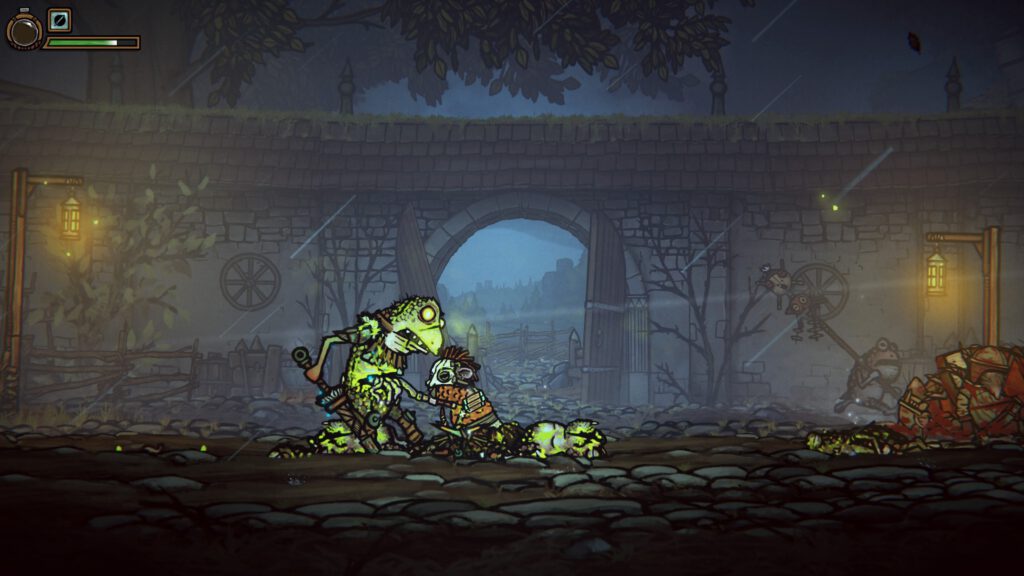 Look at that detail in this finisher animation—the entrails!

Along with its savage chivalry, Tails of Iron's greatest strength is its art direction. It has an inviting hand-drawn style and a 2.5D look, achieved through parallax level design and beautiful 2D lighting. The artistry of the compositions is impressive, seemingly inspired by Medieval art movements. There are also pieces of art inspired by simple storybook illustrations, as shown in charming speech bubbles (nobody has a voice except the narrator.) What I adore personally are the character designs and animations. Redgi himself is a likable character, and his movement cycle perfectly fits his rathood as, rather than running, he scampers. The gallery of enemies is also imaginative, boasting many mean-looking monsters and creatures. Also, the music is quite excellent in its form and mostly diegetic contexts. In the royal court, rats will lushly play the lute to convey harmony. During a boss fight, frogs will play tribal drums to add intensity to the battle. All-in-all, this game is a winner, especially when it comes to aesthetics. 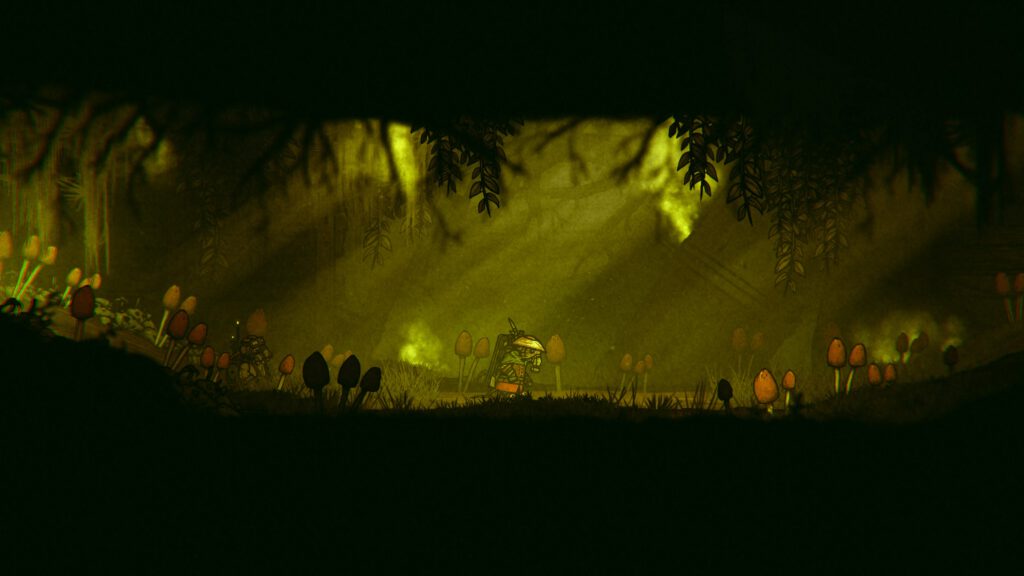 "A tale for another time"

While it may not wholly lean in on its RPG roots enough, Tails of Iron is an indie to squeak about. Its combat is punchy, and the charm of its striking art style is nigh-undeniable. Odd Bug Studio seemingly includes a tease for a follow-up at the game's end, so I hope Tails of Iron does not end up underrated—it deserves a sequel.

You can buy Tails of Iron on PSN here.


Be sure to check out more of our latest analytical reviews.