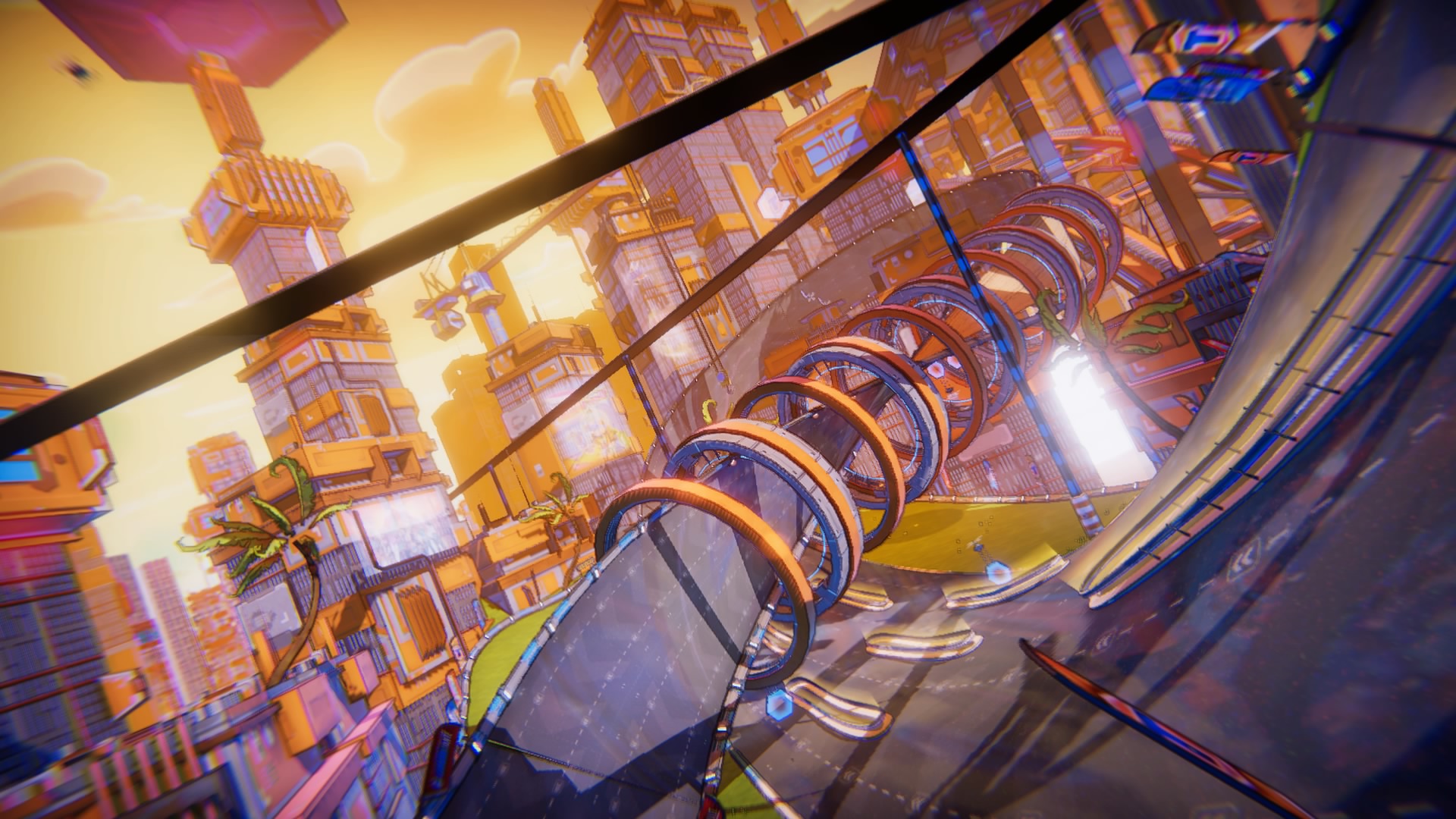 One major problem for the PlayStation 4 that most people don't seem to want to talk about is the serious lack of quality racing games on the system. Sim-lite fans really only have GT Sport and Project Cars to choose from, and fans of arcade racers face even slimmer pickings. There's definitely room for more options, so it's nice to see smaller developers stepping in to fill that gap, especially when they come in a package as creative, and bizarre, as Trailblazers, the new team-based racer from Supergonk Games that blends gameplay elements from Splatoon, F-Zero and Wipeout with a punk pop vibe reminiscent of Jet Set Radio.

The core gameplay mechanic in Trailblazers revolves around painting the track with your team's color. Any time you or a teammate is on a portion of the track matching your team color, you get a significant speed boost. Paint can be laid down as you go, allowing teammates behind you to catch up, or shot out in front of you to lay down a boost track for yourself. You can also use paint offensively, attacking cars from other teams and causing them to temporarily wipe out.

This team-based paint mechanic adds a remarkable amount of strategic depth to what might otherwise be just another F-Zero clone, forcing you to work with others for combined success. It doesn't matter if you cross the finish line first in multiplayer matches; if you didn't rack up the points through boosting and paint combos, you may as well have brought up the rear.

The key to victory in Trailblazers is intelligent and combined use of you and your teammates' paint to create long, unbroken stretches of boostable track. There are three levels of boost that can be achieved the longer you boost, each providing markedly faster speeds. At X3, you're really flying and can wipe out an opposing lead in mere seconds, but if you fail to own at least part of the track you'll consistently fall further and further behind. Races, even in the single player story mode, can become lopsided in a hurry.

One of the oddest, and likely most divisive, elements of Trailblazers is the surprising amount of time dedicated to story in the single player. There are over 30 chapters in Story Mode, each consisting of 1-4 races. The first 25 chapters all focus on one of the many oddball racers you can eventually choose from as they all fight to become the next Solar Cup champion, each with their own stats that affect how they race. Along the way you'll meet creepy lizardmen, alien frogs, psychotic robots, and a subplot dealing with the forbidden romance between an empress and a warlord who wants to replace his blood lust with love songs.

It's possible to skip over all the story cinematics if all you really want to do is race, but there's not much point in the Story mode if you do, as you can just opt to race online or create custom matches to run through by yourself or with a friend. Personally I found myself weirdly captivated by the wacky cast of characters Supergonk managed to assemble for this game. The plotting is ridiculous and often nonsensical, but in a way that seems deliberate and is definitely charming. I plowed through the Story mode, all the way up to the Solar Cup, in basically one very long and unbroken session. It probably did not hurt that most of the character art and dialogue in the game seems like it was ripped straight out of some of my favorite cartoons as a child of the 80s.

Next to the Splatoon-esque racing mechanics, the game's biggest asset is the overall aesthetic. Vibrant, cel-shaded visuals team up with an infectious punk-pop-dance soundtrack and the result is a game that is as fun to look at and listen to as it is to play. The various tracks in the game look great, ranging from sweeping cities to overgrown jungles, all with a color palette that really pops.

With a killer licensed soundtrack featuring artists like Skope and A. Skillz & Krafty Kuts, the music in Trailblazers matches up quite well with the look and feel of the game to create an overall experience that made for an enjoyable, upbeat weekend of racing. In an industry currently clogged with overly serious, grimdark games and stories, it's refreshing to spend some time with a game that seems so very eager to just make you smile.

A not-insignificant amount of the good will the game earns through its innovation and overall vibe is lost, however, thanks to a lack of polish that too often gets in the way of the fun to be had. Multiplayer games are rife with glitching players that will disappear and reappear just in time for you to crash into them, for example. I had to restart my PS4 a few times to clear out a bug that put the game into a weird, blurry tunnel vision, as well.

It's also far too easy to lose a race entirely thanks to minor mistakes, as even glancing a wall can send your car careening into other obstacles before grinding to a halt, disoriented and often facing the wrong way or stuck in a corner, all while opponents either fly by or increase their lead to insurmountable levels. I had to restart one race in Corkscrew City three times when a particular turn repeatedly caused my car to glitch out and I instantly found myself driving the wrong way while everyone else zipped right past me.

As bad as some of these bugs sound, none of them appear to be of the variety that can't be stamped out in short order with patches. More importantly, when the game works (which is the vast majority of the time) it's one of the best arcade racers currently on the PS4.

Trailblazers definitely needs some fine tuning, and more importantly needs the ability to create and host private online matches with friends (you are currently limited to local splitscreen or single player online), but for the budget price this is mostly a winner. Trailblazers comes recommended, but with the qualifier that you may want to wait for a few more patches to drop, first.