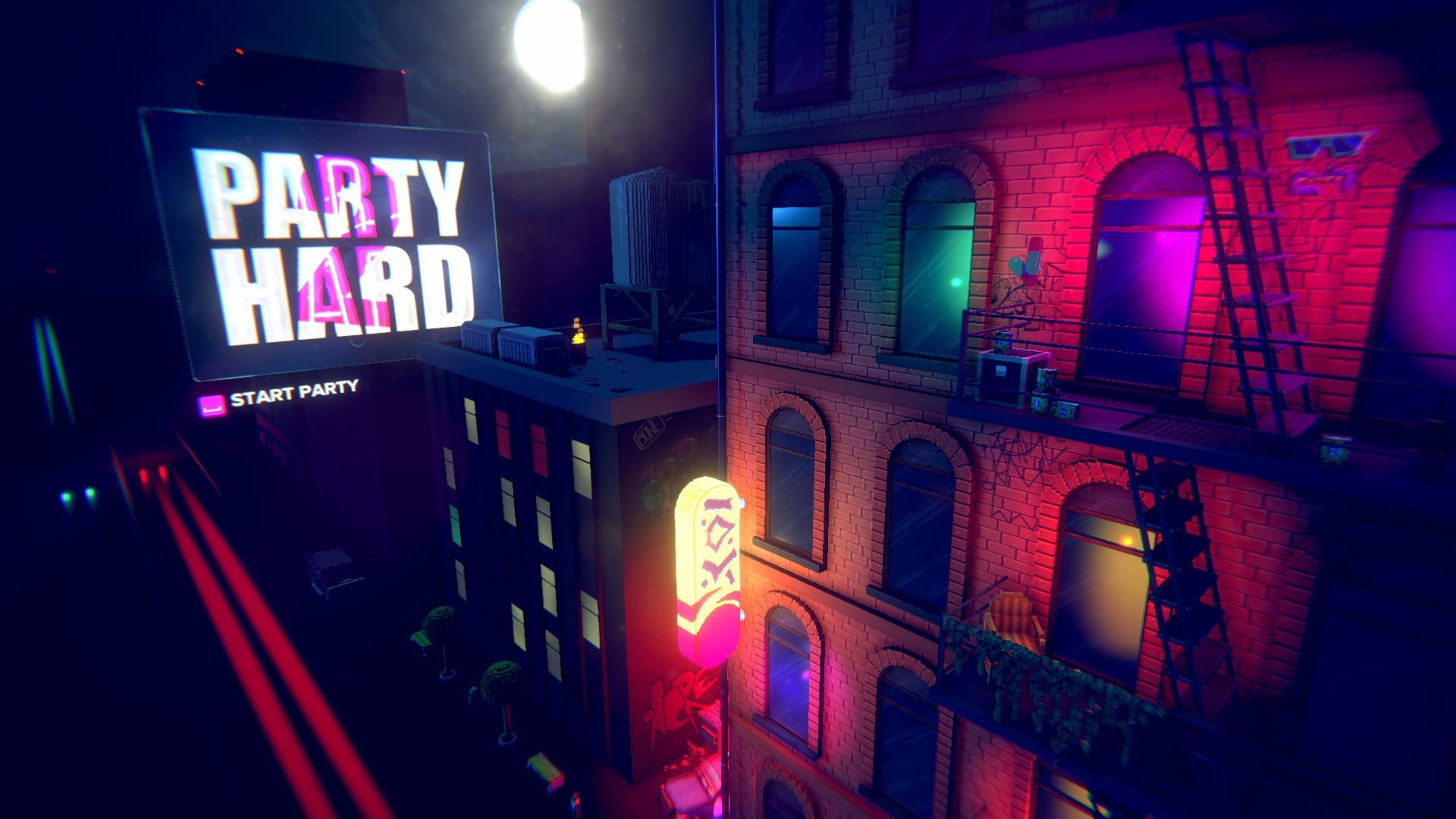 Published, like its predecessor, by tinyBuild and developed by Pinokl Games, Kverta, and Hologryph, Party Hard 2 is an action-stealth based game with enjoyable gameplay and fun mechanics. However, it's flawed at its core by minor errors and repetitive levels.

In Party Hard 2, we just can't seem to get any sleep because of the loud night clubbers. And we’re well past asking nicely for them to stop. How about we kill all of them instead? At least the majority of them. Other than a very straightforward introduction to the game, the narrative portion of Party Hard 2 is not what makes it a decent game. Sure, there are some narrative bits, but these are merely a means to string levels together so that you aren't just thrown senselessly from one place to another. So, if you're looking at Party Hard 2 hoping to find an A-okay story, I can easily tell you, this isn't it.

HOW TO GET AWAY WITH SEVERAL MURDERS

Party Hard 2's ultimate objective in every level, is to kill a few targets. Or everyone, in case you were feeling like going mass murderer. How do you go about these murders, then? The game makes something simple even more so by giving you the ability to use the "Killer Instinct" to analyze your surroundings. Not only will it highlight targets (which are already pointed out with a red arrow above them) but it will also tell you if there are any NPCs with special functions such as janitors and bodyguards, which are highlighted in orange. Last but not least it will highlight everything you can interact with in green.

Knowing where the good stuff is doesn't grant you success automatically though. You also need to create opportunities for yourself. Actually, scratch that. In Party Hard 2 there are very few instances in which you can actively open up the chance to kill someone. Instead, it's mostly up to the NPCs wandering around to walk by the wrong place at the wrong time. In these cases, patience is a virtue.

This is also Party Hard 2's biggest drawback. Other than careful planning, you will also need the game to work out in your favor to allow things to go the way you framed. More often than not, it doesn't happen.

Nevertheless, there can be some fun instances in which you can actually attract the unfortunate party-goers. If you're on the dance floor, you could place yourself near the speakers, dance to your heart’s content and lure everyone else to their own deaths as you blow up the whole area.

Or maybe you've picked up a condom and put it somewhere in your inventory, supposedly hidden from everyone's eyes. Party-goers can actually sense it on you and will automatically be attracted, looking for some fun. And as the gentleman you impersonate, it's only fair to comply. You then lure them to a secluded dark corner and push them down the ventilation vents.

Blowing things up in Party Hard 2 is all great fun and giggles until you forget to move away from the crime scene. All you can do is stare at the screen as the cops carry you to jail. But the feeling of accomplishment when you actually get away with it makes the game exciting and fun.

There are many traps you can come up with in Party Hard 2 as well. Water tanks laying around here and there? How about taking one near the DJ station and spilling it everywhere on the ground? Where clueless party-goers are dancing completely inhibited from drugs and alcohol? Remember to walk as far as possible though, unless you want people to call the cops on you. The ones that haven't been ruthlessly electrocuted at least.

The game encourages you to limit the usage of your standard weapon of choice, your knife or your fists, and take full advantage of the items you find: gas tanks, booze bottles, molotovs, frag grenades, cars... Everything you need to become the killer you were meant to be.

Party Hard 2's maps are huge, way more than its predecessor had to offer. In my first try in the hospital map, I was exploring to get a feel of the place and I was simply amazed at how expansive it was. There's a car park, the whole hospital building, a courtyard to the right, and then another smaller yard to the top of it. Imagine all the stuff I could interact with.

I blew up some booze barrels, got some other people poisoned with acid, and made a shelf fall on a bodyguard. However, the fun didn't last long and Party Hard 2 started proving to be an actual challenge. As well as extremely frustrating. Every little mistake can cost you a 10-minute run, and every missed occasion can make it 5 minutes longer.

HANDS UP, I SAW YOU!

By rule, party-goers seem to only notice murders when they happen in a cone-like area right in front of their eyes. While this is true most of the time, it also isn't. Due to some bugs, some party-goers seem to have eyes behind their head.  You can get spotted through walls or caught while in the act of killing someone standing somewhere secluded. Unknown factors trashed my runs more than once, contributing only to increase my general frustration at the game and discontent to a poorly made system.

Once spotted, people will immediately call the cops, and you rarely will have the opportunity to prevent it, as scared victims seem to run considerably faster. Once the cops are on the scene, there's no escaping. You can't outrun them because they are always running. While you are hindered by your stamina meter, they obviously aren't. You also have no way of killing them, unless you have something handy to blow them up with. If they hit you just one time, it's game over.

ONE CHARACTER, ONE DIFFICULTY

Party Hard 2 offers four different characters to play with. Each of them with unique abilities and skills as well as various extra perks. In a sense, they range from "easy" mode to "really hard". The game itself only offers two modes to choose from, Medium and High difficulty. However, it also gives you the means to cruise through levels by playing the character The Wannabe.

The Wannabe gives more stamina and more health. This makes the game considerably easier since, normally, everything could kill you if you are not careful enough. Playing this character won't allow you to unlock achievements and trophies though.

The standard character of Party Hard 2's story is the Party Hard Killer. He stands for the normal difficulty aspects of the game, without extra perks but with extra abilities. The game is meant to be played as the Party Hard killer, at least once. We also have a quite eccentric alien, Kao Tech and a Panda cosplayer. They both represent the highest difficulties of the game as well as the most challenging experiences.

SOLID, AT THE CORE

Party Hard 2 works well as a sequel. Improved graphics, art style, revised mechanics, as well as new ones. But core mechanics-wise, it doesn't add anything substantial that distinguishes it from its predecessor. Nor does it try to. Overall, it's very short and runs don't usually take more than 10 minutes each. Given that you don't end up having to redo the level over and over again. Most of the time this isn't even due to the player's distraction but to the game's still very clunky rules and mechanics. They tend to get in the player's way more often than not, especially when they aren't supposed to. While frustration is a feeling that many players enjoy due to the equation frustration = challenge, frustration due to poorly written mechanics is not okay. Performance wise, for a relatively small game, it actually doesn't run that well. Framerate drops and stutters hinder the game greatly. Loading times can get ridiculously long and even get stuck, forcing you to restart the game.

While Party Hard 2 doesn't offer a substantially new experience compared to Party Hard, fans that have loved the first installment in the franchise are sure to love its hilariously brutal sequel. For every other stealth based genre lovers, this is almost a must, offering hours of enjoyable content at a reasonable price.