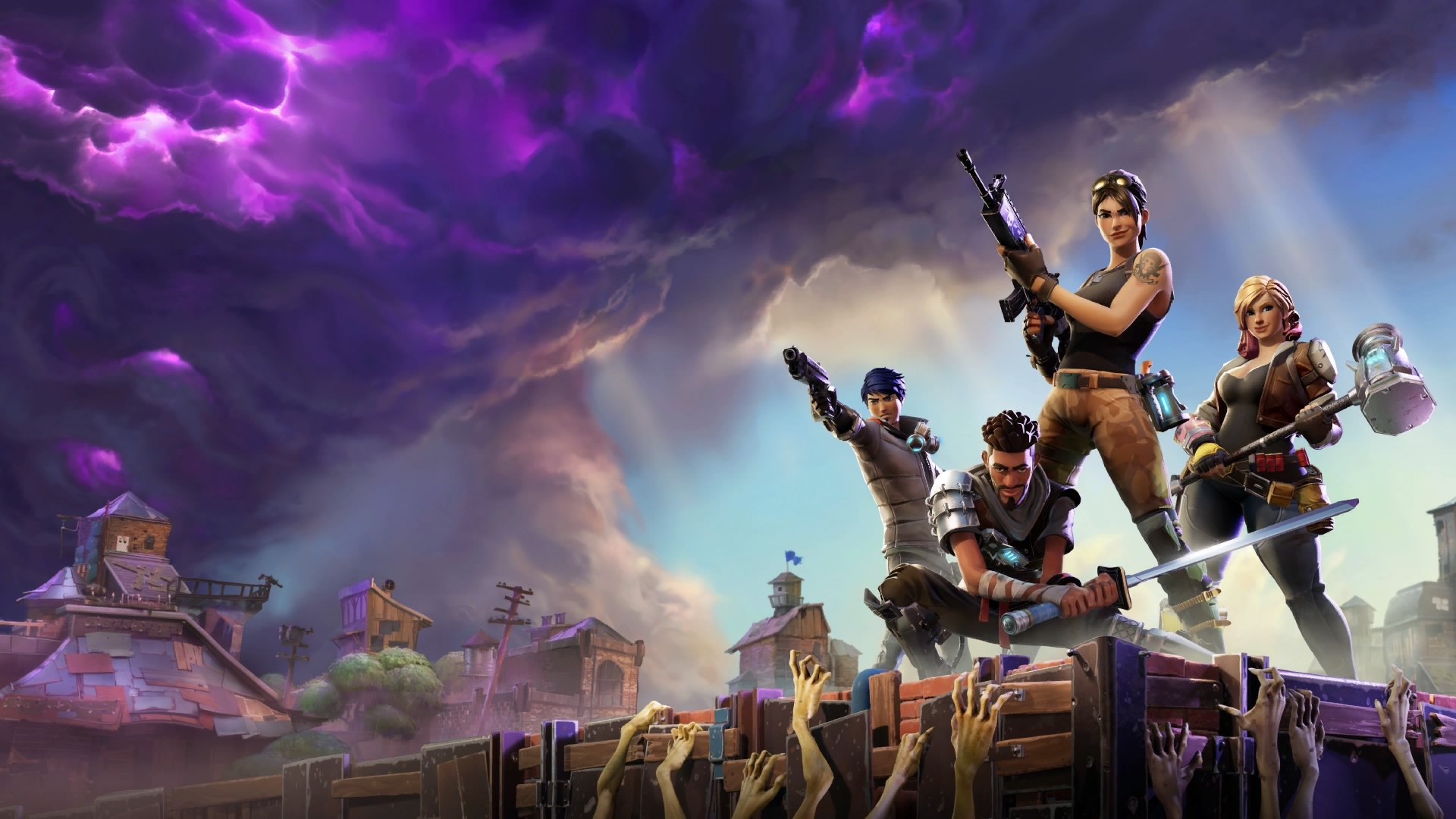 Editor's Note - This review covers only the Battle Royale portion of Fortnite. We will have a separate review for Save the World at a later date.

About one year ago, little known developer Bluehole Studio, Inc. launched Player Unknown’s Battlegrounds into Early Access on Steam. Seemingly overnight it became one of the biggest hits of the year, featuring an innovative concept – 100 players drop into a large, open map with nothing and obtain weapons and gear on the go as they battle it out for the ultimate prize of one chicken dinner. Now the most played game on Steam with an all-time peak of over 3 million concurrent players online, Battlegrounds seemed like a juggernaut that nothing could derail. Then came Epic Games, charging into the same new genre with a free update to their own early access title, Fortnite, which was originally conceived as a cross between Minecraft and Left 4 Dead. This new alternate mode, called Battle Royale and available on almost every gaming platform around, including your phone, has come to dominate the gaming landscape like no other title since World of Warcraft launched all the way back in 2004. But why, exactly, has it been so successful? Hop on board the Battle Bus and join me for a tour of 2018’s biggest game.

Similar to Battlegrounds, every round of Battle Royale starts in the air. The Battle Bus, a magical bus/hot air balloon hybrid, flies over the map and allows players to jump off at will, pick their landing spots and parachute down with nothing but a pickaxe; all other items, from guns to shield potions to bandages, must be procured on site.

There are dozens of prime locations to pick from, each with their own advantages and weaknesses. The most popular spot on the map, Tilted Towers, offers the best gear (which ranges from Common to Mythic), but that also means it draws the most players. You can jump to locations on the far reaches of the map, but that puts you at risk of being caught in the coming storm.

THE THUNDER ROLLS, AND THE LIGHTNING STRIKES

No matter where you drop on the map, chances are you’re going to eventually be forced to hustle to other locations. As soon as you land a storm begins brewing that, if you’re caught up in it, will slowly but surely kill you as it drains your health every second you are in it. To avoid the storm, you must be inside the Storm Eye, which constantly shrinks as the game progresses. This works to push players into smaller and smaller portions of the map, forcing confrontations. Every few minutes the storm begins to close in again, making sure that you’re almost always on the move, keeping the action going.

It’s possible to survive the storm if you do get caught up in it, provided you have enough restorative items and you’re not too far out, but it behooves you to keep a brisk pace. The result is some forced priorities – you can’t stop and loot every building you come across, but if you don’t gear up you’re dead. It’s a great mechanic (and yet another one borrowed from Battlegrounds) that ensures the action stays constant, always inching you forward to the next fight.

BUILD YOUR WAY TO THE TOP

While Battle Royale mode most definitely shares traits with Battlegrounds, with the same general concept, one key difference is the ability to harvest resources and use them to build various structures, which can be used to create new vantage points, lay traps or function as makeshift defenses in the heat of battle. With the help of your trusty pickaxe, players can break down trees, walls, cars and even appliances for wood, brick or metal and then use them to craft edifices to suit their needs.  Each material type has its own strengths and weaknesses; where it is faster to build things out of wood, brick and metal offer higher defense ratings and take longer for opposing players to bust through.

How quickly and efficiently you can build will play a significant role in your chances at survival.  Knowing what to build, when, and where is often the key to success. The build menu itself can be confusing at first, and building under pressure comes with some distinct challenges, as it’s hard to create complex structures while someone is trying to shove a rocket launcher up your backside. If you can master the mechanics, however, you will have given yourself a significant advantage over most of the players in any given match.

You can lone wolf it in Battle Royale if you like, but the game is at its best when you team up. To that end, Fortnite allows you to group up in teams of up to four people. When you play with a squad, you live and die as a team, but death is not always immediate. Most of the time, when an opposing player gets the drop on you and drains your health, they merely “knock you down”, allowing them to follow up with a coup de grace if they’re close enough. Often, however, your killer is too far away to finish the job, and teammates can revive you.

You can also share items from your inventory, though it’s clumsy and requires you to find a secure location in order to avoid other teams getting the jump on you. While you rummage through your inventory and decide what to drop, and how much, your teammates have to try and clear space in their own inventories to make room. As essential as teamwork is to success, it’s a shame that Epic has not found a way to allow players to more seamlessly swap items and gear, something that will hopefully be addressed in future updates.

TIER UP AND GEAR UP

As a free-to-play title, Epic makes its money on Fortnite through microtransactions. Smartly avoiding the loot crate mechanic that has become the bane of the industry, everything you can buy in Fortnite has an up-front cost and can be purchased whenever you want.

You can opt to purchase Battle Passes for $10 (USD), which are good for exactly one season, lasting approximately 90 days. Battle Passes help you earn XP faster, but also do allow you to randomly earn various items when you “tier up” by reaching the next level.

Thankfully, every unlockable item or piece of gear in Fortnite is entirely cosmetic and completely optional. Battle Passes will help you get cooler skins and items faster, but they’re not going to give you any tactical advantage over the competition. It’s nice to see developers finally taking the hint and removing such mechanics, and Epic even goes one further by allowing you to benefit from a friend’s Battle Pass even if you don’t have one, as they come with XP bonus modifiers for anyone who’s in your squad.

As good as the building concept is, and as helpful as teamwork can be, too many matches are derailed by shooting that is just not as good as it needs to be. Every console shooter requires a decent amount of auto-aim to assist players using controllers, as they’re not particularly good input methods for shooting games. Great developers do the best job of providing the proper amount of assistance for their particular game's mechanics while also making it seem like the player is doing all the work.

Battle Royale’s aim assistance is simply not up to the job, leading to many sloppy gunfights between players and even entire squads. It’s shocking, given that Epic Games is one of the legends in the realm of first-and-third person shooters, with all time classics like Unreal Tournament and Gears of War under their belt. It's readily apparent that the Battle Royale mode was indeed (at first) merely an addition to what was initially a much different game.

Ultimately what makes Fortnite the craze that is sweeping the nation is that it’s a social shooter unlike anything else on the market right now. While it very obviously cribbed many ideas from Battlegrounds, it’s combined them in a way that makes the game more sociable, more fun and relaxed than the self-serious title it drew inspiration from. The shooting mechanics aren't quite there on console, but it's the only thing bringing down an otherwise excellent game; the fantastic building aspects, teamwork and emphasis on fun and socialization make this game a winner.

The biggest problem going forward will be seeing how Epic’s ambitious plans for cross-play pan out, as right now anyone on a PS4, PC or iPhone can end up in the same match, which puts console and especially mobile players at a distinct disadvantage. Also, with Fortnite falling squarely into the Games as a Service model, it’s undoubtedly going to change drastically, and repeatedly, over time. We’ll be sure to check in on the game again in the following months.